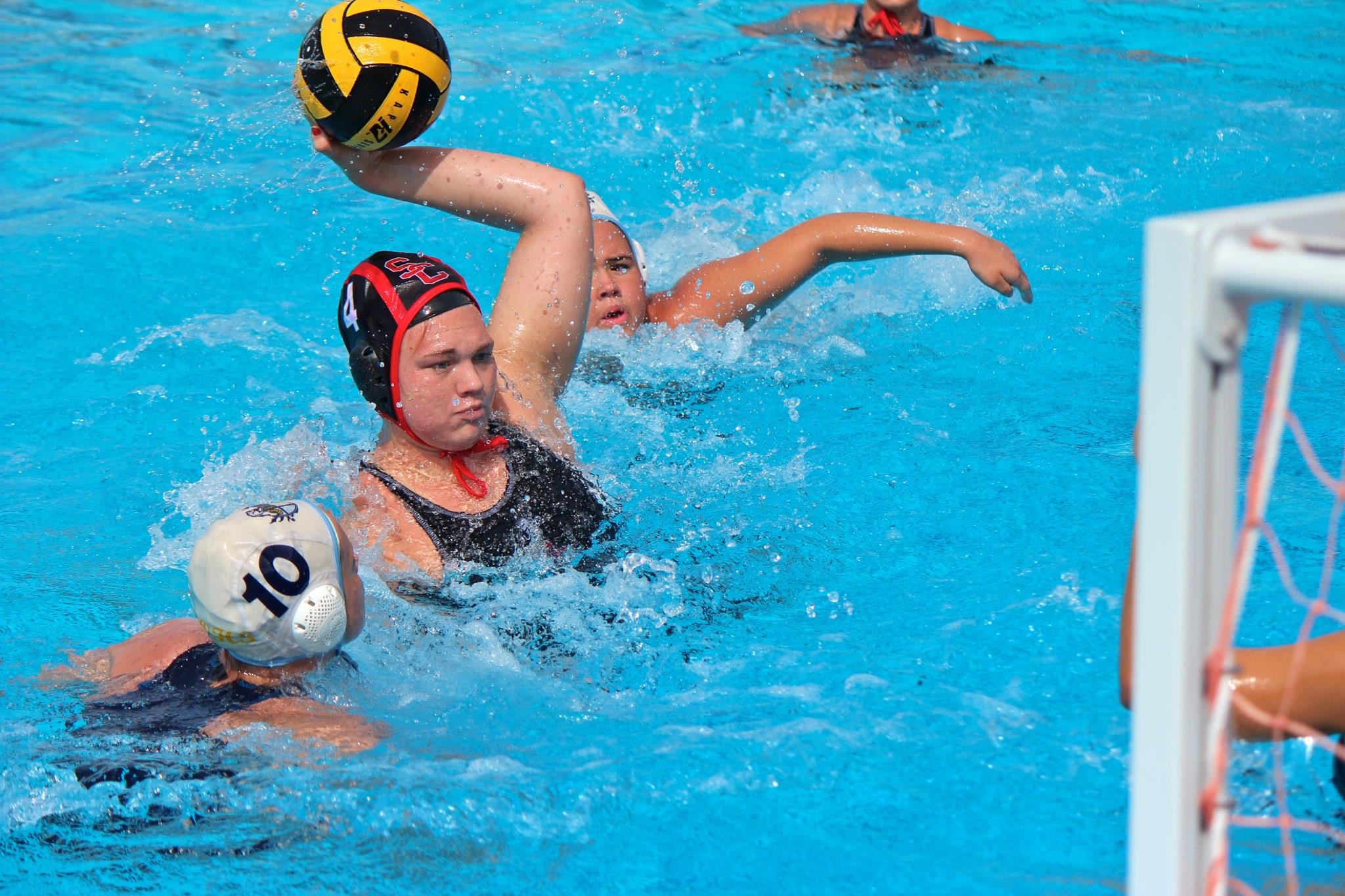 The San Clemente girls water polo team needed a big fourth quarter performance against Los Osos on Feb. 21 if they were to advance to the CIF-SS Division 2 semifinals.

After erasing a three-goal deficit in the final quarter, San Clemente’s Amber McCutcheon scored the go-ahead goal with 17 seconds remaining to give the Tritons a 14-13 quarterfinal victory.

San Clemente was set to face Agoura in the tournament semifinals on Feb. 25. Results were not available at press time.

The Tritons played the quarterfinal matchup in front of a home crowd at the Vista Hermosa Aquatics Center for the first time in program history.

San Clemente got production from up and down their lineup, as four different players scored two or more goals. McCutcheon led the way with four goals and four assists and Cassidy Smithson scored three times.

The San Clemente wrestling team benefitted from four CIF place-winners and a host of other strong performances at the CIF Eastern Division Individual Wrestling Championships Feb. 20-21 at Ayala High School.

As a team, the Tritons finished fourth overall.

The Tritons’ Tyler Meisinger took home the 154-pound title at the event, joining the ranks of Triton wrestlers who have claimed an individual CIF title.

Kyle Marshall and Mike Marshall both placed second in the 162 and 172-pound division, respectively. Alex Ames took fourth in the 197-pound class.

A double-double from senior Jenna Rodriguez and a 16-point effort from senior Emma Bankson propelled the San Clemente girls basketball team past Los Osos and into the second round of the CIF-SS Division 1AA Championships on Feb. 21.

Rodriguez scored 21 points and grabbed 20 rebounds while Bankson poured in three 3-pointers en route to her 16 points. Serena Saba had 12 points and eight assists in the Tritons wire to wire win.

San Clemente was set to play Crescenta Valley in the second round on Feb. 25. Results were not available at press time.

Following a scoreless first half of play against Buena in the first round of the CIF-SS Division 1 Championships on Feb. 20, the San Clemente boys soccer team erupted for four goals in the final half for a convincing 4-0 victory.

Sophomore midfielder Fernando Vasquez started the scoring barrage when he sent a loose ball in the box into the net early in the second half to make it 1-0.

Senior forward Matias Ledesma scored the Tritons next two goals, the first of which came off a header several yards away from the goal. The Buena goalkeeper came out to defend a long Tritons cross into the box, but Ledesma beat him to the spot and flicked the ball up and over for a 2-0 lead.

Eddie Molina tacked on a late goal to send the Tritons into a second round matchup with Paramount, which was set to be played on Feb. 25. Results were not available at press time.

Trailing Tustin by two points with 12 seconds remaining in their CIF-SS Division 1AA second-round game, the San Clemente boys basketball team got the ball in the hands of Sam Darnold, their leading scorer and most reliable shooter.

Darnold came off a screen and got an open look from 16 feet out, but the ball clanged off the rim as time expired, ensuring Tustin held on for a 61-59.

“We got (Darnold) a great look and we got him a wide open 16-footer,” San Clemente head coach Marc Popovich said. “You tell me we’ve got the game on the line and Sam’s going to line up a 16-footer … I would have signed up for that five hours ago.”

Tustin quickly overcame a seven-point deficit in the third quarter behind senior guard T.J. Shorts’ ability to drive to the paint, create contact and finish. After his teammate George Wilson converted a four-point play in the quarter’s opening minute, Shorts made good on a three-point play opportunity on the Tillers next possession to take a 39-38 lead. Tustin would outscore San Clemente 24-14 in the third quarter.

Shorts scored a game-high 24 points on the night and Wilson added 20.

“(Shorts) carved us up … He’s so hard to contain. He’s so good at drawing contact and staying under control,” Popovich said.

Tustin padded their lead until late in the fourth quarter, when Darnold hit a deep 3-pointer to make it a four-point game at 61-57 with just over one minute to go. San Clemente senior Scott Herrod knocked down two free throws and Cole Fotheringham forced a Tustin turnover on the ensuing possession to set up the game’s final dramatic moment.

The Tillers, who have won 19 games in a row, now advance to play Millikan in the postseason’s third round on Feb. 27.

The loss put an end to San Clemente’s 12-game win streak and the team came within one win of tying a school record for most wins in a season.

“It was a tremendous season. It was the best season we’ve had since I’ve been here,” Popovich said. “These guys gave everything they had (tonight). It was a great, great effort and that’s what these guys have given us all year.”

San Clemente advanced to the second round after defeating Downey 54-43 in the opening round.