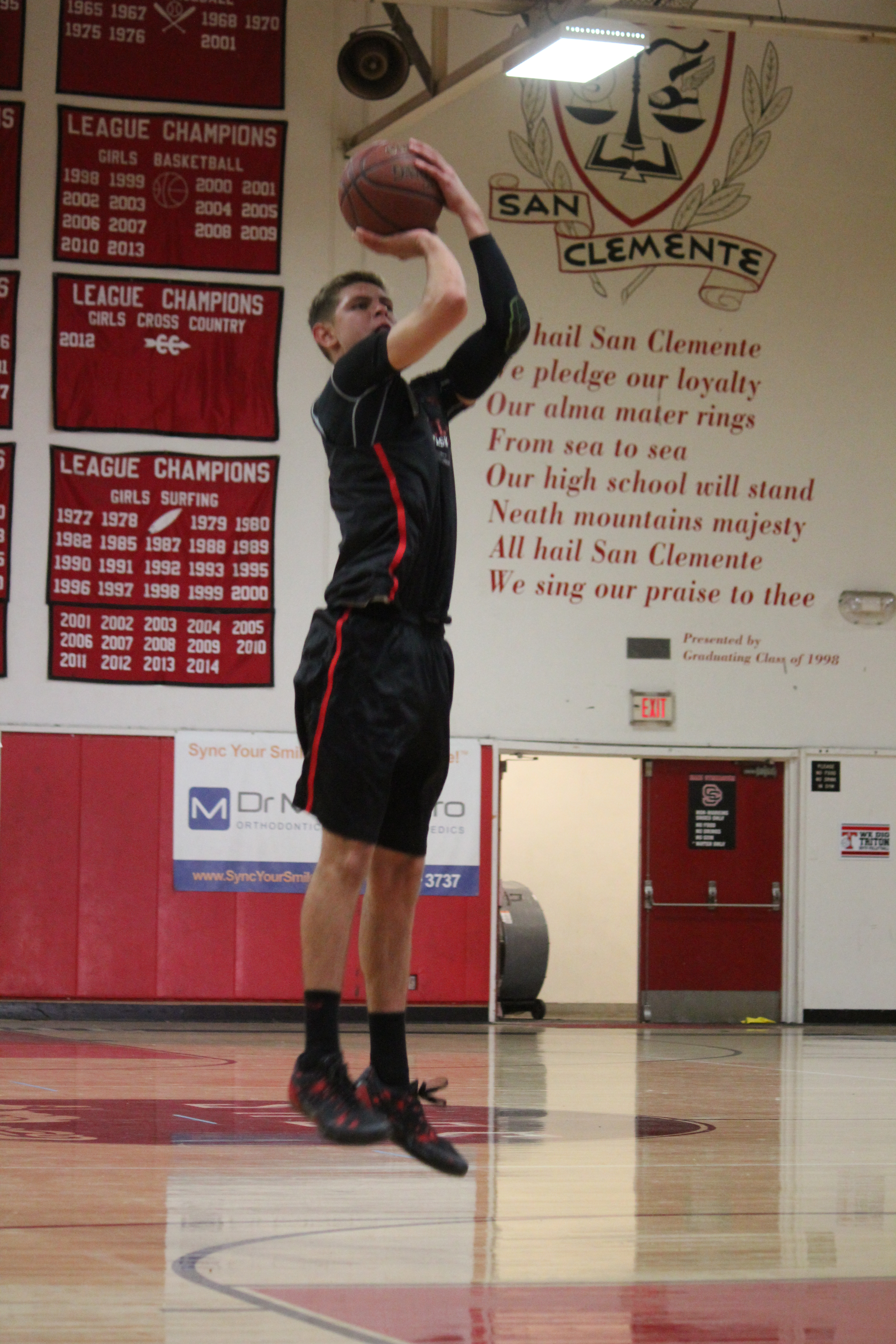 For in-game updates, news, scores and more for all of the San Clemente High School winter sports programs, follow us on Twitter @SouthOCsports.

The San Clemente boys basketball team opened their season with a huge 71-50 victory over Temecula Valley in the Diablo Inferno Tournament at Mission Viejo High School on Dec. 2.

The Tritons, playing without several impact players who were away with the football team, trounced the fourth-ranked team in the CIF-SS Division 1A polls.

San Clemente would go on to play against three other top-15 teams at the tournament, losing to Canyon, defeating Woodbridge and falling to Sonora, respectively.

The Tritons beat Woodbridge 74-46 on Dec. 4 as part of the tournament, but lost to the Warriors 63-56 in a nonleague game three days later.

The Tritons have been getting production from up and down their lineup, with the guards providing an early spark.

The South Coast League wrestling schedule is about as tough as it gets. Three teams in the five-member league are ranked inside the CIF-SS Coastal Division top-10 poll and on Dec. 9, the league showed its considerable depth.

Sixth-ranked San Clemente traveled to play rival Dana Hills on Dec. 9 and the Dolphins, the unranked team who finished third in league last year, pulled off a 36-30 upset victory.

It was the first time Dana Hills had defeated San Clemente since 2003.

Before their dual meet with the Dolphins, the Tritons notched a first-place finish at the Millikan Dual Meet Championships in Long Beach on Dec. 6. The meet featured several Triton victories over potential CIF-SS competition.

The Tritons went 7-1 overall at the event, including two key wins over South Hills and Arroyo, two teams the Tritons could possibly see in the postseason.

San Clemente was not alone at the top of the podium. Warren and Millikan also went 7-1 in the tournament, with Warren defeating Millikan in the earlier rounds. That put the two teams, including the Tritons, in a three-way tie for first place.

In a sign of things to come, the San Clemente and Tesoro girls basketball teams squared off against one another in a nonleague game on Dec. 5. The Titans, who enter the South Coast League this season, defeated the reigning league champion Tritons 59-41.

The two will face each other in their first league game on Jan. 8.

San Clemente will host Warren in a nonleague game on Dec. 16.

After losing 5-2 to Tesoro in their nonleague season opener on Dec. 2, the San Clemente girls soccer team lost to Beckman, 2-1, on the road on Dec. 9.

The Tritons will host Troy in a nonleague contest on Dec. 11.

On Dec. 4, in their first match of the season, the San Clemente girls water polo team easily defeated visiting Edison, 8-4, in a nonleague match.

The Tritons, who entered the season ranked No. 1 in CIF-SS Division 2, held a 4-1 lead at the half and scored four more goals in the finals two quarters to seal the win over the Chargers, who were on the bubble of the most recent CIF-SS Division 1 rankings.

San Clemente will travel to play Villa Park on Dec. 11.

Darnold, a USC commit, completed over 66 percent of his passes for 3,200 yards, 39 touchdowns and only eight interceptions. He also rushed for 775 yards and 13 touchdowns on 117 carries this season.

Whimpey, who transferred to San Clemente from Utah over the offseason, led the Tritons linebacking corps in 2014. The 6-foot-2-inch senior had a team-leading 159 tackles with five sacks and two interceptions.

“Very blessed to receive an offer from Boise St. tonight. Great start to the week!” Whimpey posted on his personal Twitter account on Dec. 1.

According to Ortiz, Whimpey is also being recruited by Fresno State, Utah, Brigham Young University, Washington, Hawaii and Utah State.

Third-ranked Paramount traveled to play the San Clemente boys soccer team Dec. 3 and came away with a 2-0 victory. But that didn’t slow San Clemente down for long.

The fourth-ranked Tritons bounced back from the season opening loss with consecutive wins over Tesoro and Santa Ana on Dec. 6.

San Clemente won both nonleague matches by way of shutout. They defeated the Titans 1-0 and blanked Santa Ana 2-0.

Senior forward Matias Ledesma scored points in each of the last two matches. He notched his first goal of the season against Tesoro and added an assist against Santa Ana.

The Tritons were scheduled to host Dana Hills in a nonleague match on Dec. 10. Results were not available at press time.