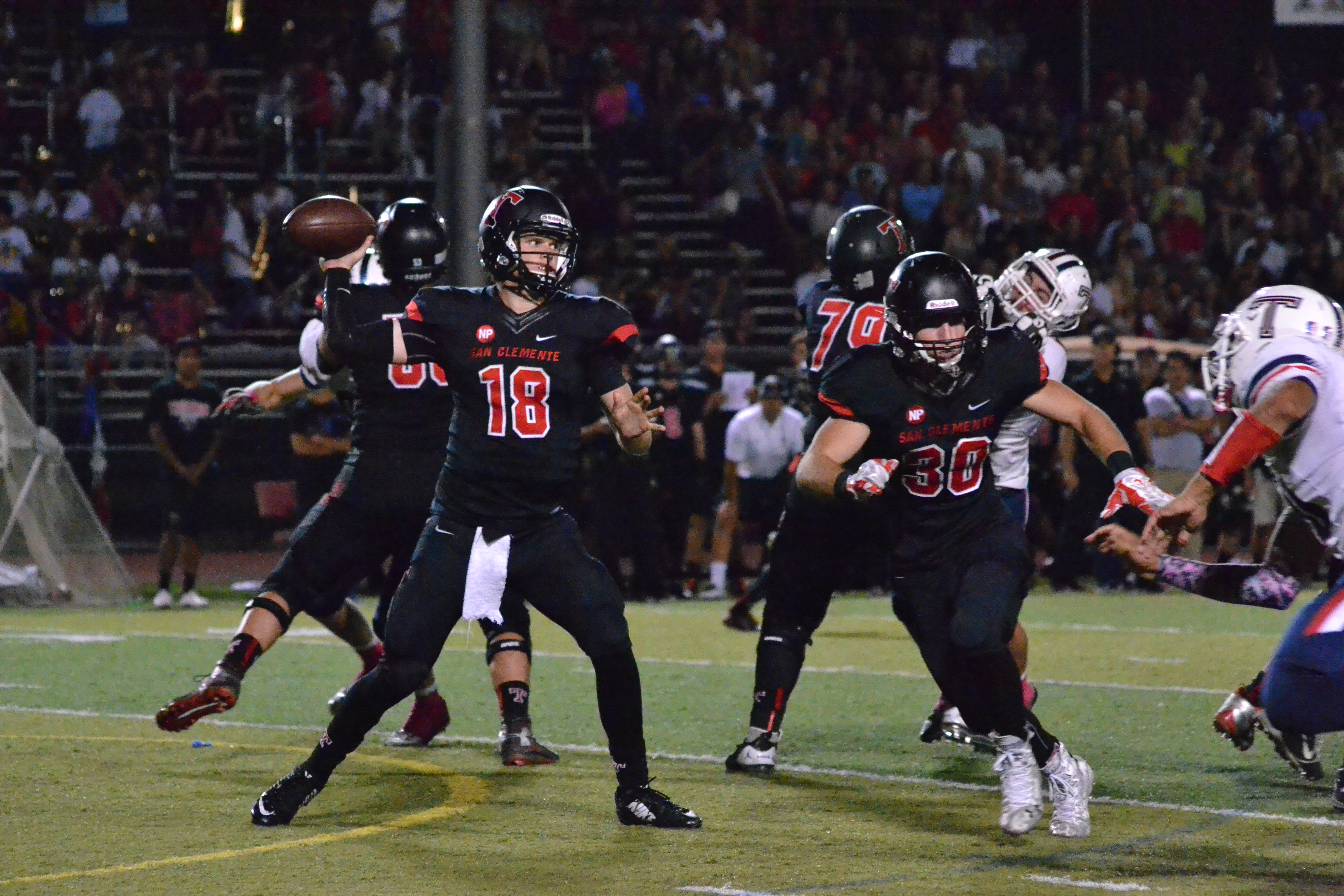 Not only did the win ensure an outright Sea View League title for the Tritons, it solidified their place near the top of the CIF-SS Southwest Division standings.

The Tritons (9-1, 4-0 league) entered the week ranked No. 2 behind Corona del Mar and will wait until Nov. 9 to see where they will be seeded come playoff time.

San Clemente scored the first points of the game against Aliso Niguel without its offense on the field. Sophomore Brandon Reaves returned a Wolverines punt 56 yards for a touchdown less than two minutes into the contest to give his team the early lead.

The Tritons offense would score two more times in the opening quarter, on a nine-yard touchdown pass from quarterback Sam Darnold to Vlad Dzhabiyev and a one-yard Dzhabiyev run, and got a touchdown out of its defense when Liam Eldridge intercepted a Nick Chapman pass and returned it 57 yards for a score.

Darnold broke off a 14-yard scoring run to open up the second half to take a commanding 35-8 lead.

Darnold was especially effective in the first half, completing 16 of 18 passes for 225 yards, two touchdowns and an interception. Darnold was taken out of the game in the third quarter and finished the night with 256 yards and three touchdowns, completing 18 of 20 passes.

Darnold’s last throw of the night was a five-yard touchdown to Dzhabiyev that capped a six-play scoring drive that gave the Tritons a 49-8 lead early in the third.

“We were just trying to get (Darnold) back on track. We kind of changed it up a little bit on both sides of the ball,” San Clemente head coach Jaime Ortiz said. “Offensively, it was just (trying) to be clean … (Darnold) is a pretty good player, might as well put the ball in his hands and let him do his thing.”

San Clemente will have to wait until Nov. 9 to see where the CIF-SS will seed them for the playoffs. The Tritons only loss of the season came to Tesoro, the No. 3 team in the West Valley Division, and they have quality wins over the Southwest Division’s No. 5 and No. 9 teams in Trabuco Hills and Capistrano Valley, respectively.

The Southwest Division playoff bracket is set to be released Nov. 9 at noon. Check back to www.sanclementetimes.com for a full re-cap of tonight’s game and updates on the playoff bracket.