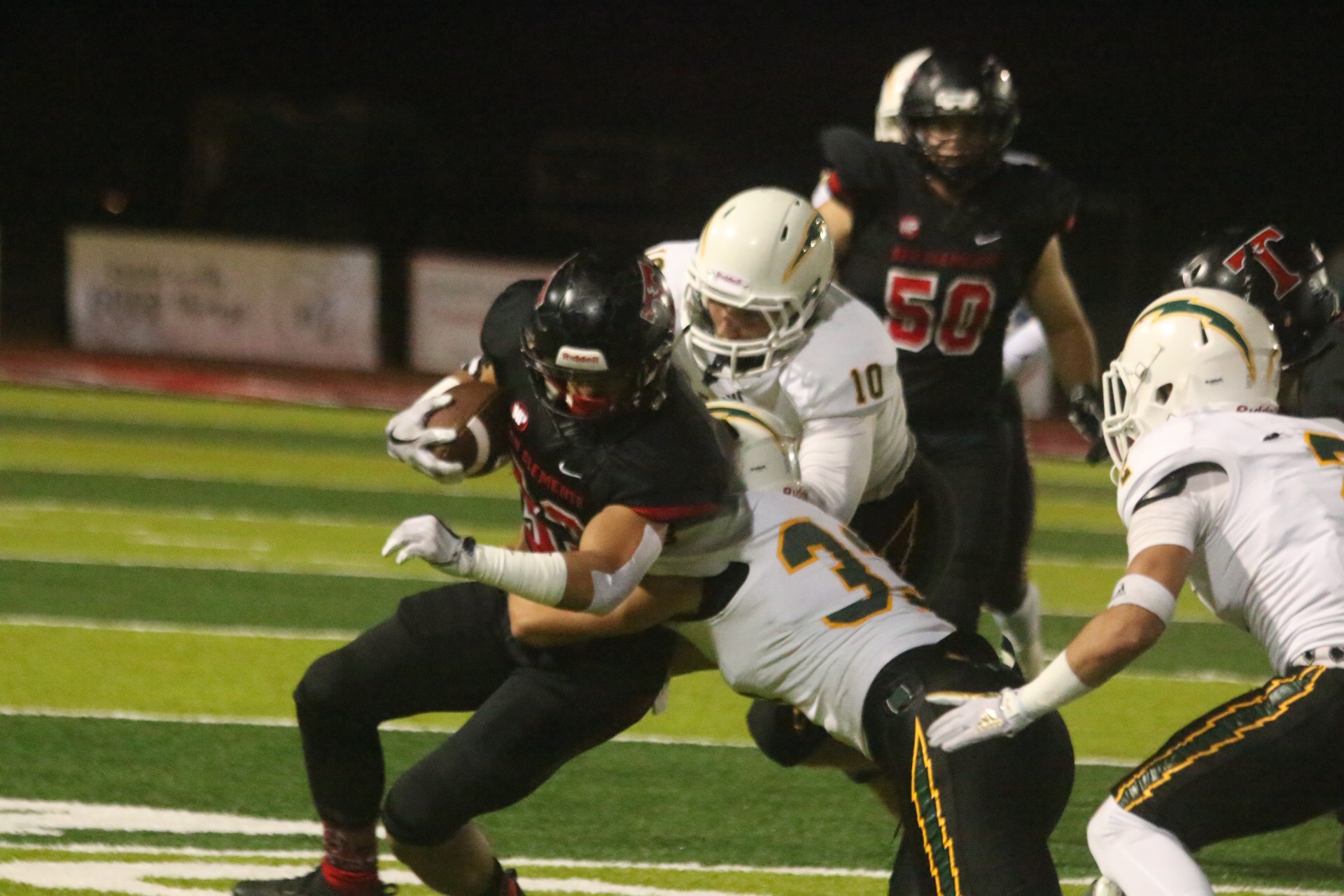 The San Clemente football team’s record-setting win streak was threatened on Friday night, but in the end it continued.

The Tritons survived a defensive battle with Edison at home and did enough to pull of a 23-20 nonleague victory.

The win was San Clemente’s 12th in a row, which is a program record. The current streak, which dates back to last season, moved past the old record of 10 consecutive wins recorded by the 1976 squad.

It was also the second time in the streak that the Tritons (6-0) defeated the Chargers (3-2). San Clemente beat Edison in last year’s CIF SoCal Regional Bowl Game.

With the game still hanging in the balance, San Clemente’s Bryce Wilson delivered a game-changing play by corralling a muffed Edison punt return with 5:47 remaining. Tristan Trager kicked a 34-yard field goal on the ensuing drive to put the game away and give San Clemente a 23-13 lead with just under three minutes to go.

But Edison would not go away easily. The Chargers responded with a six-play march downfield that ended with quarterback Griffin O’Connor connecting with Brandon Moradian for a score to cut into San Clemente’s lead, 23-20.

Edison got one final chance following that drive, and got the ball past midfield. But a game-ending sack of O’Connor ended the threat.

“I felt like we had some opportunities to take control of the game and we didn’t do that,” San Clemente coach Jaime Ortiz said. “Edison did a great job battling back and made the game a lot closer than i thought it would be in the second half.”

The Tritons took their first lead when quarterback Brendan Costello threaded a 10-yard pass to Chase Berman for a touchdown three minutes into the second. The drive was set up by a 42-yard Austin Whitsett kickoff return.

On the Chargers’ next play, the Triton defense forced a fumble and Aaron Frohner recovered to give the home team the ball deep in Chargers territory. Three plays later, Costello burst through the middle of the Edison defense for an 18-yard scoring run and San Clemente led 14-6.

The Triton defense forced an Edison three-and-out on the next series, highlighted by a Rob Farney sack on third down, which set San Clemente up with a short field. Tristan Trager kicked a 35-yard field goal to close out the half and stake San Clemente to a 17-6 advantage.

The Tritons defense held the Chargers to just 71 yards of offense in the first half.

Edison started the third quarter off with a convincing nine-play, 80-yard scoring drive. O’Connor ended it with a 25-yard touchdown strike that found David Atencio in the back of the end zone, cutting into the Tritons’ lead, 17-13.

“We shot ourselves in the foot but that was definitely a tough game and it was a good quality opponent. That was a grind to the end,” Costello said.

Whitsett gained earned every inch of his game-high 142 hard-fought yards. Costello completed 12 of 25 attempts for 121 yards to go with his passing and rushing touchdown. He also threw his first interception of the year, which was recorded by Isaiah Palmer.

O’Connor completed 18 of 36 passes for 210 yards and two touchdowns. Edison was held to just 28 yards rushing.