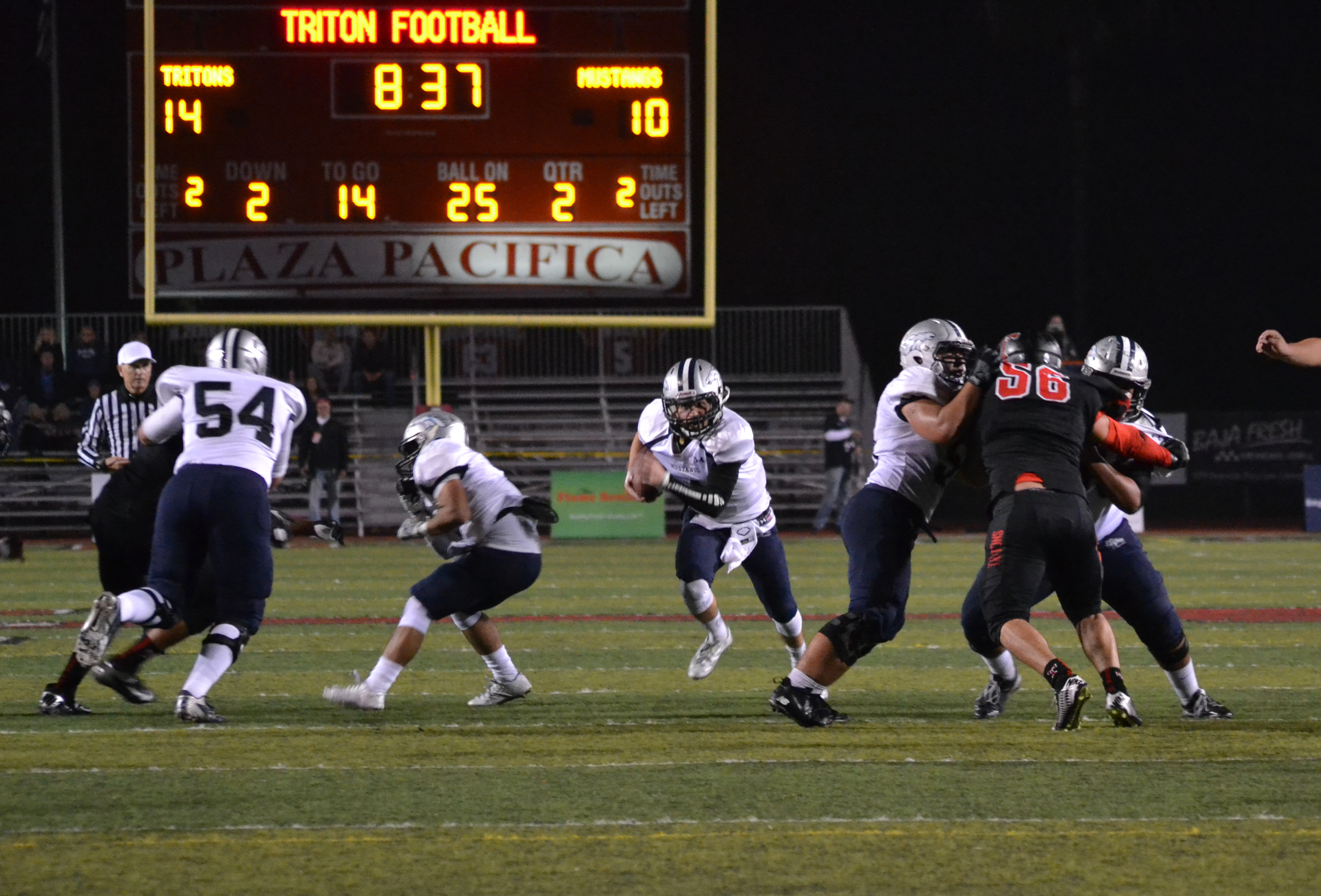 It looked for a moment that the San Clemente High School football team was going to claim a second come from behind playoff victory in as many weeks.

But after erasing what was a 10-point deficit to take a lead early in the fourth quarter, San Clemente saw their hopes of a CIF-SS Southwest Division Championship slip away, as visiting Trabuco Hills mounted a late-game rally, scoring 14 unanswered points in the span of two minutes to seal a 44-37 victory and the championship.

A five-yard touchdown pass from Mustangs quarterback Jimmy Jacobs to Nolan Thompson put the visitors up 37-34 with 7:51 to go. On San Clemente’s ensuing possession, quarterback Sam Darnold tried to pitch the ball to junior running back Vlad Dzhabiyev. It was a play the two had linked up for countless times this season but this time, the ball bounced off Dzhabiyev’s chest and into the air. Trabuco Hills linebacker Colin Schooler grabbed the ball mid-flight and dashed 27 yards the other way for a score and a decisive 14-point swing.

“It’s a tough play. (Darnold) is just trying to make a play happen and unfortunately the pitch mesh wasn’t there and (Schooler) made a great play on the ball and changed the momentum of the game,” San Clemente head coach Jaime Ortiz said.

The estimated 6,500 in attendance at Thalassa Stadium were treated to not only a re-match of the top two teams in the Sea View League, but  also a shootout contest that featured six lead changes.

Both quarterbacks were responsible for the offensive barrage early.

Darnold rushed for 130 yards and one touchdown in the first half, including a spectacular 71-yard scoring burst that came on fourth down on the Mustangs side of the field. Darnold also lobbed a 16-yard touchdown strike to Brandon Reaves that cut into the Mustangs’ lead 24-21.

Darnold finished the game completing 13 of 15 passes for 203 yards and one touchdown. He had 178 yards rushing with two scores on 17 carries.

Jacobs punched in a 24-yard scoring run midway through the second quarter, then connected on passes from 13 and 24 yards out, respectively, to receiver Jacob Breeland, the latter featuring a leaping catch in the end zone. Jacobs ended the night with 138 passing yards and three touchdowns.

San Clemente came roaring out of the gate in the second half, scoring in less than two minutes on an 11-yard Dzhabiyev touchdown run. The San Clemente defense held the Mustangs to limited yards in the third quarter while the offense tacked on one more score, an 11-yard Darnold keeper that gave San Clemente a 34-30 lead.

While they came up ultimately short of their goal of a CIF-SS Championship, the Tritons accomplished a remarkable turnaround in 2014.

When last year ended, the team was staring at a 2-8 overall record, including an 0-4 run through league play. Immediately, the thought of “Operation Redemption” was born.

The coaching staff and players had settled on the term as their mantra and rallying cry for the new season. The Tritons wanted to put themselves back on the Orange County football landscape in a big way.

Signs, shirts, even a popular Twitter hashtag, #operationredemption, kept the saying fresh on the minds of those in town. The team bought in and, although the last game of the year was a loss, accomplished quite a bit.

They ended the year with a 12-2 overall record, captured the program’s first league championship since 1999 and appeared in a CIF-SS Championship game for the first time since 2011.

“To finish 12-2, that’s awesome. That’s something to build on. The senior class did a great job building up this program back where it needs to belong,” Ortiz said. “To be honest, we’re just getting started. We return a lot of guys next year and this is a young football team. I think this senior leadership has shown these kids what winning is all about and I expect great things from our kids next year.”