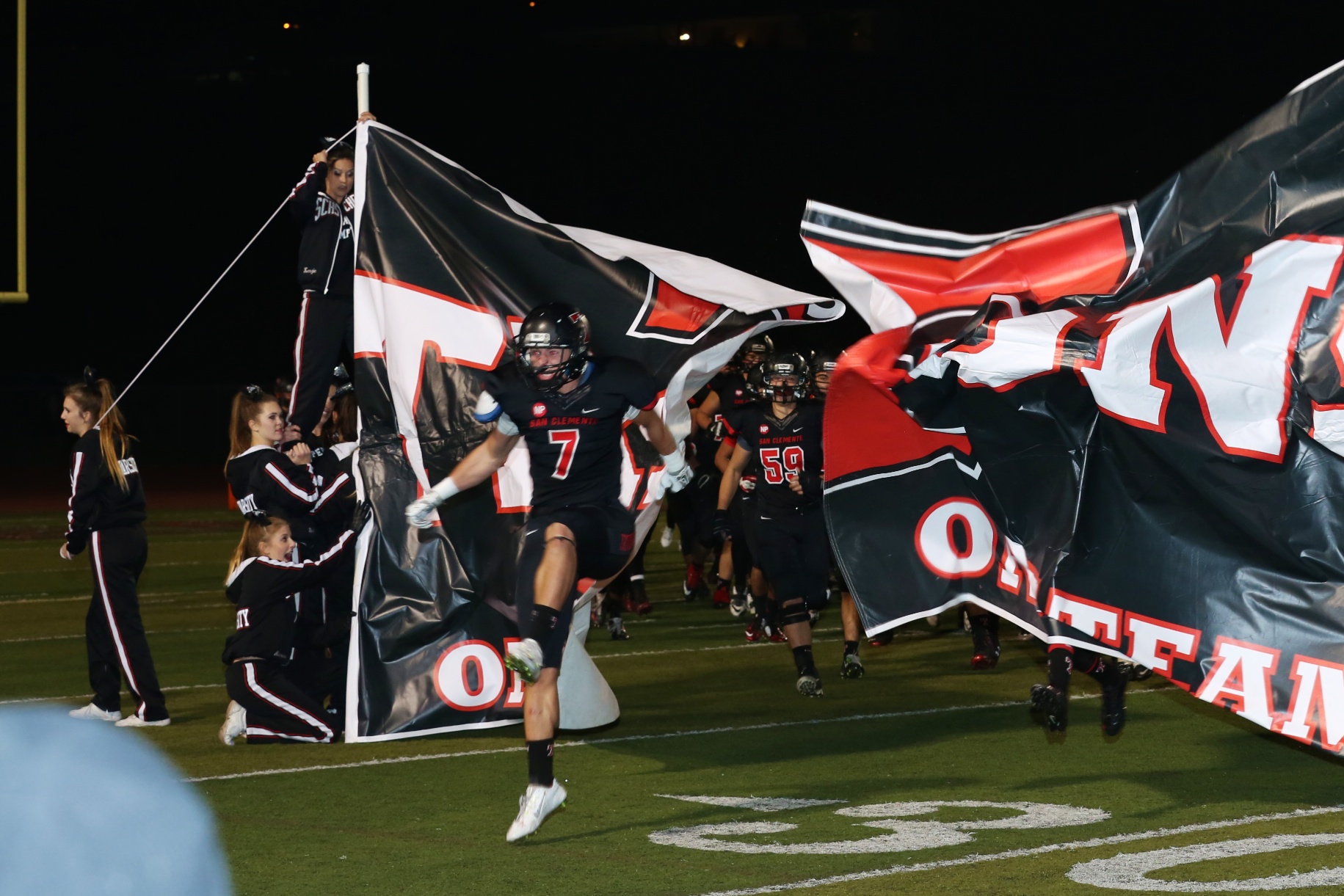 There is a cliché saying in football that describes the sport as being “a game of inches.” When watching a game that pits 11 players on one side of the ball trying to move down field as far they can against 11 other players determined to halt or slow their progress, it’s easy to see how true that saying rings sometimes—especially if the game involves two evenly matched opponents.

When the San Clemente and Trabuco Hills High School football teams played against each other back on Oct. 30, that cliché became reality.

The game was decided by mere inches, as Trabuco Hills attempted to tie the game with the clock running out with the ball down at the Tritons five-yard line. A timely, textbook tackle from San Clemente’s Andrew Frohner stuffed the Mustangs top receiver, Jacob Breeland, just inches short of the goal line on fourth down, allowing the Tritons to hold on for a 42-35 victory.

That win ensured San Clemente would grab at least a share of the Sea View League title.

On Dec. 5, the Tritons and Mustangs will play each other yet again only this time, the stakes will be much, much higher.

Trabuco Hills will travel to play San Clemente at Thalassa Stadium for the CIF-SS Southwest Division Championship at 7:30 p.m. San Clemente is now one step closer to making good on their season rallying cry, which they dubbed “Operation Redemption.”

It will be the second time in as many weeks that San Clemente will have faced a Sea View League opponent in a playoff game.

The Tritons found themselves in a game similar to their Oct. 30 duel with the Mustangs last week against visiting Capistrano Valley in the semifinals. The Cougars, who entered the postseason as a wild card team and played the role of Cinderella squad, forced San Clemente to make uncharacteristic errors in the first half of play.

The Tritons turned the ball over three times in the first half, one by way of interception and two by lost fumbles. After 24 minutes, Capo Valley held a 21-7 lead. It was the first time the Tritons had trailed at the half since their Oct. 2 nonleague game against Tesoro.

But San Clemente was able to rally around their defense and get game-changing plays on offense to flip the script in the second half and come away with a 28-27 overtime victory.

The Tritons defense held the Cougars to zero points in the second half, led by a re-charged effort from their defensive line and the play of senior middle linebacker Riley Whimpey, who recorded 16 total tackles in the game.

After struggling in the first half, San Clemente’s offense got it going in the fourth quarter. Senior quarterback Sam Darnold connected on a touchdown pass to Cole Harlow and rammed home a one-yard touchdown run to tie the game up, 21-21, with just seconds left on the clock.

In overtime, the Cougars scored first. When their point-after touchdown kick attempt went into the air, the “game of inches” mantra reared its head and the kick went just wide.

“That was a heavyweight fight. Two sluggers going at it back and forth … We dodged a major bullet there,” San Clemente head coach Jaime Ortiz said after the game. “I thought our kids fought at the end and persevered. They never quit and that’s a sign of a good team.”

The Tritons attention now turns to Trabuco Hills, who they’ve battled in the trenches with before.

If the small sample of what we saw between these two teams earlier this season, and last weeks’ game against Capo Valley, has taught us anything, it is that those precious inches out on the field could be the deciding factor in claiming a CIF-SS title on Friday.