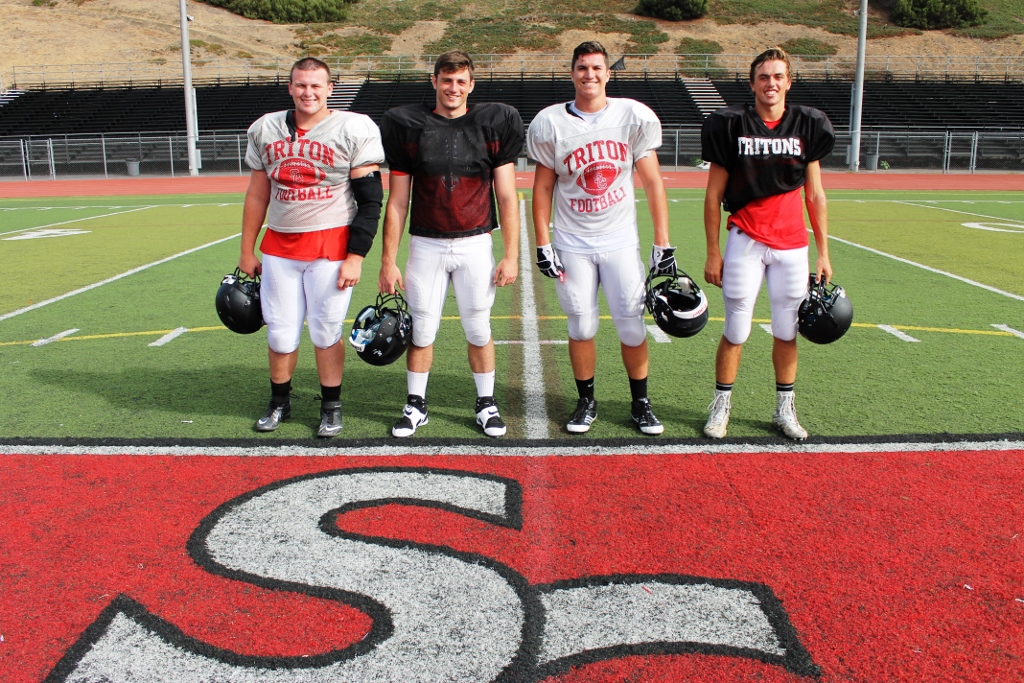 Tritons, Old and New, Head into the New Season

Last season the San Clemente football team was built around returning seniors who played both sides of the ball. Mainstays like Sean Harlow, Christian Bailey and Landon Cook, all two-way players, were the catalysts. They were considered a relatively young team when taking varsity experience into account.

Well, this year the Tritons can be considered even younger.

A number of sophomore, junior and senior players will don the red and black for the first time as varsity players when the Tritons take to the field for their season opener against Long Beach Jordan on August 30.

Head coach Jaime Ortiz and his staff have adopted a one-platoon style approach this year, which means there will be a limited number of players who play both ways. Instead, players are focusing solely on either offense or defense. The coaching staff feels it is a better fit for the personnel that make up the 2013 roster.

“In order for us to maximize our talent with what we have, we decided we are going to have one-way guys. It gives guys in their first year starting an opportunity just to focus on one side of the ball,” Ortiz said. “In the past we’ve been on both sides and it’s a lot of information, a lot of reps and sometimes you don’t get the most out of each individual athlete.”

One-platoon systems also limit the wear and tear on players, which can lead to injury. The Tritons had several key injuries last year and with this approach, Ortiz hopes they will stay relatively healthy.

As of August 21, three sophomores were slated to start on offense although one of them, left guard Dante Harrington, started last year as a freshman. On defense the Tritons are more experienced and field a senior-heavy group with juniors sprinkled in amongst the ranks. But several of those seniors have little varsity experience.

All of the new faces have led to what has become the main storyline of the Tritons camp—an opportunity for competition. The young guns have been fighting for spots over the offseason and even with little experience, they have been impressing the Tritons veterans.

“It’s more energy. All those kids want to prove themselves and go out there and show they can play with all the big boys,” senior free safety Collin Zines, a two-year starter, said.

“They are kind of learning as we go. Guys are starting to fit into their roles … they are fitting in pretty well. We have some studs on this team,” senior strong safety Peyton Garrett added.

One young player who has steamrolled his way into a starting job is sophomore running back Vlad Dzhabiyev, who one year ago was playing for the Tritons junior varsity ranks as a freshman. Dzhabiyev is the smallest player on the offense but has proven to be a hardnosed, speedy tailback who picks up yards. Ortiz also likes his dual-threat ability and says he is extremely adept at catching the ball out of the backfield.

Dzhabiyev has hit the ground running since he joined the varsity squad and has had to adapt to the quickness and physicality of the game. He’s also figuring out an entirely new playbook.

“Last year I was in a totally different place so I’ve had to learn the new plays all over again and get back into the feel of competing,” Dzhabiyev said.

The young players have been fun to watch, but it is the group of returning starters and experienced varsity players that the Tritons will lean on as they head into the new season.

One of the more veteran groups of the team comes in the form of the offensive line, where center Tyler Maxwell, left tackle Adam Solano and right tackle Tyler Abercrombie return for their senior campaigns. All three saw considerable playing time as juniors and will help set the tempo for the offense.

Lining up next to the line will be three-year varsity tight end Jason Wright, who Ortiz pegs as a candidate for a breakout season. Wright is a big target, standing at 6-feet-2-inches, and will double as an outside linebacker on defense.

The responsibility of making the offense click will be the Tritons quarterbacks—and they have two good ones.

Junior Sam Darnold will open the season as the starter. Fans will remember Darnold’s role in the Tritons’ signature 29-21 come from behind victory over Tesoro last year. Darnold burned the Titans to the tune of 241 passing yards and two passing touchdowns in his first career varsity start. He also rushed for 80 yards and punched one into the end zone.

Behind Darnold on the depth chart is senior Loren Applegate, who started two games last year. Ortiz describes Applegate as a pocket quarterback who can make the throws downfield.

The defense will consist of solid seniors like Zines and Garrett, along with middle linebacker Grant Lyttle. Lyttle was a role player last year, filling in when needed, but has a chance to lead the defense in 2013 at one of the most crucial spots in the middle of the field.

Holding the defense together is senior defensive end Kelsey Benoit, who led the team with nine sacks last season.

The mix of young talent and returning veterans has made for an optimistic vibe around Tritons camp. Mission Viejo is still the team to beat in the South Coast League but a number of Tritons believe that outside of the Diablos, the chance for a playoff spot is up for grabs. El Toro is without their star powered offense and Tesoro graduated dozens of seniors, which has the Tritons thinking big.

“I’m really looking forward to this season … I think our defense is going to be much better than what people think. Our offense is going to be up-tempo and really fast, I don’t think people will see that coming,” Darnold said. “Right now I see ourselves winning a league championship no matter what. Mission Viejo is going to be hard. Trabuco has a lot of returners…but nothing is going to be easy.”