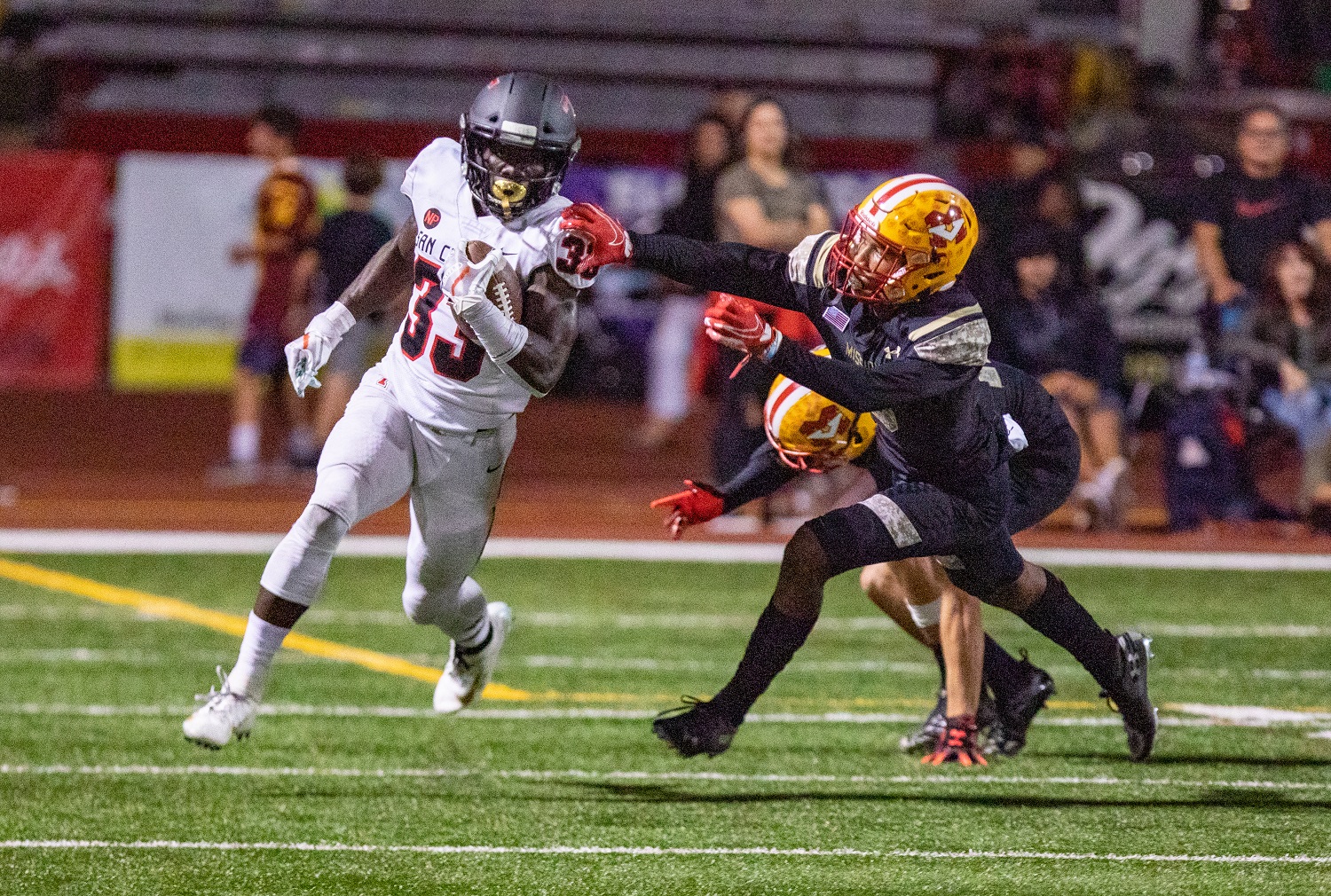 Two for the Road: SCHS Football Opens Playoffs at Valencia, Despite No. 2 Seed

The San Clemente football team was rewarded for its wait.

After a bye week to end the regular season, the Tritons (8-2) earned the No. 2 seed in Division 2 when the CIF-SS playoff brackets were released on Sunday, Nov. 3.

However, the seeding came with a bit of a catch, as San Clemente will not open in the friendly confines of Thalassa Stadium. Instead, the Tritons will play at Valencia High of Valencia on Friday, Nov. 8 at 7 p.m.

“A little bit (disappointed), but I knew the bracket rules,” San Clemente coach Jaime Ortiz said. “We had the opportunity to play some at-large teams, but we get Valencia.”

As a league champion, Valencia (7-3) earned the right of a first-round home game, by CIF-SS rules. San Clemente finished as the runner-up in the South Coast League to Mission Viejo.

“It’ll be a good test,” Ortiz said. “When I first got here in the 2000s, Hart and Canyon (of Canyon Country), they were the top dogs in that area. Valencia has taken that area.”

The Vikings won the Foothill League for the 11th consecutive year.

Valencia won its seven games by an average of nearly 28 points per game, including back-to-back 50-point wins to open the season and two shutouts in league play: 34-0 over Golden Valley of Santa Clarita and 45-0 over West Ranch of Valencia.

Valencia got its business done through the air this season.

Senior quarterback Ryan Morrison completed 54% of his passes for 2,142 yards and 20 touchdowns, with six interceptions. Most of Morrison’s passes have been caught by the tandem of senior Mitchell Torres (42 receptions for 681 yards and five TDs) and sophomore Zamondre Merriweather (30 receptions for 512 yards and five TDs). Seniors Jayden Lawrence and Jake Santos and sophomore Brandon Tompkins have also been major players in the passing game.

Santos is the leading rusher and finisher for the Vikings with 102 carries for 501 yards and 10 TDs.

This first-round matchup could be decided by each group’s best unit taking on the other, as San Clemente’s formidable defense will be tested by that high-powered Vikings offense.

San Clemente held opponents to 186 yards passing per game. Morrison and the Vikings threw for 214 yards per game.

With Valencia on the playoff schedule, the San Clemente faithful may have memories of 2016 dancing in their heads. On the Tritons’ run to their first CIF-SS and state championships, San Clemente hosted Valencia in the CIF-SS semifinals and advanced with a 41-35 win.

However, San Clemente knows that, good omens or not, any run to a CIF-SS title this season will require running a gauntlet.

“From my perspective,” Ortiz said, “that Division 2 bracket is more competitive than the Division 1 bracket with those two monsters (national top-two Mater Dei and St. John Bosco). It’s a tough bracket. Some very good football teams from the top down. (We’re a) No. 2 seed, and we’re playing a league champion.”