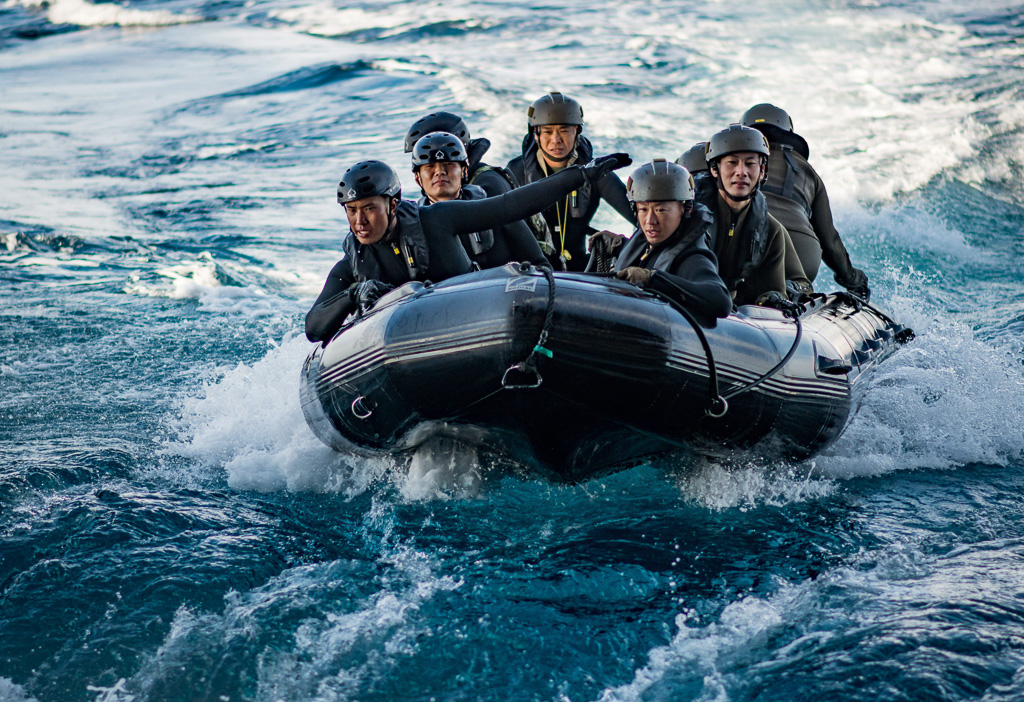 Rough waves crashed along the beaches near San Clemente as soldiers in amphibious vehicles stealthily made their way from being submerged in the Pacific Ocean to the shore.

It was more than halfway through the Iron Fist training exercises of 2019 on Monday, Feb. 4, when the 1st Marine Division and the Japan Ground Self-Defense Force (JGSDF) initiated their amphibious landing exercises, intended to be deployed for quick combat operations and to improve aspects of its combined forces.

“Iron Fist allows us to strengthen our abilities as an alliance, ensuring rapid deployment in case of crises or in response to the threat of potential adversaries,” according to a press release for the exercises.
The four-week process started with staff exercises and included combined live-fire training.

On Monday, Lt. Gen. Joseph Osterman, the commanding general of the I Marine Expeditionary Force, said the importance of operations such as Iron Fist cannot be understated. He was accompanied during a press conference by Japan’s Lt. Gen. Hirokazu Fujita, the chief of staff of the ground component command.

“We have capable and multinational maritime forces that help ensure stability and prosperity around the world, and it is multilateral exercises like Iron Fist that help us to operate together in a maritime environment,” Osterman said.

Iron Fist is now part of training that supports the Amphibious Rapid Deployment Brigade (ARDB), which was established in March 2018. According to the U.S. Navy, it is the Japanese government’s “concept to deal with various situations on islands.” It combines ground forces, aviation support and logistics into a unit that can react to operations including self-defense and humanitarian assistance/disaster relief.

“Due to the challenging security environment, the JGSDF has undergone its greatest reform since its inception to protect people’s lives, security and peace from various threats,” Fujita said. “The ARDB, which was newly established, is the spearhead…to defend remote islands and respond to any kind of contingency.”

When asked by a Japanese reporter about the success of the ARDB since its inception, Osterman said he’s been impressed by what he’s seen in the 10 months since it began.

“Our perception of working with the ARDB has been nothing short of a very professional and very capable unit,” Osterman said. “My view is that they are very proficient in their skills and what they do. They have worked very hard along with our U.S. Marines.”
Because there are constant replacements and rotations of Marine staff throughout the military branch, Osterman said it’s important to ensure that the soldiers they train are individually scrutinized on their performances, which he said have been excellent—particularly in this amphibious landing portion of Iron Fist.

He said with the ARDB bringing its own vehicles this time, it’s been important to see which vehicles fit on which ships and to improve communication between carriers.

“This is particularly important, because the most difficult operations you can do are amphibious landings,” Osterman said. “That objective has been reached with this exercise and brought it to a pinnacle in working together.”

Check out images of the Iron Fist 2019 on the U.S. Marines’ social media sites on Facebook and Instagram to see more of what’s been going on at Camp Pendleton for the past three weeks.