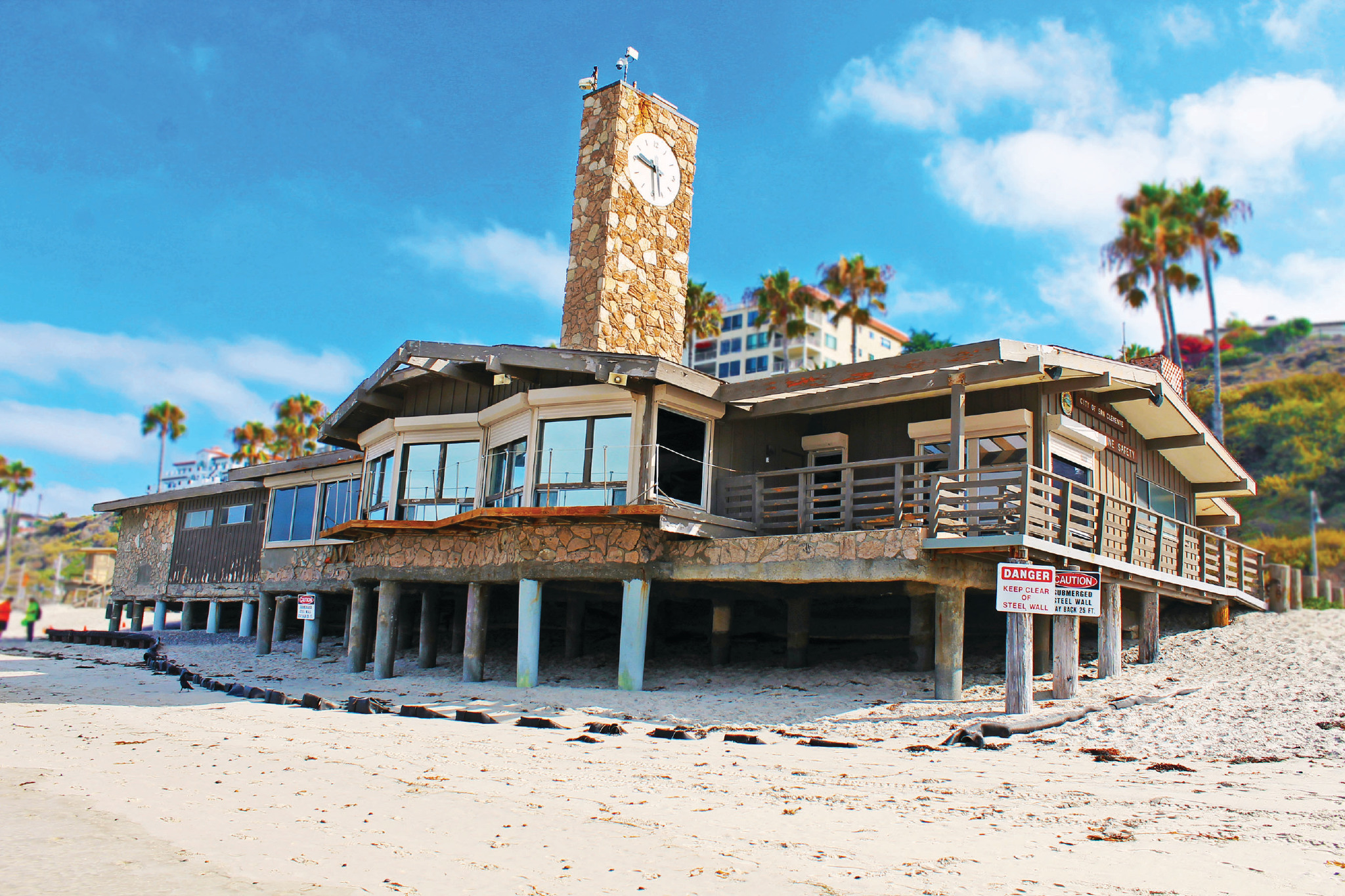 San Clemente City Council voted, 3-1, at the council meeting on Aug. 20 to approve a construction contract and plans for bulkhead repairs and accessibility improvements to the building that lodges the city’s main lifeguard operations.

“It sounds like an expensive project,” said Bill Humphreys, Marine Safety Chief. “But I think it’s money well spent in terms of all the benefits that the public receives from having a fully functional lifeguard department right here (on the beach) that has opportunities for backup and response. We have a great record. Part of it is attributed to this building and the functions that it provides.”

Ilkhanipour said that in large surf conditions, the existing steel sheet pile wall, which protects the building from waves, is overtopped by the tide and waves run directly into the building.

“The building and sheet piles are in need of rehabilitation to extend the life of the building for approximately another 10 years before additional rehabilitation or replacement may be needed,” Ilkhanipour said in the report.

The city estimates that the Marine Safety Headquarters serves roughly two million visitors to San Clemente beaches per year. Previous restoration work to the building was done in 1986 and 2003.

San Clemente hired a consultant—TranSystems—in 2016 to evaluate the condition of the building and determine improvements needed to extend the life of the structure for another 10 years.

Laura Ferguson was the only councilmember to vote no on the contract award for the Marine Safety building improvements.

She said, “I believe to be fiscally prudent, it is better to wait until we get the proper funds in place to do something long-lasting that our community can be proud of, rather than put more Band-Aids on this aging public asset.”

Ferguson said San Clemente City Council has been talking about replacing the building for close to two decades. She asked city staff if the city has set aside any money for potential replacement of the building, to which their reply was no.

“It was unfortunate to learn that no funds have been set aside annually in a capital fund to build a new marine safety center. I would like to see our city start doing that,” Ferguson said.

At the meeting, City Manager James Makshanoff said the city has discussed moving the building elsewhere.

Makshanoff indicated that the city is trying to save the Marine Safety building’s location for as long as possible. “There’s an element in town that thinks that building needs to be saved at all costs—I’ve heard that in the past with prior councils and that we need to stay in that iconic marine safety building,” he said. Makshanoff added, “I don’t think you’ll get a disagreement from staff that $2 million is a lot of money and that it’s excessive. I’m not sure that we really agree with it, but it’s up to the council to decide: do you want keep it there or direct us to start a process to find another site for it?”

“In the meantime, I have a building that is at pretty serious risk of failing sooner than later. It’s got a major structural support beam that is nearing the end of its life, and it has no protection because the sea wall is basically not functional,” Bonigut said to the city council. “If we do nothing, it could be one major storm that really puts that building in jeopardy, or we could go several years . . . I just can’t tell you.”

Ken Nielsen, who served 14 years on the city’s Coastal Advisory Committee and is familiar with the issues said the debate whether to keep the building or do away with it is nothing new.

He thinks the building is in bad shape and the city should end it now and come up with a new plan.

“That’s a ton of money on a piece of junk building that’s going to go away,” Nielsen said.

Councilmember Chris Hamm said it would be much better if the city didn’t have to spend the $2 million, but, “At the end of the day, we have to have first responders that are available to respond instantly and with trains coming through daily, that’s just not possible from the east side; so if we back off this building, it is going to go away,” Hamm said.

Hamm emphasized the council needs to take action before the winter swells approach.

Councilmember Kathy Ward said she was for the repairs. “This is a public safety issue,” she said.

Acting Mayor Dan Bane said, “Every single person from Marine Safety we talked to stressed how important that location was to them. I think it would be a waste for us to let that building fall down into the water—to not do anything. I am going to have to begrudgingly support it.”

The council voted, 3-1, to approve the building’s repairs.

A Rationale for the Project

“San Clemente is very fortunate,” said Marine Safety Chief Bill Humphreys, sitting in his 1960s wood-paneled office overlooking the Pacific Ocean. “We have two features that are real critical in a lifeguard operation. One is our Tower Zero on the pier, which gives us observational ability to see the water 365 days out of the year. The second is having a lifeguard headquarters on the beach, where it houses not only emergency equipment, but backup personnel—which is extremely important.”

Humphreys took over as Marine Safety Chief in 2001 and is stationed at the Marine Safety Headquarters building, which sits in the sand north of the pier. He is joined by three other employees: a dispatcher, watch commander and their secretary.

The building is home base for the 50 to 55 lifeguards who watch over San Clemente beaches.

While a majority of the lifeguards report directly to their tower, they are in and out of the building for training purposes during the spring and summer.

The rationale for the project, Humphreys said, is based on the importance of the building, which at its current state is vulnerable to being lost in a major storm.

Hidden assets, he said, are the dispatch center and the administrative offices that are right on the beach.

“Administrators and the dispatchers serve as backup for the emergency personnel,” said Humphreys.

Preparing for the Unpredictable

In the short term, Humphreys said if this repair project is completed, the Marine Safety building should be able to withstand another 10 years.

“That all changes if there’s a sand replenishment project,” he said, “which would expand the beach, and could give us many, many more years. Even though it’s a very old building, it’s still very functional.”

Humphreys added, “Cost-wise, it would be wonderful if the building lasted another 30, 40, 50 years, but at the same time, we have to make preparations for potential sea-level rise, further erosion, the building being undermined and having to be replaced. Ideally, we would relocate further away from the shore, but still be west of the railroad tracks, so that we could respond. Unfortunately, we have train tracks that limit emergency access to the beach,” he said.

The chief discussed other potential locations for Marine Safety such as moving the building to the parking lot behind its current location and reducing its size, or expanding offices at Tower Zero on the pier.

Humphreys said he’s visited many other lifeguard departments and most have a headquarters on the beach, but not all have the functionality that San Clemente currently has.

“The best-case, long-term scenario,” he said, “is we have a sand replenishment project, this building (is) refurbished, and it’s here for another 50 years.”