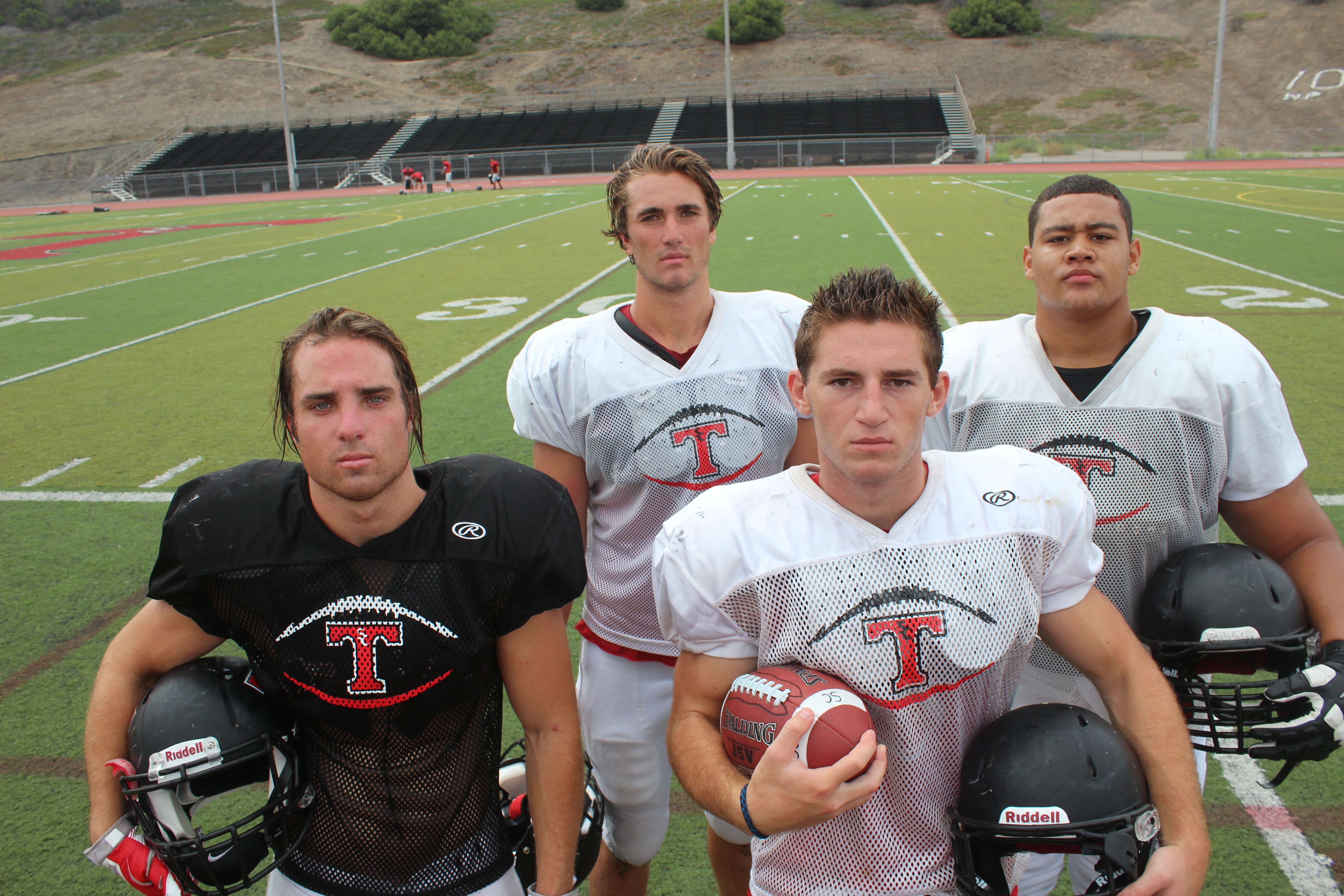 After a 12-2 season, the San Clemente High School football team readies for another playoff push

The San Clemente High School football team’s focus last year was putting the program back on the map of the prep sports landscape after winning only two games in 2013. They accomplished that and then some.

The Tritons barnstormed their way to a Sea View League title, won 12 games and appeared in the CIF-SS Southwest Division Championship game in 2014. It was in the championship game, however, where they hit a snag. San Clemente was bested by league rival Trabuco Hills in a back-and-forth bout that came down to the final minutes. The Mustangs, who the Tritons defeated earlier in the season for the league title, ended up with CIF rings.

Now that they have returned the program to contender status, the veteran-heavy Triton program is focusing on taking things one step further after knowing what it feels like to get so close to the top.

“We know we should have finished that (championship) game. Our whole mindset (this year) is just finishing,” senior offensive lineman Donté Harrington said. “In the championship game it came down to the last six minutes … It’s still a little bit of a sore spot to talk about. But there’s definitely something going on this season where we know that we put San Clemente back on the map with what we did last year, and it’s time to finish it.”

San Clemente enters the season with 12 returning starters and five players who have Division I offers from collegiate programs.

Seven players return to the high-powered offense that scored an average of 45 points per game in 2014. A large part of that production was due to graduated senior quarterback Sam Darnold, who had a record-breaking season and is now playing at USC. But almost all of the pieces that surrounded Darnold are back.

In the championship game it came down to the last six minutes … It’s still a little bit of a sore spot to talk about. But there’s definitely something going on this season where we know that we put San Clemente back on the map with what we did last year, and it’s time to finish it.

The running back tandem of senior Vlad Dzhabiyev and junior Brandon Reaves lived up to their “Thunder and Lightning” nicknames given to them by the coaching staff last season. Dzhabiyev earned Sea View League offensive MVP honors after rushing for 1,149 yards and 13 touchdowns. He also caught six passes and scored six times as a receiver. Dzhabiyev will be a focal point on offense but will also play linebacker on defense.

Reaves rushed for 645 yards and 13 touchdowns and added seven more scores as a receiver. He also had several big plays returning kicks on special teams.

Dzhabiyev remains the punishing, downhill runner in the duo, and Reaves has spent the offseason adding 10 pounds to his frame while maintaining his dynamic speed, according to head coach Jaime Ortiz.

Fotheringham, a Utah commit who caught eight touchdown passes last year, presents even more options for the Tritons offense to run through.

The quarterback who will replace Darnold has yet to be named. Juniors Jack Sears, junior Sander Lush and sophomore Doug Jackson are all competing for the starting job, but it is Sears who has the slight edge so far, according to Ortiz. Sears, who Ortiz described as athletic and mobile, was the team’s backup last year and picked up an offer from Utah during the offseason.

Five starters return to the defense, including seniors Kevin Kling (cornerback), Andrew Frohner (safety) and Tanner Wright. The trio was a part of a Tritons secondary that recorded 15 interceptions last season. Wright will float in and out of the outside linebacker and safety positions.

Replacing graduated senior linebacker Riley Whimpey’s school-record 172 total tackles in 2014 will not be easy, and Ortiz and his staff will be rotating players like Wright, Dzhabiyev, juniors Ryan Russell and Riley Croft in at linebacker.

As a whole, the Tritons defense is not as big as it was last season, which should put a different skill set in the spotlight.

“We’re really focusing on our speed and ability to get to the ball fast. We don’t have the biggest kids but we do have the skill and speed to be good,” Wright said.

Defensive end Liam Buhl and defensive tackle Nate Atkins will be mainstays at their positions. Ortiz said the defensive line will have a lot of personnel changes and movement in the early going.

San Clemente has returned as a contender. A lot of the players on the roster now know what it feels like to be on the biggest of prep sports stages. But Ortiz is advising his players to have a short-term memory because staying on the map is never a guarantee.