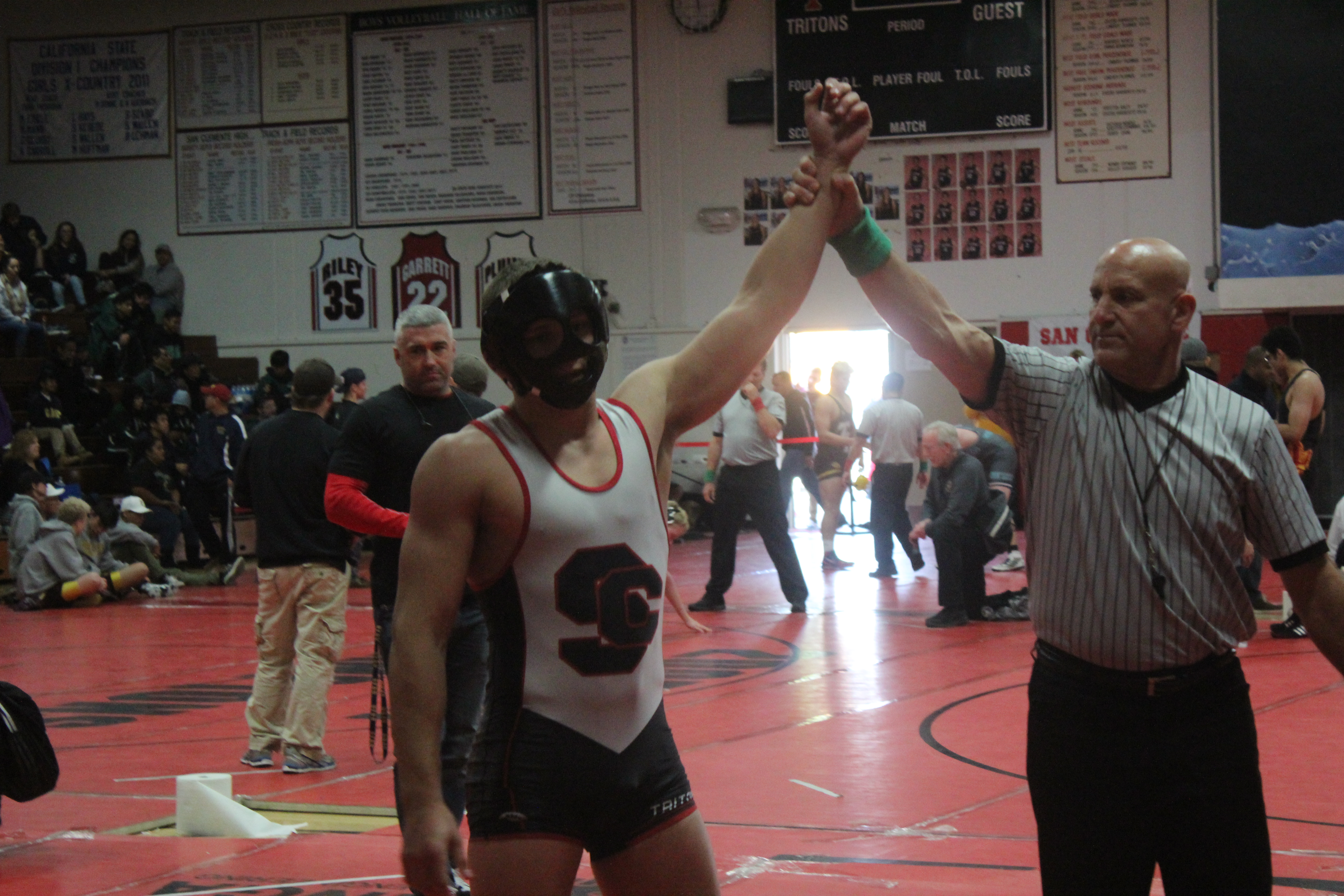 As the start of his first-round match drew near, Kyle Marshall looked calmer than his opposition.

Standing in the corner of the San Clemente High School gym on Jan. 21, Marshall and the other 195-pound wrestlers competing in the 32-team SC Rotary Tournament were in a group waiting for their chance on the mats. Many wrestlers jumped up and down or crouched, trying anything to stay loose and let out nervous energy.

Marshall stood there, calm as could be, shifting his weight back and forth from his left to his right side, occasionally shaking an arm or a leg.

Before he squared off against his first opponent of the day, Marshall put on a protective black face mask. He broke his nose two years ago playing basketball, but he still wears it for protection. It’s not by design, but it makes him look more intimidating.

As soon as the referee allowed it, Marshall was on the attack. He pressed the issue early and often in the match, something he’s been working on this season while going against lesser opponents. His speed, strength and athleticism were on full display as he took his opponent down in a variety of ways and held control on the ground. He cruised to a 17-2 victory and into the second round.

Marshall continued to dominate the rest of the day. He won every one of his matches by pin fall until he reached the finals, where he won by an eight-point margin.

The individual tournament win was Marshall’s fifth this season, and he owns an impressive 39-3 overall record, 25 of which came by way of a pin. He was named the upper-weight MVP of the 63-team La Costa Canyon Invitational earlier this year and was the champion at the 81-team Central Coast Classic.

Marshall, the fourth-ranked wrestler in the 195-pound weight class in California, is on the path to becoming one of the best Triton wrestlers ever. It’s something he’s been working at for a long time.

Triton head coach Mark Calentino remembers a middle school-aged Marshall showing up at the Tritons’ offseason workouts tagging along with his older brother, Mike, an accomplished wrestler who is now competing for San Francisco State. Kyle began wrestling when he was five, and his older brother was always a willing partner, so the youngest Marshall’s smaller size didn’t stop him from mixing it up with wrestlers three or four years his senior. He said he saw it as a challenge to overcome.

“We knew that he was (special) because when he would come in the offseason and wrestle around, he’d go wrestle with our varsity guys and be able to hang with them,” Calentino said. “It was evident he was going to pick up the baton from his brother and be the standout in the program.”

Those early years helped mold Marshall into a freshman starter on varsity.

He continued to wrestle against Mike in high school, and for his sophomore and junior seasons, he trained with Tyler Meisinger, a standout that placed in the state tournament who now wrestles for the University of Michigan. The wins and experience began to pile up in Marshall’s corner.

Marshall has moved up in weight class every year in high school, and made a significant jump this season. He gained 25 pounds in the offseason, eating more eggs and chicken breasts than he’d care to remember, in order to move from 170 to 195 pounds.

Just like his wrestling style, the move was a calculated decision.

Marshall possesses above-average athleticism for such a heavy-weight wrestler, Calentino said. He doesn’t take the home run shots during a match and relies on his sound fundamentals. But that explosive power is always lurking. Marshall knew that if he could maintain the skills he had as a 170-pounder at a higher weight, he had a shot at putting together a special season.

Since his entrance into the new weight class Marshall has earned wins over top-ranked opponents. He’s defeated five wrestlers who have been ranked in the top-10 in the state this season. At the Doc Buchanan Invitational on Jan. 6, Marshall beat the No. 1 and No. 2-ranked wrestlers in California and placed third overall. The showing vindicated his decision to move into a new weight class.

“I was worried about where I’d be (weight-wise) at the end of the season but I’ve wrestled all the best guys and I know I can beat them so I decided to stay (at the weight),” Marshall said.

In the coming weeks Marshall has a chance to further cement his legacy in the wrestling program. If he places in CIF-SS competition, he’ll become just the second wrestler in school history to place all four years.

In the San Clemente wrestling room on campus, there is a wall of photos of all the wrestlers who’ve placed in a CIF-SS tournament. On another wall is a smaller group of photos dedicated to those who’ve placed in the State Championship. Marshall is already on one of the walls. Now he’s gunning to be on both.

“I think I have a chance to win State so that kind of elevated that goal,” Marshall said. “At first I just wanted to place, but now I want to win it.”