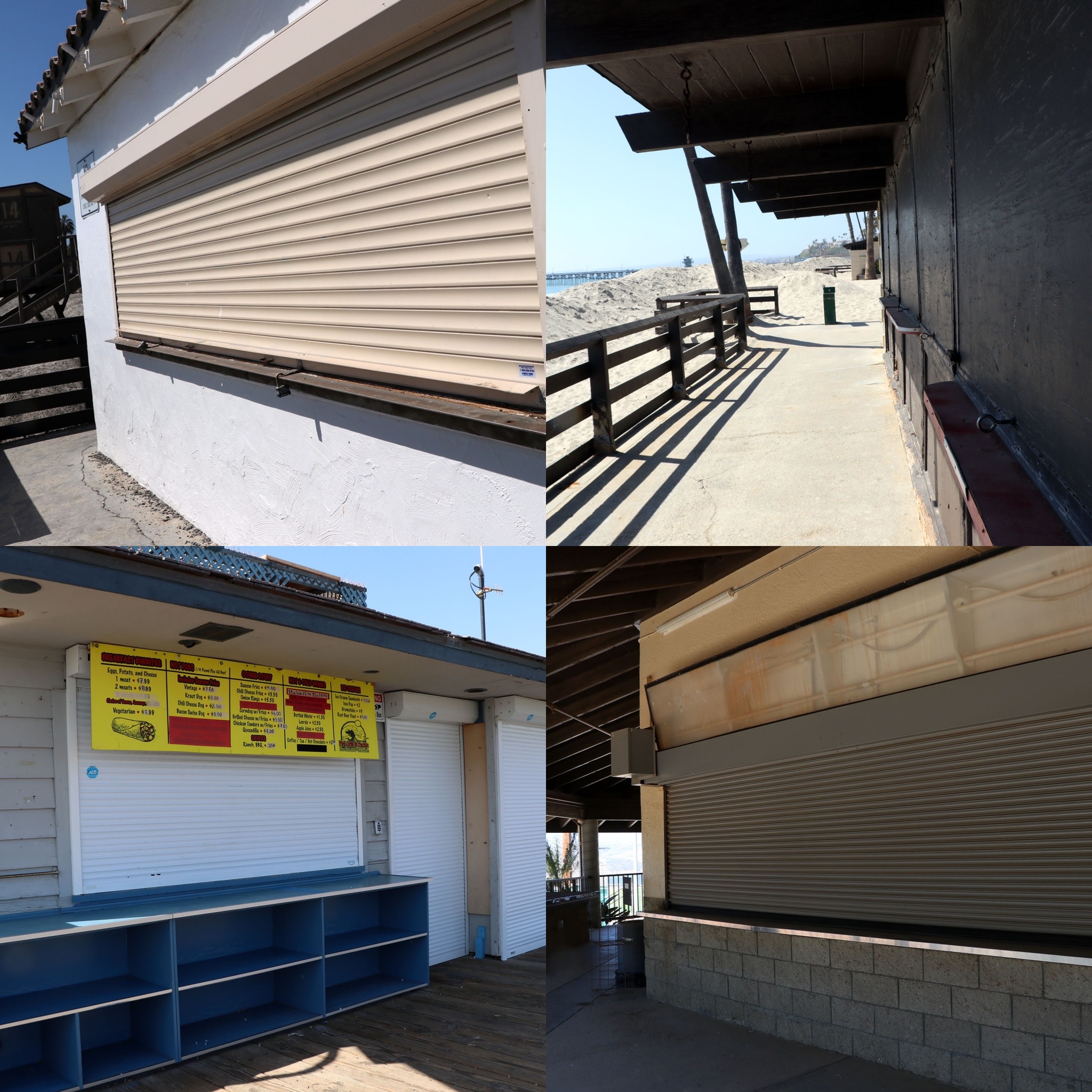 By Zara Flores and Shawn Raymundo

A handful of city-owned concession stands could prove to be underutilized sources of additional revenue. The city council is looking to tap into those revenue sources, approving plans to pursue some management and operational adjustments at the four locations.

Councilmembers on Tuesday night, May 4, unanimously voted in favor of proposals meant to increase the city’s revenues from the four concession stands at the Richard T. Steed Memorial Park, North Beach, T-Street and the end of the San Clemente Pier.

Based on a study and review of the concession stands that the city commissioned last year, the council voted to have the city’s parks department take over food service operations at Steed Park, solicit local restaurants to operate pop-up stands at T-Street and North Beach, and to renegotiate the terms of a five-year contract with the operator of the Pier Bait & Tackle Shop.

Rebecca Genszler, the pier shop’s current operator, implored the council to support renegotiations rather than the city’s own recommendation to seek new management in order to raise the rent.

“It’s more than just a shack that serves food; it’s a family—a fishing family, a military family, a city family, families that come from afar,” said Genszler, who had supporters and staff accompanying her Tuesday night, adding: “The grill is my passion, and I ask for your support to continue the legacy of the little shack at the end of the pier and our beautiful small town.”

Last fall, the city hired Profitable Food Facilities Worldwide to perform an operational review of the four concession stands and make recommendations on how to improve services, as well as increase revenue.

The sports complex is home to four baseball and softball fields, as well as batting cages and a concession stand, San Clemente Island Grill, which has been operated since 2008 by Meg and Greg Greenberg through their company, L.M. Catering.

According to PFFW, outside foods and drinks are not allowed at the park, which charges a $2 entry fee for every person who is not a coach or a player. The PFFW believes there is room for even greater revenue for the city.

Financial documents that the city provided to PFFW show that the city has been receiving the bare minimum in revenue from the operator each year as a result of the outsourced management. PFFW explained that the city stands to earn much more given the amount of traffic the venue sees from tournaments.

“This venue is very unique in the fact that it is a tournament venue that hosted 118 tournament days for out-of-town groups,” PFFW said in its findings to the city.

City staff, in its report to the council, agreed with the contractor’s assessment: control of the operation should be moved in-house to the Beaches, Parks & Recreation Department.

According to the city, it had estimated annual revenues from the concessionaire to be about $31,000. Since the first year of the contract, though, the city averages about $16,200 in annual concession revenue.

Mike Holtzman, president and CEO of PFFW, told the council on Tuesday that the city could have a $1 million operation on its hands.

The city is “looking at a seven-digit operation here, with a lot of opportunity,” he said.

Expressing support for the recommendation, Councilmember Chris Duncan noted, “We’re sitting on a gold mine there.”

He and others on the dais were supportive of the plan as long as staff remain as part-time workers who have also received the proper food and beverage handling training and certifications.

In its findings, PFFW had also recommended moving the North Beach concession stand operations in-house. The city, PFFW said, could earn more than $850,000 over a five-year period running the stand, as opposed to the $90,000 from a vendor.

PFFW said that the most recent contract in place, which provided the city with $300 a month in rent or 6% of the stand’s gross sales, is far too low and could be greatly improved by the city taking ownership.

The previous concessionaire opted to cease operation of this stand. A recent inspection of the building discovered mold on the walls that will likely cost $10,000 to remove—an expenditure the vendor believes is the city’s responsibility, according to PFFW.

City staff, however, instead recommended the council initiate a request for proposals (RFP) to seek operators interested in running the stand as pop-up restaurants under short-term, 60- to 90-day contracts.

“Staff sees this as an opportunity to provide a unique year-round dining experience at North Beach while providing opportunities for local food and beverage operators to utilize a beach location,” the city said in the agenda report.

City staff is similarly leaning toward a pop-up concept at the T-Street concession stand. The city’s recommendation again marks another departure from PFFW’s recommendation, which proposed a meeting with the current vendor to discuss the challenges and future of the stand.

“We realize that it is very easy to simply have 3rd party operator, and even though the T-Street is a great site, PFFW feels it is just too much for a city to take in-house,” read the PFFW report.

The council went with staff recommendation for both beach-side stands, approving an 18-month pilot program to gauge and evaluate the concept’s success. According to city officials, the city has already received inquiries from 10 local restaurants interested in the pop-up concept.

As for the Pier Bait & Tackle Shop, PFFW also recommended the city meet and renegotiate a five-year contract with Genszler, whose contract has already expired but has been managing the stand under a month-to-month agreement.

Because of the stand’s location on the pier, PFFW found that it would be harder for the city to manage this operation. PFFW also noted that Genszler is already “doing a good job” managing the shop.

“This is the most difficult site that the city could take back to manage, because the product has to be delivered to a pier, trash is an issue, parking staff is an issue, and there is a great deal of competition starting at the beginning of the pier,” PFFW said.

However, city staff proposed the council seek proposals for new ownership of the operations, which would stipulate an increase in operating hours, as well as an increase in the base rent and/or gross sales percentage.

Moved by Genszler’s remarks, the majority of the council supported renegotiations. However, Mayor Pro Tem Gene James suggested a meeting with Fisherman’s Restaurant and Bar, located at the base of the pier, about possibly managing the shop.

“At the end of the day, I want to look at making money,” James said, adding: “When you look at the synergy that could be created by (Fisherman’s) operating there, with the payroll they have and their ability to move product … I think we certainly have to look at that.”

While Duncan generally agreed with James’ points, he noted that Fisherman’s and the snack shack don’t get the same traffic and clientele. He also stressed that the shop, while not necessarily a revenue generator, is meant to be a community staple.

“I think what we’re looking at there is more of consistency, reliability, high quality, friendlies,” Duncan said. “That’s what I think people are going to look for at the end of the pier, not the fish and chips that they can get at the base of the pier.”

Newly appointed City Manager Erik Sund suggested to have the city first renegotiate the contract to set new parameters on rent and service hours, but should discussions go awry, the city can test the waters elsewhere, including Fisherman’s.