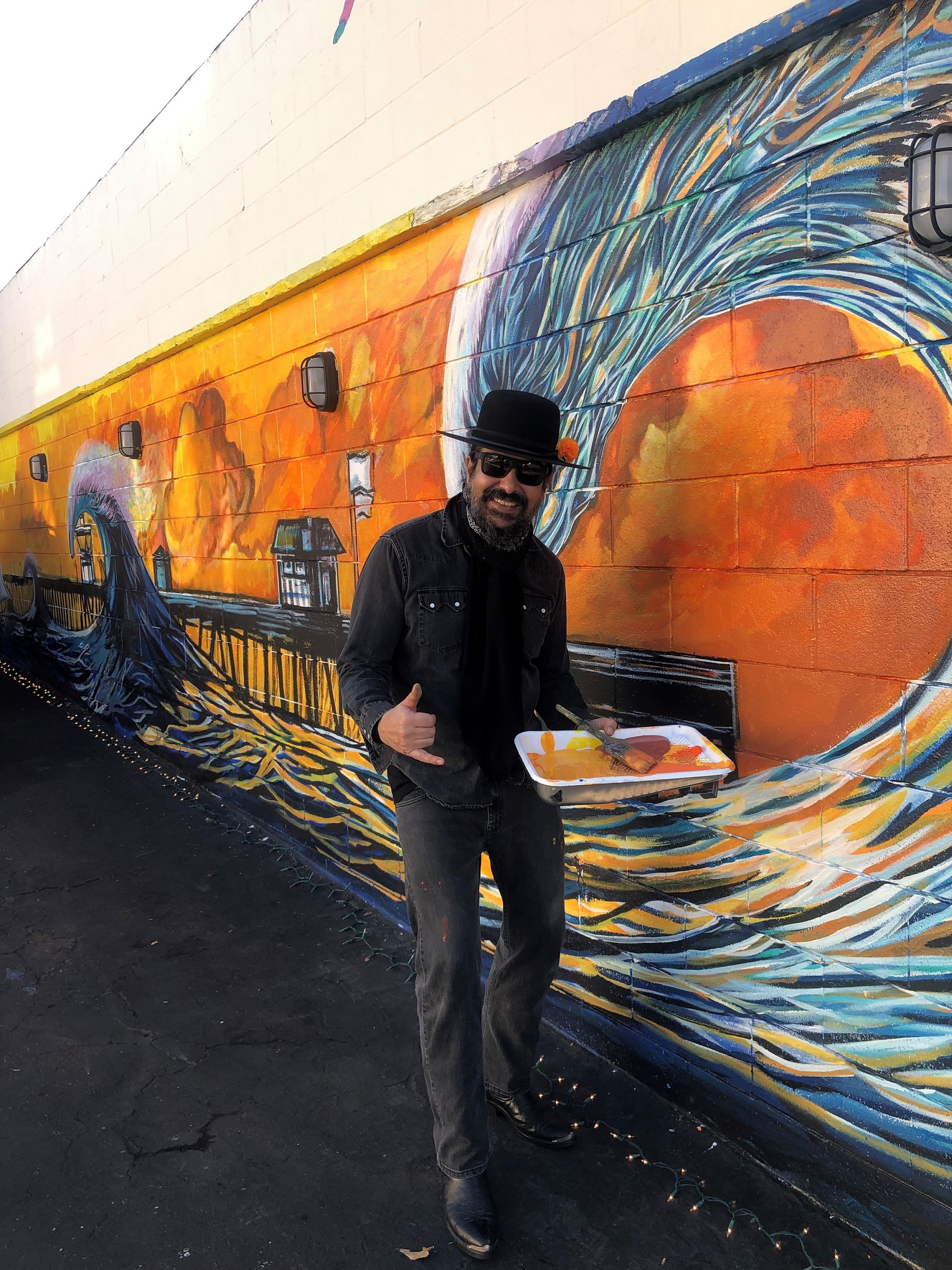 Joshua Paskowitz, a member of the famed Paskowitz family known worldwide for their travels and experiences in surfing, is hosting an art show at the Collective Energy Center in San Clemente on Friday, May 13.

The event commemorates the opening night of “The Merry Merry Month of May,” a collaboration between Paskowitz and the center that will host additional events throughout the rest of the month.

The solo art show will reflect the San Clemente-based artist’s recent growth in his work, exhibiting wave art, portraits, and interpretations of surf culture that intend to take a nostalgic look at the sport’s history.

Paskowitz describes his wave art as the way he expresses his artistic impulse to the public, and his diversion from the family of surfers from which he originated.

“Me painting waves is kind of like Magic Johnson’s son painting basketball players,” he said.

Paskowitz attempts to achieve realism, drama, and emotion in his wave art, which shows the dark and foreboding nature of the ocean that exists along with the fun and beauty that come with spending time at the beach and in the water.

While the wave art is his main focus currently, his drawing and painting of figures and portraits in a graphic style has an extended history within his work.

The influences of reading comic books and heavy metal magazines in his childhood encouraged Paskowitz to start drawing initially. Now, with painting, he has moved on to tackle interesting projects such as creating murals and working on surfboards.

“That being said, the San Clemente theme is my new muse,” Paskowitz said.

Painting the mural at the new downtown restaurant The Real Empanada, along with paintings for friends who have moved away from the city, has led to his current love of capturing the municipal pier and local surf breaks.

The legacy of aloha, a time-tested tradition that was passed to Paskowitz’s father and the family as a whole from swimming and surfing legend Duke Kahanamoku, serves as a defining personal characteristic and a value in the Hawaiian sport of surfing that was instilled in the artist.

Kahanamoku’s lessons of taking the time to be a great listener, and reflecting on the blessings that have pushed Paskowitz to where he is today, influence him daily.

“My work is about me embracing those traditions and just trying to reflect in my work some of the coolness of the community and the characters that I’ve met in my life, through the sport of surfing and in the culture of surfing,” he said. “I like to paint great figures in the sport and try to exalt them, because I feel like it’s really valuable.”

After growing up in a camper and doing what Paskowitz describes as “awesome stuff” in countless different places, he appreciates being a part of San Clemente and using his talents to recreate the greatness he experienced and help others realize their own creative power.

Being the city’s “village artist” is a role he would certainly take on with open arms.

His connection with the town started earlier than most might think, however. At the age of 13, he would take opportunities to stay with friends in San Clemente while his own family went on the road.

“The community of San Clemente really adopted me, like really took care of me, from the time I was in my early teens,” Paskowitz said. “That feeling, that sense of unity with all the different families that were here … it was magical.”

He mentioned that it was special to be a part of the city during the 1980s and ’90s in what he called a “powder keg,” where people were breaking the boundaries of surfing and had overgrown identities. Figures such as Fred Swegles and Caveman Joe held a sway over Paskowitz, molding his appreciation for loving the town in which he is now raising his own children.

In his eyes, the deep legacies of those who have spent time in San Clemente and of surfing itself have made, and will continue to make, the city unique.

Following Friday’s art show, there will be a Paint and Wine Night on May 21, a pop-up shop on May 26 that will help employ young adults with special needs, and an acoustic music set on May 29 to close out the month.

Paskowitz is excited to display what he feels is his best work yet, which reflects what he has learned over the past 10 years.

“I’m just really grateful for this opportunity to show everyone where I’m at right now,” he said. “I think that there’s a sense of surf art as being kind of like a niche or a weird novelty, but I want to show that, like, the waves are really fine art.”

He believes that the more he is able to express in his art, the more excited people will get.

Art is magic and can transcend life itself, said Paskowitz, who further described the ability to be creatively expressive as similar to being able to fly.

“I feel like the ocean and our connection to the ocean and surfers is also very, very deep, and I think that being able to hold a piece of that raw power of the ocean in the form of a painting is pretty cool,” he said.

The art show will take place from 6-9 p.m. at the Collective Energy Center, located at 215 Avenida Del Mar, Suite L. More information about the exhibit and the events to follow can be found at collectiveenergycenter.com.