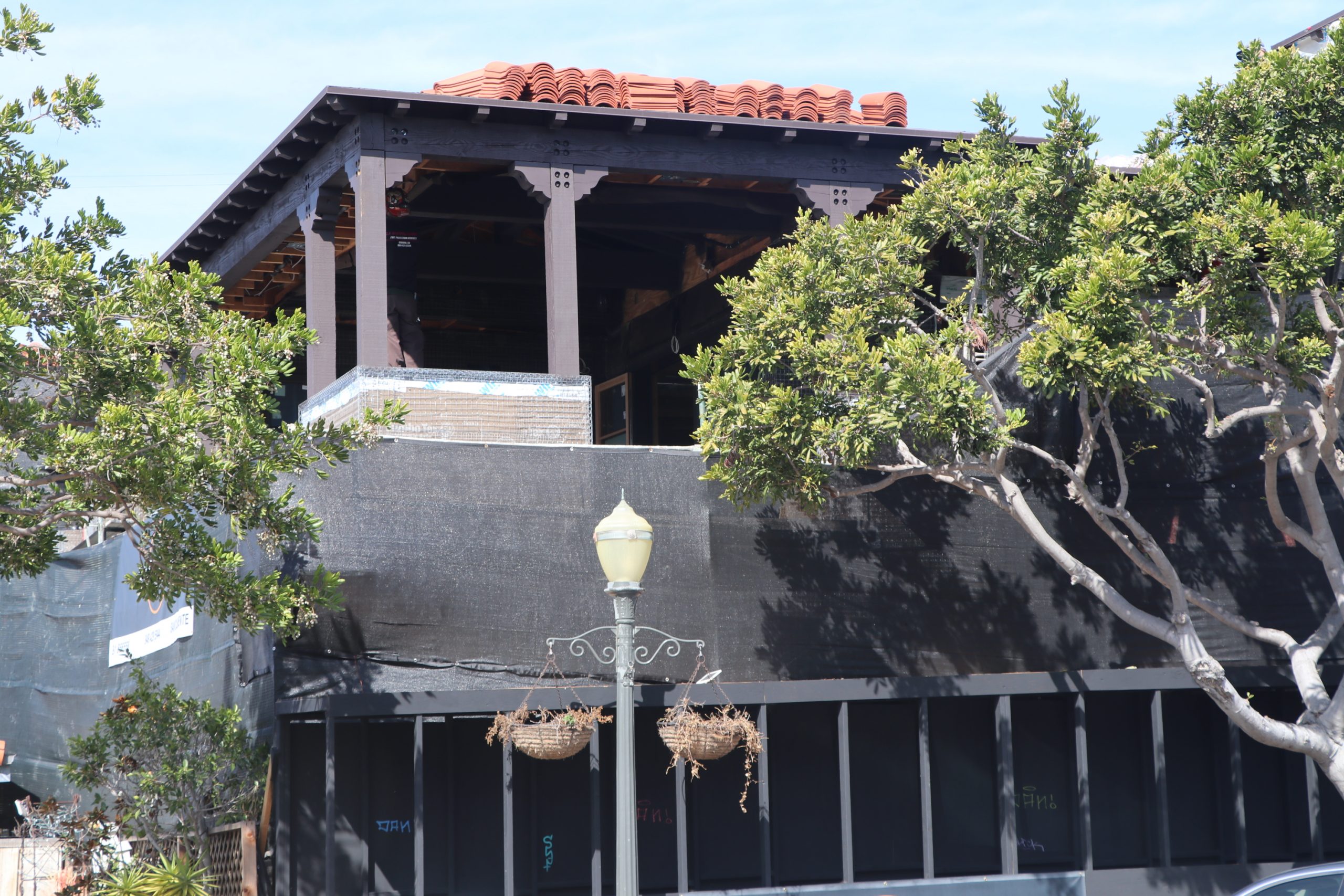 Passersby of the structure that is under construction right in the heart of Avenida Del Mar are witnessing the makings of a feat that has never been done before.

For the first time in Downtown San Clemente history, a brand-new, two-story restaurant will soon be open to the public.

The project has been ambitious from the beginning, starting with the proposal that was filed by former Community Development Director and project consultant Jim Holloway, and approved in June 2019.

Listed were plans to demolish a one-story building and construct a two-story restaurant while combining four lots, with the current property at 226 Avenida Del Mar comprising the whole space.

The process of pushing forward the venture took several months, with reviews conducted by the Cultural Heritage Review Subcommittee, the California Coastal Commission, and the Planning Commission, before city approval occurred.

Holloway was responsible for bringing the plans to the city and the Coastal Commission, and said there was a struggle when San Clemente’s status as a “quality-of-life community” met a project that would provide the first net addition of square footage to the downtown area in more than 35 years.

“This property’s in the coastal zone,” Holloway said. “We have strong architectural guidelines, and all those things make it challenging.”

Change is never easy, which Jeff Moore, co-owner and business representative of the property, learned during times in which opposition groups stood against the project’s design.

Moore attributed some of the opposition to the “initial shock factor” of learning that a two-story restaurant would be developed and to people being unaware of what he and the primary owner wanted to do with the property.

“They were just scared, and they could probably envision a massive behemoth … going in with music (and) loud noise,” he said. “That wasn’t our vision.”

Instead, Moore described their desire to build an upscale, boutique restaurant that fills a void of what San Clemente lacks.

Concerns stemmed from the restaurant’s location right next to a San Clemente historical structure at 228 Avenida Del Mar—a less-than 1,000 square-foot residence built in 1928 that currently houses the antique furniture and gift shop The Abode.

“The scale and massing of the building is just too big next to that historic building,” said Larry Culbertson of the San Clemente Historical Society.

The new construction dwarfs the older home, and in Culbertson’s words, goes against the requirement listed in the historic preservation element of the city’s General Plan, which states new development must be respectful to historic structures.

Culbertson added that the Cultural Heritage Review Subcommittee “blew off” his attempts to call the occurrence to their attention. He said a more respectful approach would have avoided building the restaurant right next to The Abode and allowed for 10 to 15 feet of space.

“I don’t think we were paid attention to,” Culbertson said of his and others’ concerns.

Linda Mickelson, owner of The Abode, said the only concession they received was pushing back the building by just a few feet.

“There were concerns with the proximity of the restaurant building and a trash enclosure to the adjacent historic property,” Jennifer Savage, assistant to the city manager, said in an email. “However, the project team, the historic property owners, and City staff, worked together to address concerns and finalize a design, which represents the ‘Spanish Village by the Sea.’ ”

Savage also said that the project will further the Spanish Colonial Revival vision set for downtown, which was a priority of the restaurant’s ownership group.

Moore said that the architectural design, which adds a slight modern twist, is his favorite feature of the property.

“Another really neat feature is, we did a nice mural on the side of the building of Ole Hansen himself,” he added.

Beyond the initial backlash, Moore has not had any problems arise with neighboring residents or businesses.

Mickelson made sure to mention that her shop is looking forward to the restaurant’s presence, plans to adjust her own hours accordingly, and that she hopes it brings increased business to everyone on Del Mar.

“We have been joking with our customers about a (pass-through) window out our side windows to them since we can almost touch each other … for lunch and cocktails … we wouldn’t even have to leave our house,” Mickelson said.

Regarding the restaurant itself, Moore said that the tenant to whom ownership agreed to rent out the space will be Rare Society, a San Diego-based steakhouse with multiple locations.

It beat out several, similarly high-caliber competitors. Ownership visited each of their final three candidates in person for dinner, and Rare Society’s “unparalleled” service was part of what sealed the deal, Moore said.

They also felt the restaurant fit San Clemente best, in that it will be the steakhouse that San Clemente diners cannot currently experience in town.

The desired atmosphere will allow guests wearing shorts and sandals, as well as those dressed up for a night out, to feel comfortable and enjoy themselves. Similarly, the food, which Rare Society serves as a kind of elevated charcuterie board, will provide the same vibe.

“You can go and you can get out of there for a very reasonable amount, or, you can go and spend the house,” Moore said with a laugh.

Like any typical construction project, theirs has been sidelined at times because of COVID-19 and inflation, but features of the restaurant will include an open-floor concept and a coveted balcony unique to Del Mar.

The layout indoors was specifically impacted by the pandemic. As the ownership was reviewing possible tenants at the time, they were forced to continue building and provide the best layout they could of the kitchen, bar, and bathroom locations for whoever would eventually step in.

Moore, a lifelong San Clemente resident who works mostly within the residential mortgage industry, saw the continuing commercial development in the city in 2018 and wanted to start a restaurant to have some control over what was going into San Clemente, instead of letting a chain take an open spot.

“I think a huge part of why I wanted to go into this was because San Clemente gets behind its projects,” he said, citing the success of the Vine Restaurant & Bar. “If the residents of San Clemente love their restaurants or love the businesses, they support it in a way I’ve never seen before.”

Moore is excited to give San Clemente residents and visitors a taste of something new in town while working with a partner he believes will be a great fit.

The property keys are expected to be handed over to Rare Society near the end of April, with a timeline of opening in October as a best-case scenario.

The latest expected date of opening is early 2023.