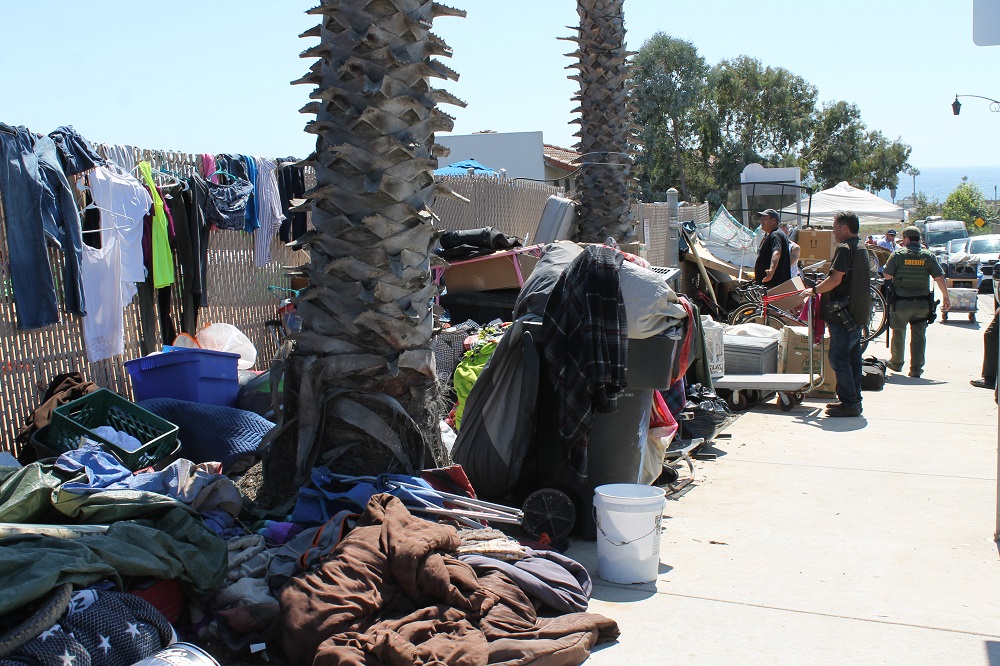 On the day of the cleanup, San Clemente Times spoke with several homeless individuals, some of whom felt the city had tricked them into leaving the campsite while not letting everyone back in.

“If they would have told us, we could have made arrangements,” said one camper. “Now they’re going to have a bunch of displaced people going back into the city.”’

Makshanoff said about two dozen homeless campers took advantage of transportation vouchers to be relocated elsewhere. He said county health care officials would be at the campsite for the rest of this week.

Braun provided the following statement from OCSD’s Sheriff-Coroner, Don Barnes: “I want to make clear that being homeless is not a license to break the law. Other than protections provided by federal court rulings, the County’s settlement does not prevent law enforcement from taking action against criminal activity. The Orange County Sheriff’s Department will continue to actively patrol the communities we serve to ensure public areas do not become havens for criminal activity and illicit drug use.”

Acting Mayor Dan Bane said on Thursday, Aug. 26, that he and several other south county mayors met with OC Supervisor Lisa Bartlett and the Sheriff’s department. “There was a lot of very frank discussion about how we can work towards regional solutions here in South Orange County, and there’s no silver bullet I can report out (of the meeting) that this is done, but I thought it was an incredibly productive meeting that led to, as Mr. Makshanoff said, a very coordinated effort as it relates to our encampment.

Bane said he and city officials will have follow-up meetings in the next two weeks with the seven Orange County mayors who signed the letter to Supervisor Bartlett along with OCSD, and he expects “those good discussions to continue.”

Some changes have been made at the homeless campsite on Avenida Pico in San Clemente.

Homeless campers had been given notice that the city would be closing the campsite for routine maintenance and cleaning on Friday, Aug. 30. Residents were asked to remove all of their property from the site, beginning at 7 a.m.

“That was a deception,” said a homeless man named Jess, who asked to use only his middle name so he could speak candidly on the matter.

Jess and several other homeless campers told the San Clemente Times that in the morning of Aug. 30, each camper was given one or two plastic bins to store their personal property in.

“They never said what they were going to do afterward,” Jess said.

Once campers packed up their stuff and took it off the site, many lined the sidewalk outside with their belongings. Anything left behind would be declared abandoned, removed and stored by the city.

City officials then began installing new, green tents that now line the inside perimeter of the site.

Campers were told they would need to provide officials with proof they had ties to San Clemente in order for them to return to the campsite.

“You have to have an address that says you live in San Clemente,” said Rodger Etzwiler, a homeless man who has been staying at the campsite.

Deputies with the Orange County Sheriff’s Department were on the scene, as well as county health care officials, to assist during the transition.

Carrie Braun, public information officer for the Orange County Sheriff’s Department, said OCSD was onsite that day solely to keep the peace alongside the county assessment teams from the health care agency.

Erik Sund, assistant city manager said, “The city chose to buy new tents to create some uniformity with regard to the campsite and maintain or minimize the amount of trash and other things coming in.”

Those at the campsite must stay in the city-provided tents, Sund said. Campers can also bring in only what they can fit inside a 65-gallon trash can.

Sund said the goal is to maintain a safe, public area at the campsite.

The other new requirement at the campsite is those who stay there must be San Clemente residents, Sund confirmed.

Documents people can provide include an identification card with a San Clemente address on it, a utility bill, or a high school diploma.

“We are open to whatever documentation they can provide that shows proof that they lived in San Clemente,” Sund said.

The city maintains it communicated the change of plans to homeless people during the cleanup process.

Sund said he is not concerned about those who will be displaced by the new residency requirement implemented on Aug. 30.

“We have outreach services who are providing a number of options and resources,” he said, such as “Homeward Bound or other services to help bridge them to where they can go.”

Sund said the city will enforce the rules the council adopted at the homeless campsite. He said the city has also hired a new security company to provide onsite security services.