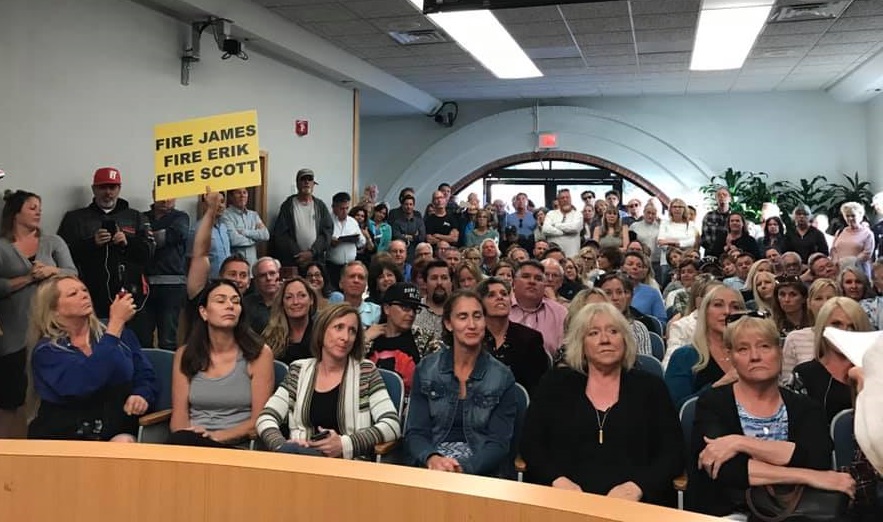 Residents spoke their minds during a May 7 city council meeting-turned-impromptu-town hall rally about one of the swirling hot debates in San Clemente right now—homelessness.

The city clerk had announced earlier that day that the regularly scheduled council meeting was adjourned due to a lack of quorum, meaning three or more council members wouldn’t be able to attend.

But that didn’t stop Councilmember Laura Ferguson and Mayor Pro Tem Dan Bane from welcoming hundreds of people inside the council chambers to address an issue on which locals felt they had been left out.

“It was very cathartic,” Ferguson said. “Everybody just appreciated being heard.”

Both Bane and Ferguson said they were aware of the mounting public pressure on council to do something about the homeless situation and felt the need to let people come and speak.

“When you lock them out and put (the issues) in a closed (council) section week after week, people aren’t very happy about it,” Ferguson said.

Nearly 200 people packed the council chambers that night, in a first-ever event of its kind, with residents even taking the council’s empty seats at the dais. More than two dozen people spoke without the customary three-minute limitation, Ferguson wrote in a Facebook post.

“The common theme was the city’s letting us down,” Malamud said.

Malamud, who admits he may be a little more radical on the matter, is one of three plaintiffs who filed a federal lawsuit May 7 against the city of San Clemente and now-deceased Mayor Steven Swartz, demanding public rights to speak and be heard during council meetings.

“We are not asking for any monetary damages,” Malamud said. “We are simply asking them to comply with First and Fourteenth Amendment rights, the Brown Act and the California Public Records Act.”

In a recent press release, City Manager James Makshanoff said the city and its staff have taken the issue of homelessness “extremely serious” and that they are working hard to develop solutions to the crisis.

But due to a class-action lawsuit filed against San Clemente and several other cities, Makshanoff said the city has been limited in its ability to discuss the homeless issues in public. “The lack of communication should not be misinterpreted as a lack of attention to this issue,” the city manager wrote.

During the next city council meeting on May 21, Makshanoff said city staff intends to provide an update in an open session on site and shelter options for the homeless, zoning and CEQA implications, costs and potential timelines. He estimated that setup for a temporary shelter could cost the city as much as $500,000, with operating costs topping $1.9 million annually. View the rest of the city’s press release online.