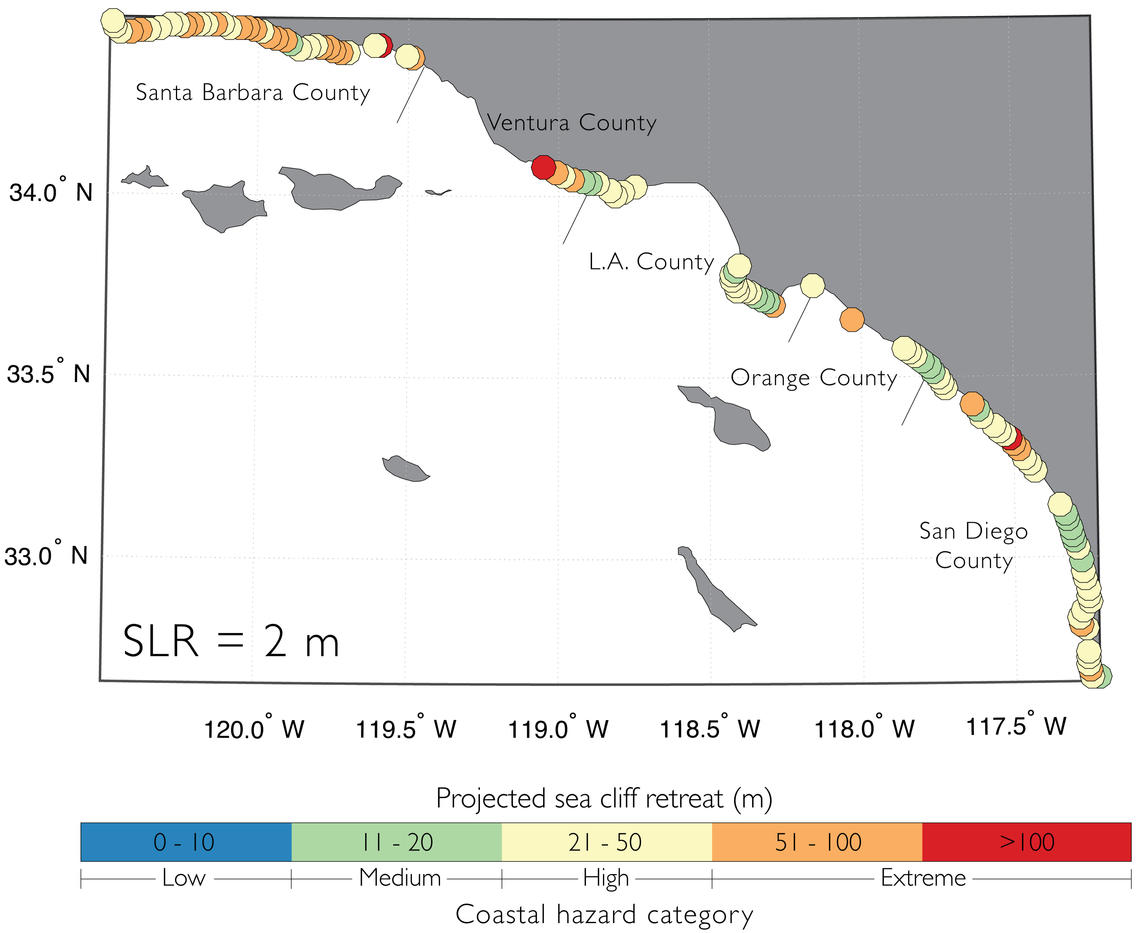 The U.S. Geological Survey (USGS) recently published a study that shows significant erosion to California’s coasts could be more dramatic than previously thought.

According to an announcement by the USGS, the study “combined several computer models for the first time to forecast cliff erosion along the Southern California coast.”

The research forecasts sea levels could rise from 1 and a half feet to more than 6 and a half feet by the year 2100. The study analysis said that bluff tops for about 300 miles of the coast in Southern California could lose 62 to 135 feet by that time and much more in certain areas.

“USGS researchers combined five different computer models that forecast how cliffs crumble in a manner similar to how meteorologists blend several hurricane forecasts to get the best predicted path of the storm,” the analysis stated. “This is the first time anyone has reported an ‘ensemble forecast’ for cliff retreat that produces a range of values for each section of coastline instead of each model yielding one number. Scientists used earlier studies to supply the erosion models with sea level rise values from 1.6 to 6.6 feet, long-term wave energy forecasts and other data.”

The study analysis stated that without the bluffs to deposit sand from eroding cliffs, beaches in Southern California “may not survive the rising sea levels” and “bluff-top development may not withstand the estimated 62 to 135 feet of cliff recession.”

“Consequently, managers could be faced with a difficult decision between prioritizing private cliff-top property or public beaches by permitting or prohibiting cliff armoring, respectively,” the study’s collective authors said in a joint quote.
“Sea cliff retreat is a serious hazard,” said Patrick Limber, the USGS research geologist and lead author of the study. “Unlike beaches, cliffs can be stable for decades between large landslides that remove several feet of bluff top.”

Limber also said that the USGS is still learning more about cliff erosion and that there should be some discretion when applying the site-specific scale to the erosion scale because there is a great amount of uncertainty in this forecast. He said further research will need to be conducted to verify forecasts.

The study is part of a USGS effort to forecast climate change effects of the Southern California coast using the Coastal Storm Modeling System, the analysis stated.

San Clemente appears to be in the medium to high level of concern, whereas areas of Ventura and Los Angeles coastlines were designated in very high and extreme concern areas.

The city is currently conducting a sea-level-protection study that will take more than a year to complete related to its coastal implementation plan, which complements its coastal land use plan that was adopted earlier this year. These plans are through the California Coastal Commission in order to give the city more leniency in approving coastal development permits and other jurisdiction, rather than have to go to the commission for everything within the coastal zone. A link to the study can be found in this article at www.sanclementetimes.com.