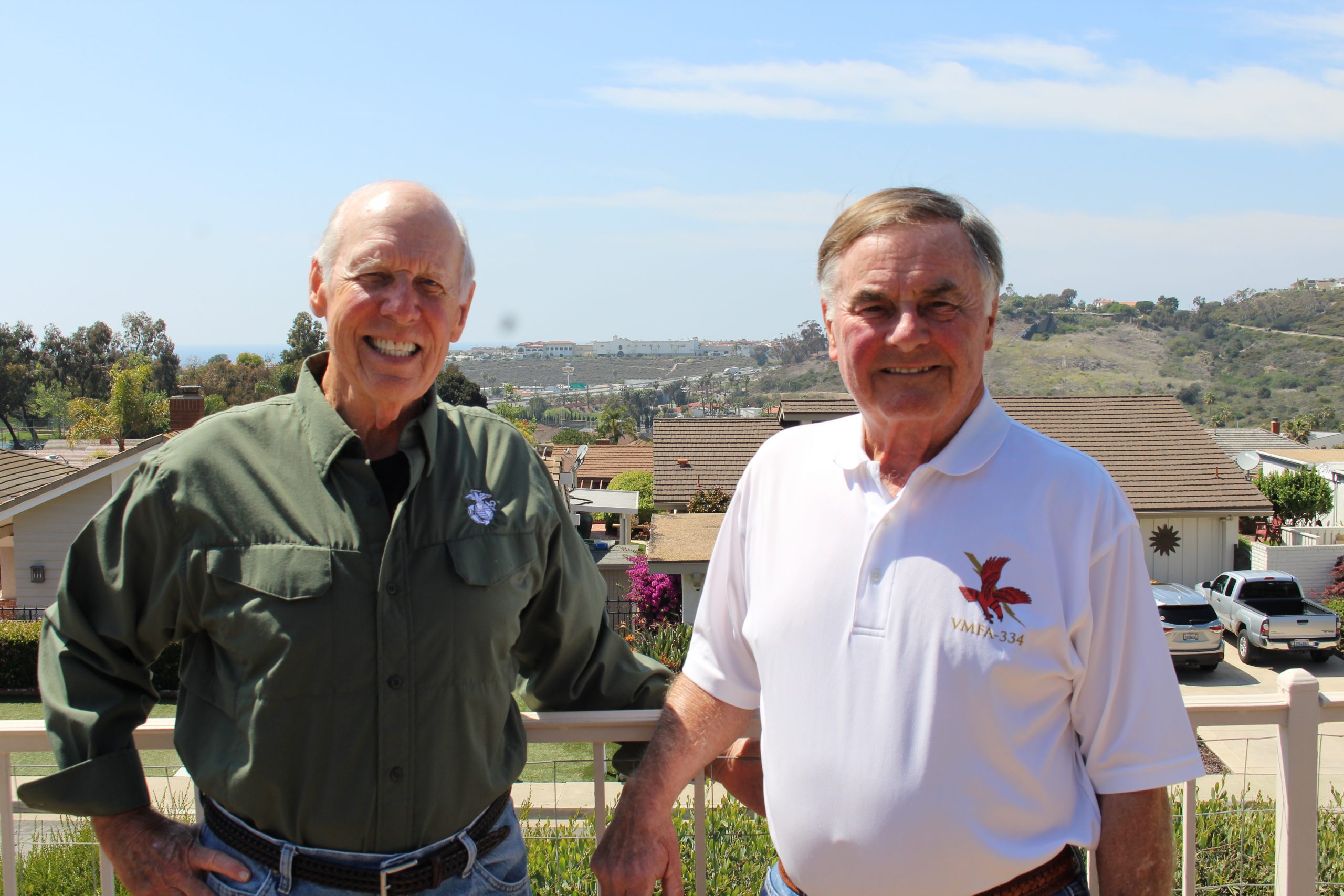 A pair of longtime friends sat across from each other at a kitchen table inside a home in a quiet San Clemente neighborhood, making jokes and telling stories, just as they always do.

The scene was a significant contrast to the hot, muggy, war-torn city of Da Nang, Vietnam, where they first met in 1968.

San Clemente Times sat down with Larry Rannals and Don Brown on Monday, April 4, to recount how their life stories started far apart, intertwined near the middle, and currently parallel in this seaside community.

Rannals was born in May 1943 in Amarillo, Texas, where he spent part of his childhood before his family eventually settled in Pasadena, a suburb of Houston, where he was raised starting from the age of 5. Brown was born a month later in June 1943, and grew up in Glendale, California.

Both were destined to serve for the United States military through the country’s mandatory draft that would end in 1973, although they would take differing paths.

Rannals went to college at Texas A&M University, a school with deep ties to the armed forces that was known as the Agricultural and Mechanical College of Texas when he first began studying there.

Brown enlisted in the U.S. Naval Academy right out of high school, and both graduated from their respective universities in 1965, after the Vietnam War had already begun.

With his service obligation, Brown chose to enter the aviation route within the Marine Corps after finishing school. He would spend the next three years working his way through basic training in Quantico and flight training, as well as a stint at the former Marine Corps Air Station El Toro, located near Irvine, before he was sent to Vietnam.

“I’d only been working there maybe three months when out of the blue I got a draft notice,” he said. “I decided, ‘Well, if I got to go in, I’m not going to join the Army as a (Private First Class); I’m going to see if I can get in one of the other services.”

While unable to join the Air Force, Rannals met with Marine Corps officers before signing up to enter their program. He then went to Officer Candidate School and was commissioned as a second lieutenant before going through flight training and also spending time at the El Toro base.

Rannals trained to fly reconnaissance aircraft, using cameras located at the bottom of the planes to do military observation.

He was assigned to the Marine Composite Reconnaissance Squadron named VMCJ-1, and landed at the Da Nang base in August 1968. Brown arrived about a week later, to serve in the Marine Fighter Attack Squadron known as VMFA-334.

The men would both spend 13 months serving in Vietnam.

Rannals, the son of a World War II veteran, was excited to join the conflict. With what he described as an incorrect view of the situation at the time, the influence of John Wayne movies and the success of the U.S. effort in WWII made him think that he would land, the war would be over soon, and they would return safe and sound.

“I just had this attitude (of) ‘Hey, I can’t wait to get over there, be part of what we’re doing; we’re going to do some good and we’re going to kick the North Vietnamese’s butt,’ ” he said.

Brown chimed in at the end to echo Rannals’ thoughts.

All who were stationed at Da Nang ate at the mess hall and had to take a crew bus down to the flight line, where the soldiers would receive their missions and the information necessary to carry it out. The route was a few miles each way, which allowed plenty of time for casual conversation.

“You go hop in the back of the bus and you start shooting the breeze with the guy that’s sitting next to you on the bench,” Rannals said.

Brown followed by stating, “I think that’s where I met this Aggie, and so we’re talking and ‘BS-ing’ on the way down: ‘Where are you going today? What’s your mission?’ ”

As Rannals’ reconnaissance missions typically required only a single aircraft, the only time their squadrons flew together was when they had to travel to North Vietnam, in which the planes, sans weapons, needed support from the fighter jets.

“We briefed (the fighter crew on) the mission, where we’re going to go, what we’re going to do and so forth, and we’d all launch,” Rannals said. “Then, when we get to the target area, we’d start a descent down to the altitude we were going to be flying (at) for the photographs, and the escorts would follow behind us.”

Brown said the real dangers for the escort crew came after the Navy or the Air Force would conduct a major strike mission and the reconnaissance plane would follow to get photos of the damage, after the enemy on the ground was already angered.

“A photo escort mission up north for us was not fun,” Brown said. “You get a lot of stuff, a lot of tracers flying by. You’re going as fast as the airplane would go.”

The men did develop a friendship, but it was short-lived at their base, as Brown moved to a different base about five months into their service time.

However, by remaining in the Marine Corps, they were able to see each other relatively frequently. They were assigned to the same air station on multiple occasions in the U.S. and abroad, as both worked their way up to the rank of lieutenant colonels commanding different squadrons.

“So, we’re dealing with each other on a daily basis, back and forth over the years, and then we ended up retiring,” Brown said with a laugh. “He’d bought a house down (in San Clemente) many years ago, and I ended up moving down here about 15 years ago. We look at each other and go, ‘Where do I know you from?’ ”

Each of them has been active in the community, as part of local organizations such as the Exchange Club of San Clemente and the San Clemente Dons, and a golf group that meets on Wednesdays.

“Now, we’re seeing each other probably more than we ever have,” Brown said. “We’ve had many a meeting in this very same house for other purposes, but it’s that time of life where we want to give back to the community, and that’s what we’re doing.”

Rannals explained that within an entity as small as the Marine Corps, and even the smaller aviation section, it was easy to get to know people.

“If you stay in as a career, you spend so much time seeing each other at the same locations that I don’t need to call him up on Christmas and say, ‘Hey, Merry Christmas,’ because I know I’m going to run into him two weeks later,” he said.

Brown added that within the Marines, people could go to any base and find someone they had not spoken to in 10 years, and immediately pick up right where they left off, with the host introducing them to other friends who are all willing to provide mutual support.

The aspects that bonded people together, especially within a “brotherhood” such as the Marine Corps, were the intense combat situations that soldiers survived together, and after coming back from a mission, people would compare notes over a beer at the club.

Down the line, 50 years later, everyone who took part can tell stories and recall a “defining moment” in their lives, according to Brown.

There is an inherently distinct experience in being on the ground, feeling, seeing, and hearing all parts of war, such as bullets whizzing by or the ground shaking, to which only a few can relate.

“When you get out there with a real rifle and the real ammo in the real thing, and there’s a real score in which you can be a part of, it brings it to a whole different level of intensity and concentration and emotional levels that you have to deal with,” Brown said. “You have to perform.”

Rannals described another common experience that Marines and other veterans share, knowing each went through boot camp, flight school, or Officer Candidate School, and made it out.

“It’s training to learn how to perform the mission (with) these aircraft we flew; you know what it took to get through that, and you know that other individual that’s flying the same aircraft had to go through that same experience,” he said. “It’s just sort of like a common bond that you respect them, because you know what it took to get there, and they feel the same way about you.”

Brown took away the importance of camaraderie and professionalism from his time in the Marine Corps, and the feeling of a sense of purpose.

The Marines’ emphasis on discipline, work ethic, trustworthiness, and honesty left a lasting impact on Rannals, even though those were all attributes he was introduced to as a child.

“I guess you don’t see the value in some of them until all of a sudden you become an adult and you begin to live a certain kind of life, and you gain that kind of appreciation of, ‘Hey, those are important things about life that make you a better person,’ ” he said. “That’s just one of the things I think we get.”