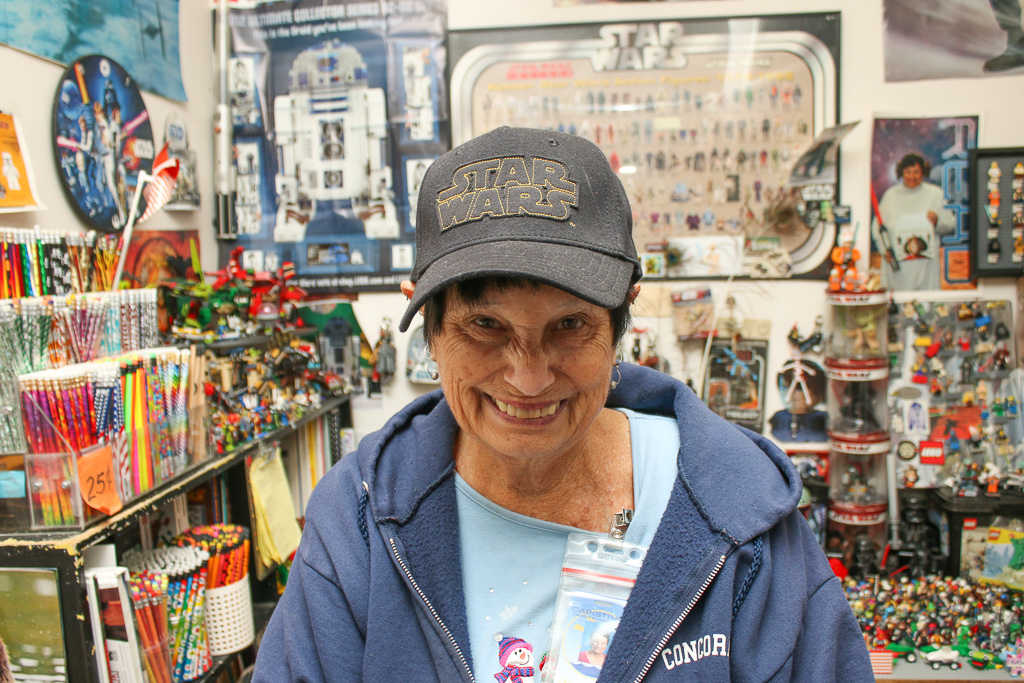 A disturbance in the force at Concordia Elementary shook one of the school’s Jedi knights after many of her treasured LEGO Star Wars figurines were destroyed. The incident took place Nov. 20, two days before Thanksgiving, in Jeanna Bassett’s classroom.

Many of the assembled LEGO figurines were destroyed, or “killed,” as Bassett puts it. Some of them are not exactly quick fixes; one of the Death Star figurines has more than 7,000 pieces that have to be assembled.

Tucked around the corner from her art classroom, there’s an entire storage space filled with the various collectibles, and she said she has more at home.

The room in which Jeanna Bassett keeps her Star Wars collection is about 10 by 5 feet and is packed with figurines from the popular franchise. Photo: Eric Heinz

It is estimated that Jeanna Bassett, an art teacher at Concordia Elementary School, has collected more than 100,000 LEGO pieces from Star Wars sets over the years. Photo: Eric Heinz

Jeanna Bassett holds up a photo of a LEGO storm trooper she made for her son many Halloweens ago. Photo: Eric Heinz

Although San Clemente Police Services named Bassett as one of their secret Santa recipients after her LEGO collection was destroyed, she donated the money to Concordia Elementary when her collection was made whole by donations. Photo: Eric Heinz

“A little girl gave me three LEGO (figures) and one boy made one for the library,” Bassett said. “The kids are really upset, and they say, ‘We’re so sorry about your LEGOs,’ and they give me hugs and letters. I love that part of it.”

Some of the collectibles are first-edition, in mint condition and include a vintage marquee poster, and Bassett is able to recite when and what each figurine is from.
Bassett was in one of the first classes at Concordia in 1955. She’s been teaching art there for nearly 42 years, but her love for Star Wars began with her children, who became infatuated with the release of the first three films.

Since learning of the destruction, LEGOLAND sent replacements, and volunteers have donated to the cause. Bassett was selected as one of the Secret Santa recipients by San Clemente Police Services, but she donated her contribution back to the school after her replacements arrived. At least three teenagers have been questioned by school authorities in the incident, said Lt. Mike Peters, chief of San Clemente Police Services.