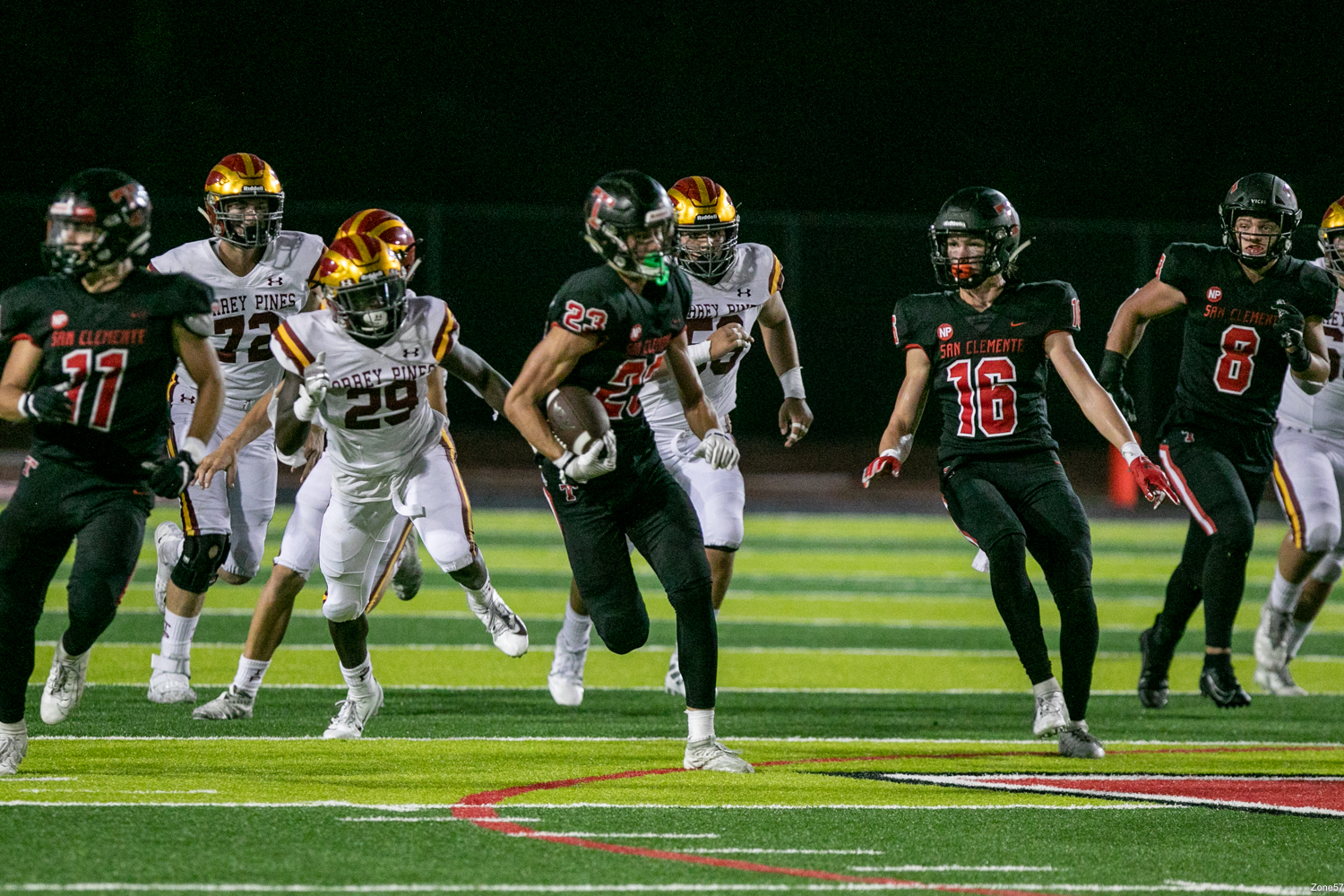 Waiting for Winter: A Month Away From Its Scheduled Start, Football Delayed Until January

These dog days of summer usually come with signals that the football season is right around the corner.

In a “regularly scheduled” world, summer camp would have closed last week, and fall camp would start next week in preparation for San Clemente High School’s scheduled season opener on August 21 against Oceanside.

However, as things go in 2020, “regularly scheduled” has been thrown out the window due to COVID-19. On July 20, just one day shy of a month away from the Tritons’ season opener, the CIF State and CIF-Southern Section announced a revised schedule that pushed the opening of football season back to Jan. 8, 2021 and sent all high school sports back into their “wait until further instructions” mode.

“I think that, No. 1, it’s the right decision at the right time,” San Clemente football coach Jaime Ortiz said. “Everyone’s working to find answers, and the safety of our players is No. 1. I wouldn’t want to have a start-stop situation (of opening the season when coronavirus restrictions are lifted, but closing down if restrictions return).”

Like the rest of the Capistrano Unified School District, San Clemente was ready to go for summer conditioning camps on July 6, but just ahead of that date and eventual state guidance against all youth sports activities, those plans were canceled before they started.

For now, CIF-SS listed the official date for the first full practices of football season opening on Dec. 14. Whether that date sticks or if there are any conditioning camps, limited or otherwise, before then will depend on Orange County’s ability to physically reopen schools. Based on a state mandate, schools cannot physically reopen until their respective county is off the state monitoring list for 14 consecutive days.

“The biggest thing is getting the kids back on campus, but when is that going to take place?” Ortiz said. “For now, we have a date, we know when that is, but we’re trying to get back on campus. That’s when we can begin that process.

“In a perfect world, it’d be great to get back in the classroom this semester and have contact with our players. It’s about making sure they’re in a safe and conducive environment, and then get talking about sports and other activities and trying to get back to a normal life.”

As 2020 has shown, even the best laid plans can topple pretty quickly. So, while these plans for December practices look good in July, coaches also are aware these dates are still subject to change based on local health guidelines, as they saw for summer camps.

If the restrictions on schools continued deeper into the school year, Ortiz said they would need a minimum of two weeks to prepare for a season. If the shutdowns pushed back or canceled games on San Clemente’s schedule, Ortiz would want six regular-season games to salvage a legitimate season. Ortiz said potential alternate plans of only playing league games would hurt a team like the Tritons, who only have three South Coast League games this season.

As it stands now, San Clemente’s schedule has already changed, in addition to the actual dates.

CIF-SS’ calendar revision set off a domino effect that saw scheduled nonleague games for school after school eliminated. The revision removed “Week 0” from this football season, which was the week of the season-opening Oceanside game. This meant that San Clemente now needed to fill its Week 7 bye week to get a full 10-game schedule.

As football coaches scrambled to fill their new schedule gaps, they took to Twitter as a weeklong social media frenzy ensued, with coaches, administrators, media members and players sharing their schedules and trying to fit together puzzle pieces. The Tritons found their fit, as Westlake High School agreed to a Week 7 visit to San Clemente.

“It’s adapting to the new normal,” Ortiz said. “In the past, most guys would send an email or post on the CIF website. Because of the urgency of the situation, it shows how times have changed. I only had to find one, but you’re helping other coaches find games. I don’t care who you are, our goal is to get everyone playing.”

Until schedules are set and green lights are given to resume, Ortiz’s task is to keep his players and staff sharp. As has been the case through the summer, Zoom calls will continue to be the medium of choice to communicate with players and coaches.

Ortiz is trying to shake up the Zoom calls for the players with a series of special guests, including Triton football alumni Sam Darnold of the New York Jets and Sean Harlow of the Atlanta Falcons.

“We’re trying to emphasize life-learning skills,” Ortiz said. “Not as much X’s and O’s. It’s keeping engaged with the kids.”

While NCAA recruiting has been frozen due to the coronavirus, Ortiz is still trying to get his players’ names out there to college coaches, especially with some players being underrecruited due to the circumstances of the day.

Season preparations will continue at San Clemente as the waiting game pushes on.