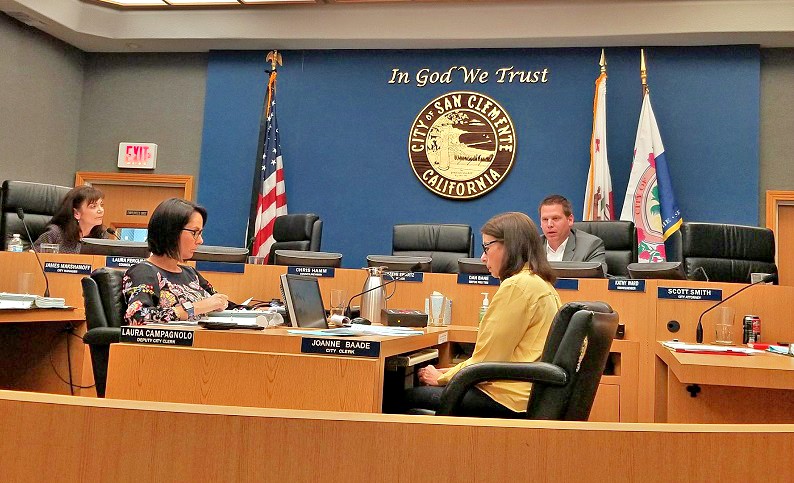 Councilmember Kathy Ward wrote an email to the San Clemente Times Thursday evening, June 20, stating her comments on the police services contract that went without approval at the June 18 Council meeting.

Ward said, “A budget is a process over many months and the process is fundamentally the most important thing to getting a good vote. A council member vote should be based on what the council said during this process and not be reactionary.”

She continued, “Our council approved a budget at our last council meeting and all that remained this most recent meeting was to ratify our sheriff’s contract which added two deputies and a full-time Crime Prevention Specialist from our approved budget.

“A council member wanted to completely change our budget after approving it two weeks ago and cut 5% across the board of all city departments and make this motion during a vote on the sheriff’s budget. That is why I chose not to participate.

“If a council member wants to consider something during a budget, it should be at the beginning of the process or at least during it, but not after the fact as in this case. Our budget for 2019/2020 has been set and it was agreed upon by the entire council.

“Our city has a long-term financial plan that we follow that protects our city from budget short-falls and plans for the future so city services can be protected during downturns in the economy. Prior council members have responsibly adhered to this plan and it has served our city well and maintained San Clemente’s AAA credit rating.

“When I ran for office, I promised the people of San Clemente that I would bring forth responsible budgets and protect that credit rating,” Ward said.

At the city council meeting Mayor Pro Tem Dan Bane said he appreciated what Councilwoman Ferguson had done, but he was going to look like the bad guy when he said, “We’ve gone through a budget cycle this entire year. We fought hard for the two deputies we got, and I think it’s unfair of us at this point to be changing the game on the rest of our council members. We fought for the deputies, the two we got and the CPS.”

Bane addressed a resident activist in the audience, Brad Malamud, who has been vocal to Council about making budget cuts to fund additional Sheriff’s deputies.

“You’ve told me to go cut 5% across the board,” said Bane. “I’ve looked at that. I’ve looked at- we’re going to have to cut staff. I’ve asked all of the staff members- who can you lose? I asked Adam Atamian that today. You keep saying we have too many code compliance officers. He totally disagrees with you. I haven’t done the analysis of our staff. I haven’t asked anyone to do the analysis of our staff. I have no idea what 5% cuts is going to do to all of our departments. I do know that we have a police contract here that I thought was a good move…” Bane said.

The city of San Clemente faces losing its police services with the Orange County Sheriff’s Department as of July 1 if the City Council does not come together to resolve its issues over approving its Fiscal Year 2019-20 Police Services Contract, according to Sheriff’s officials.

The drama ensued after Ferguson made a motion to adopt the Fiscal Year 2019-20 Police Services Contract with a modification to the staff recommendation for the contract.

“The first item, to direct the city manager to return in August with 5% cuts across the board . . .” Ferguson said before Ward interrupted her.

“We already talked about this,” Ward said. “We were looking at a budget that we were going to approve. . . . If it’s going to be changed, we wait for a full council.”

Ferguson responded, “We approved the budget already. This is direction to the city manager to make 5% cuts across the board in departments.”

Ward stood up and said, “Forget it, I’m not participating. Is that what you want?”

Mayor Pro Tem Dan Bane replied, “I want you to participate, so let her make the motion.”

Ferguson continued reading the staff recommendation for the police services contract, but to no avail. The city council lacked quorum as Councilmember Chris Hamm had left the meeting earlier, stating he had to return to work.

Before Hamm left, he expressed his support for the police services contract and told Bane he supported him next year in looking at other ways to add additional deputies.

Ward had not responded for comment to the SC Times at press time.

After hearing the news that the council failed to act on approval of the Fiscal Year 2019-20 contract for police services, OCSD Sheriff-Coroner Don Barnes, wrote a letter June 19 to City Manager James Makshanoff, expressing the department’s disappointment.

“As a result of the council’s inaction last evening, I am obligated to inform you that the Sheriff is under no legal obligation to continue providing law enforcement services outside of a contract,” Barnes wrote.

The city’s contract with OCSD ends June 30. While the contract does allow for a one-time extension, Barnes stated that as of June 19, without a contract,  San Clemente will not have police services provided by the Sheriff effective July 1.

“For the past 26 years, we have served the residents of San Clemente with exceptional law enforcement services, and I have continued to do so through personnel reductions while, during the same time period, the city’s population has increased significantly. Put another way, our personnel have carried the burden of doing more with less, and did so in the high-risk environment of protecting the public,” Barnes wrote.

Barnes strongly recommended the city council reconvene before the end of the month and reconsider the issue, before the contract expires.

“It is important that I stress to you my support for the addition of two deputy sheriffs, as currently recommended by staff,” the sheriff-coroner said.

OCSD staff plans to conduct a personnel staffing and allocation analysis to determine additional staffing needs, if any, and give it to the council by the end of the year.

“This will allow you and your staff time to plan for the Fiscal Year 2020-21 Budget in the event additional staffing recommendation are to be implemented,” Barnes wrote, concluding the letter. “It has been our honor to serve the residents of San Clemente… and it would remain our privilege to do so.”