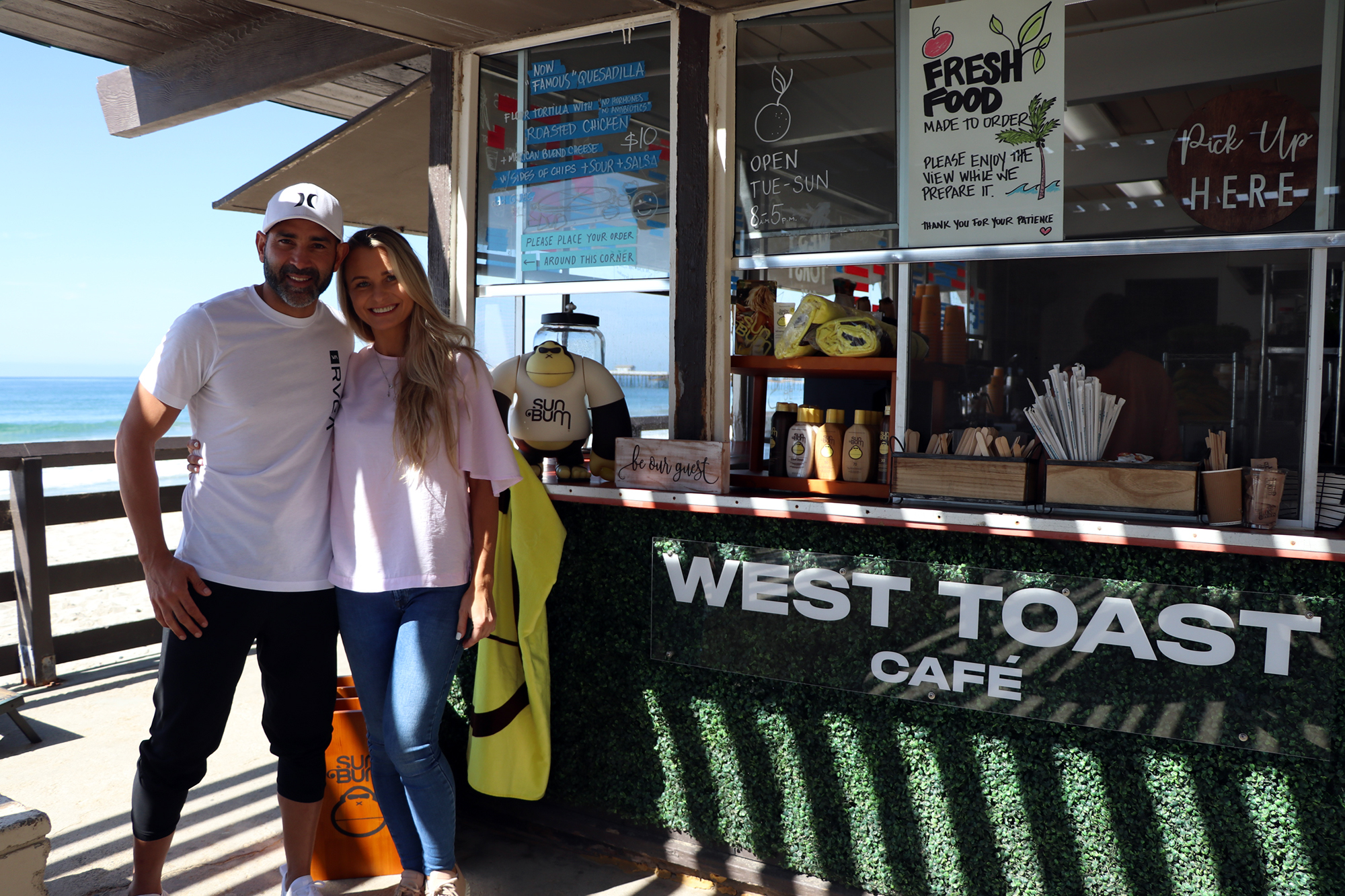 Every time Stravinskaite and her daughter would hear a train travel through town, they’d make a wish.

For Stravinskaite, who would often pass by the T-Street concession stand only to see it closed much of the time, her wish was to one day operate the beachside shack.

“The first time I saw the concession stand, I fell in love with the idea of opening a restaurant here, serving healthy, organic food,” Stravinskaite recalled while seated at the snack bar tables. She later added, “My wish was to get a concession stand.”

That wish would eventually come true, taking less than a year from the time she and her husband Tulio Poller had relocated their family from Florida to San Clemente.

“After nine months of dreaming and consistently contacting the city to get the place, we got it by the end of June,” she gleefully explained. “This train is magical for me and made my dream come true.”

With those dreams turning into a reality, the couple in September opened up West Toast Café at the T-Street stand, where they’ve been serving organic-based, nutritious foods for breakfast and lunch.

“Thinking about the lifestyle here on the beach, the (Beach) Trail, a lot of people here take care of themselves and their bodies, their minds,” Poller said. “That’s why we created a menu based on organic ingredients.”

West Toast’s menu is a stark departure from the previous treats offered at the T-Street stand since the 1990s. Up until this past summer, the Wilson family operated the snack shack, which featured traditional beach-going eats such as burgers, hot dogs and ice cream.

The city ended its contract with the Wilson family just before the Fourth of July, the Orange County Register previously reported. The city’s decision was part of an effort to increase revenue at the T-Street stand, as well as snack bars at the Richard T. Steed Memorial Park, North Beach and the San Clemente Pier.

This past May, the city council unanimously voted to have the city’s parks department take over food service operations at Steed Park, renegotiate the terms of a five-year contract with the operator of the Pier Bait & Tackle Shop, and solicit local restaurants to operate pop-up stands at T-Street and North Beach.

With the contract for the stand up for grabs, Stravinskaite and Poller jumped on the opportunity, securing a limited-term lease agreement through March 2021.

“I contacted the city at that moment they told me the current operator had no more contract, and they were willing to do a bid to fill up the space,” said Stravinskaite.

According to Jonathan Lightfoot, the city’s economic development officer, the city will formally solicit requests for proposals (RFP) to operate the T-Street and North Beach stands by the end of the year.

“We hope that Eli still plans to be a participant of that process and have been very happy with the good work she has put in to clean up and modernize the T-street stand,” Lightfoot said in an email.

The new concessionaires didn’t waste any time making the space their own, and quickly got the stand up and running after five weeks. All the while, Stravinskaite was also pregnant with their fourth child, who was born Sept. 21.

“She’s a hard worker,” Poller said in admiration of his wife, who returned to work within a few weeks of giving birth.

Since opening, the new coastal café has garnered quite a bit of attention from residents on social media who have raved about West Toast’s menu. Some of the more popular items, Stravinskaite noted, include the acai bowl, smoothies and Green Juice.

But their biggest hit, she noted, is undoubtedly Poller’s avocado toast, which is topped with avocado, tomato, cucumber, chili flakes, micro cilantro greens, sesame seeds and salt. For a few extra dollars, patrons can also add salmon on top.

“We’re very proud of our menu. People really like it,” Stravinskaite said. “The most famous item, I would say, is the avocado toast.”

In Florida, the two had already operated their own businesses. The Lithuanian-born Stravinskaite started a girls’ and women’s swimwear line, while Poller, a native of Venezuela, launched a software company with close friend Adrian Real—West Toast Café’s chef.

For years, the couple would spend family vacations in San Clemente, where Poller would surf while Stravinskaite and the kids enjoyed playing on the beach. Having been attracted to the city for so long, the family relocated here from Miami about a year ago.

When the couple moved to Southern California, they knew they wanted to start a restaurant business. It had also been something Poller and Real had spoken about at length while running their IT consulting firm in Miami.

“Tulio and I always dreamed about having a restaurant; we always talked about it,” Real told San Clemente Times over the phone last week. “The opportunity came; I was very passionate about the food industry.”

Real, who was also born in Venezuela, said that he comes from a family in which food is very important. He noted that some of his best friends are chefs, and that he’s helped them in marketing and collaborating on projects.

Enjoying the culinary arts, Real said he likes to be creative when cooking for himself and friends.

“Cooking at home was a way to create and disconnect, and I’ve always loved to cook. My friends always call me ‘Martha Stewart,’ ” he said, laughing, before also stating that he enjoys opportunities to “gather a good group of friends and cook for them.”

Using that creativity and passion for food, Real—who prides himself on maintaining a healthy lifestyle—is working with his longtime business partner and Stravinskaite to bring their style of healthy cuisine to San Clemente, as well as the town’s surf and yoga communities.

“Now, with this new journey, we have this opportunity to present to the community of San Clemente a healthy approach,” said Real, who will be moving to San Clemente with his wife and two kids in November.

Poller echoed that sentiment, stating, “We don’t have anything premade; everything is fresh.”

That includes one new and creative specialty item that’s not officially on the menu quite yet, but has been met with positive feedback: West Toast’s arepas—a South American dish found in Colombia and Venezuela.

Traditionally, Poller explained, the Venezuelan arepas are white. But at West Toast, the team has put their own spin on things, incorporating a bit of color, as one is made with spinach, another with beets, and the third with carrots.

Poller said he’s looking forward to Real’s move to San Clemente, as the two “have a lot of plans to create different kinds of menus, like a super food for the surfers; going to be for the kids who come here every day to train on the beach.”

According to Poller and Real, they are developing a sort of “surf box” breakfast program for surfers who regularly visit T-Street’s water for morning sessions. The box, Real said, will include nutritious foods to help surfers with performance, as well as provide educational materials on workout recovery and meditation.

“Things they don’t teach at school but we want to share that information with the audience,” Real said.

“We’re very focused on this new generation. San Clemente is a very family-oriented town—the kids, the surfers, the athletes—they understand what nutrients can do for the general health,” Real said.

Stravinskaite further explained that they intend to set up a prepaid or account-based structure for the surf box program, wherein the young surfers can order their box the night before and have the food ready when they get out of the water the following morning.

Other plans for the future include expanding the business to rent surfboards and bikes.

“It was a big success; people really loved it, so we’re going to start doing (it) right now, every Sunday. Yoga in the morning and live music,” Stravinskaite said. “They can have breakfast and listen to music.”

Over the coming weeks, the concessionaires intend to also host a weekly sunset event. Each week, they explained, will be themed, such as Greek, Spanish and Italian nights, and feature a guest chef to prepare the food. There will also be live music, and ideally, cocktails for guests to enjoy.

West Toast Café is open Tuesdays through Sundays, from 8 a.m. to 5 p.m.