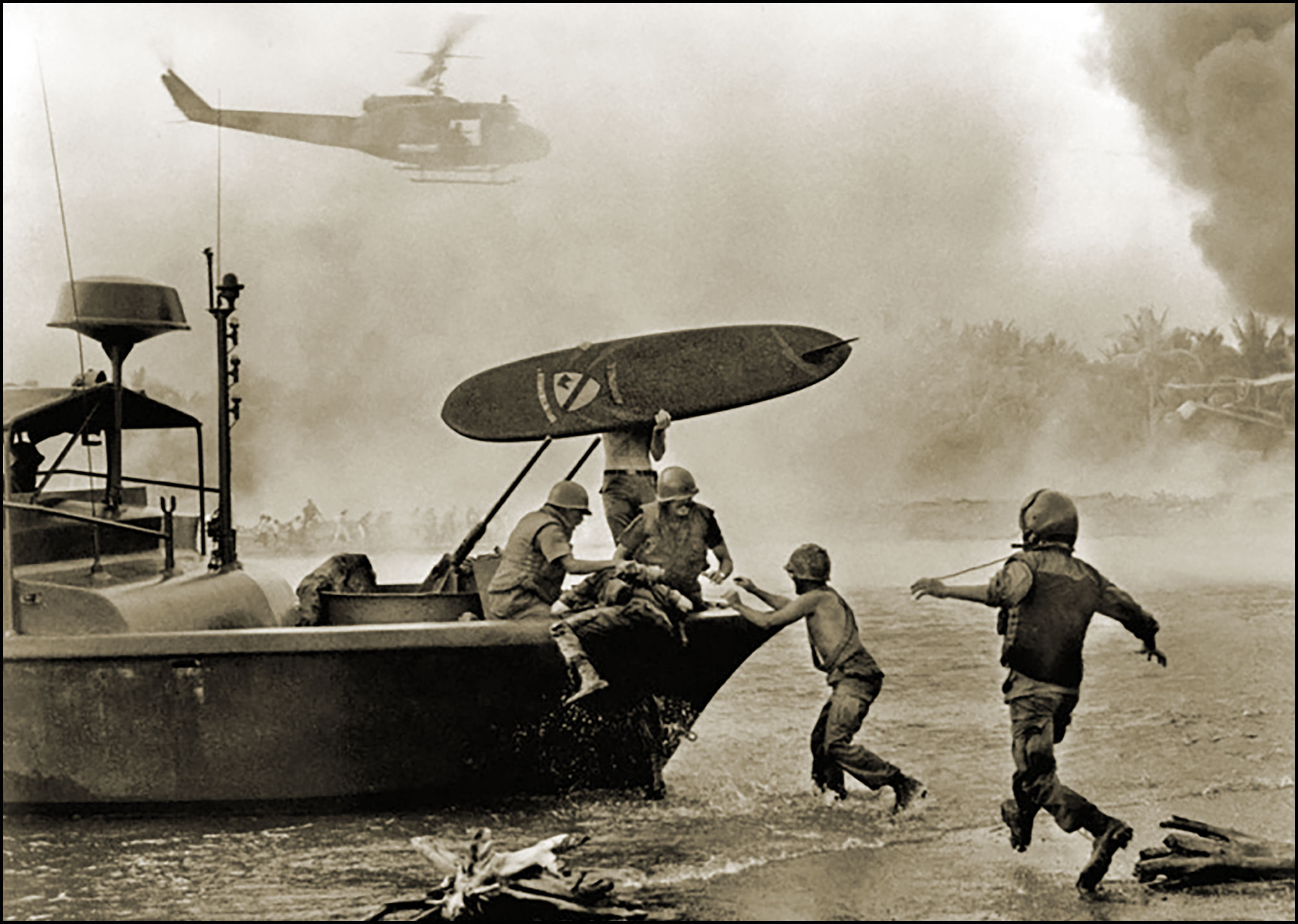 What Makes a Surf Movie?

“You want to surf, soldier? … That’s good, soldier, ’cause you either surf or fight, is that clear?” famously barks Lieutenant Colonel Bill Kilgore (played by Robert Duvall) in the heat of battle in Apocalypse Now.

Originally released in 1979, the whole Apocalypse surfing scene, masterminded by filmmaker Francis Ford Coppola and famously scored to “Flight of the Valkyries,” is worth a watch again if you haven’t seen it in a while. (Of if you’re too young to have ever seen it, give it a search on YouTube.)

As bombs, rockets and artillery fire go up around the soldiers, the object of Kilgore’s desire is a decent left-and-right setup in the heart of Viet Cong country.

For those who are curious, the board in the photo was shaped by Renny Yater. A matching pair of boards were made for the movie. A recreation was on display during the Surfing Heritage and Culture Center’s pre-pandemic exhibit on surfing in the movies.

Last weekend, I got in a debate with a friend about surf movies and the difference between a movie with surfing in it and a bona fide “surf movie”—a movie by and for surfers.

The conversation started with The Endless Summer. When Bruce Brown made the movie in the early 1960s, he most definitely was making a “surf movie.” Made with a budget of only $50,000, and scored by local band The Sandals in a day, the film ended up running for 48 weeks in New York City, smashing national theater attendance records during its 18-month run.

Film critics dubbed Brown “The Bergman of the Boards” and “The Fellini of the Foam” in a nod to his cinematic masterpiece. The U.S. State Department even showed it at the Moscow Film Festival.

So, surf movie—or movie about surfing? My buddy and I decided The Endless Summer was a surf movie first and foremost, based on Brown’s original intent. But other films aren’t as cut and dried.

What about John Milius’s 1978 classic Big Wednesday? Another ode to the Vietnam War, it was a full-on Hollywood production about surfing, yet still inspired a generation.

Then there’s the ’80s cult classic North Shore. It features plenty of notable names from that beautiful neon era, and the storyline is even more relevant today than it was when it was made: kid learns to surf in a wave pool and goes on to compete in the illustrious Pipe Masters. But it has all the telltale gaffes and awkwardness of something only Tinseltown could produce.

Blue Crush in 2002 got much closer to nailing the subject matter and led to a revolution in women’s surfing. Reaching mass audiences around the world, the film, directed by John Stockwell and starring Kate Bosworth, grossed more than $40 million. That’s about $40 million more than the take at a typical surf movie premiere.

And don’t even get me started on the profound impact that Johnny Utah and Point Break have had on my psyche. I still toss around lines from the film as if people have any idea what I’m talking about.

Surf movies will always have a place in my heart, and when we’re allowed to congregate again, I surely can’t wait for a good premiere party with all the friends.

From John Severson’s Pacific Vibrations, to Sonny Miller’s Searching for Tom Curren and pretty much anything Jack McCoy has ever done, I wouldn’t be the surfer I am today without surf movies.

But all those corny Hollywood lines that have engrained themselves in my feeble skull, from Surf Nazis Must Die to Fast Times at Ridgemont High, to that one with Big Z and the surfing penguins, there’s a difference between movies about surfing and surf movies. But there’s definitely room for both.