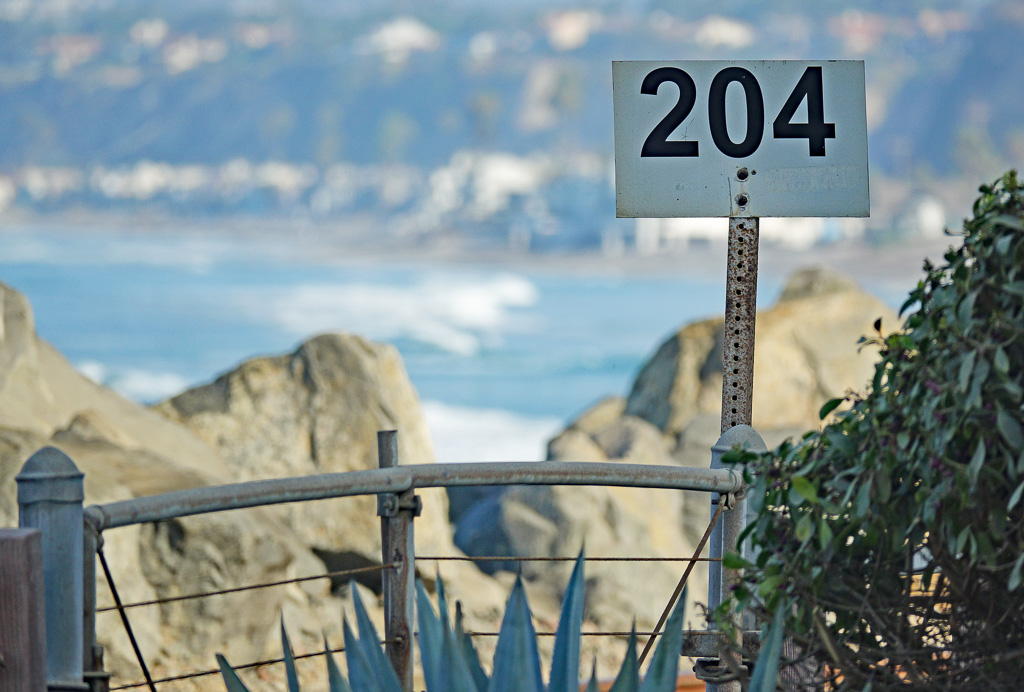 What’s in a name? ‘204’: The Meanings Behind Certain Railroad Markers in San Clemente

I think it’s time we add a fresh new arrow to the sign. Let us proudly proclaim that Barstow is 204 miles from San Clemente.

As local surfers know, we have a pleasant surf spot we call 204, named after a railroad milepost next to a railroad crossing to the beach.

Someone once told me you could trace the tracks back 204 miles to a railway switching station at Barstow.

Milepost (MP) 203 is just up the road from 204. It’s along PCH, between North Beach and Poche Beach.

I decided to try to track down MP Zero.

Online, I looked up driving directions to Barstow, trying to simulate various rail routes from San Clemente via Orange, Fullerton and Los Angeles. All routes came up short of 204 miles.

A milepost expert on a railroad discussion forum online was able to find me the actual 204-mile route.

You have to go up past Los Angeles to Pasadena. Then you head east to San Bernardino and it’s 81.3 miles north from there, counting down to MP Zero, Barstow.

Where but in Barstow can you dine sitting inside McDonald's railroad coaches? Souvenir shops and eateries abound on the site, which serves freeway motorists, tour buses and Greyhound. Photo: Fred Swegles

The railroad marker ‘204’ would seem to be known by few, but it’s actually a milepost that’s 204 miles from Barstow, California, where the main rail yard is located for BSNF. Photo: Fred Swegles

The railroad marker ‘204’ would seem to be known by few, but it’s actually a milepost that’s 204 miles from Barstow, California, where the main rail yard is located for BSNF. Photo: Fred Swegles

Somewhere along this maze of railroad tracks may be a Milepost Zero sign. More likely, it's around the bend in a rail yard crowded with hundreds of freight cars. Photo: Fred Swegles

Arrows displayed at El Rancho Motel in Barstow point to many parts of the world but not to San Clemente, which is 204 railroad miles from the desert community. Photo: Fred Swegles

Upon learning that San Bernardino’s historic railway depot has a terrific railroad museum, I rode Metrolink there July 11 to look for clues.

Metrolink veers off the L.A. line at Orange, accessing San Bernardino via a route that has its own mileage countdown to zero. As we entered San Bernardino’s station, I even saw MP .5 and MP .4. But no MP Zero.

My favorite exhibit in the museum described how, in the 1890s, easterners were lured to buy land in California, paying $3 for an enchanting 166-mile circular train tour of the Promised Land. The highlight was visiting romantic orange groves, breathing in the allure of healthy living symbolized by the citrus industry’s famous colorful California orange crates.

I loved it. And I would gladly have given a dozen oranges for a clue about MP Zero at Barstow.

On July 15, I drove to Barstow to visit its own Western America Railroad Museum, plus the Route 66 Mother Road Museum. Both are lots of fun, located inside a really elegant depot. The railway docents were helpful but had no answer about MP Zero.

Outside, my powerful zoom lens was unable to locate any suspect signs up or down the tracks. I drove my car parallel to the tracks as far as I legally could.

The rail yard, nearby, is such a spaghetti bowl of infrastructure, the elusive MP sign could be anywhere, but nowhere I could access.

Heading home, I drove Historic Route 66 as far as Victorville, stopping at places you could spot a railroad MP sign from the road. The closest sign I found to Barstow was MP 12.

Undaunted, I booked a July 29 seat on Amtrak’s Southwest Chief. It goes 2,265 miles from L.A. to Chicago in 40-plus hours. I would only go as far as Barstow, hoping to glimpse MP Zero as we pulled into the station.

It’s the only eastbound passenger train to Barstow, and, ugh, it arrives at night. I prayed for floodlights.

But alas, MP Zero, if it existed, slipped by me.

After overnighting at the theme-decorated Route 66 Motel, I toured Harvey House, a wonderful restored onetime restaurant/hotel/resort built in 1911. It’s a visitor attraction that occupies the most exquisite section of Barstow’s historic rail depot, which also includes the rail and Route 66 museums.

Elegance like this seemed out of place in a desert. Harvey House, in its day, was a veritable oasis catering to train travelers.

Today it relives the glamor days of train travel through photos, relics, a Fred Harvey menu, even a movie poster for a 1940s Judy Garland musical, “The Harvey Girls.” Watch the trailer on YouTube.

I visited the Sheriff’s Department, to politely ask. Deputies should know mileposts, right? One purpose of MP signs is to pinpoint where to respond to any kind of incident along many miles of RR tracks.

As I asked the receptionist, someone waiting in the lobby overheard my quirky “you’re going to think I’m crazy” disclaimer. She told me she worked at the rail yard and yes, there is a MP Zero.

Invigorated, I messaged BNSF again, asking if the media office could please send me a snapshot or at least confirm existence.

So, I’m pleased to have learned a lot at Barstow’s railroad and Route 66 museums, Harvey House, the NASA exhibit and the Mojave River Valley Museum, plus Barstow’s rich collection of murals, illuminating local history and the desert.

I may even return to Barstow to try to see the Old Woman Meteorite, said to be the second-biggest space rock ever found in the USA. It’s in the Desert Discovery Center, which was supposed to be open but wasn’t when I tried to visit.

I never photographed my MP Zero sign. I came close. There is a RR sign along the tracks as you approach Barstow’s oasis-like palace of a railway station. The sign is the letter D.

If you squint and use your imagination, you can almost conjure up a desert oasis mirage, the D magically rounding off to become a zero.

203: This milepost is visible from PCH, between Poche Beach and North Beach.

204: A milepost at a San Clemente surf spot of the same name, between North Beach and Mariposa Point.

204.3: Painted onto a railroad tie, 3/10 of a mile south of 204. It signifies where a pedestrian ramp from Avenida Mariposa intersects with San Clemente’s beach trail and a RR underpass.

204.8: This number represents the Amtrak/Metrolink stop at the San Clemente Pier.

207: A sign between San Clemente State Beach and Cotton’s Point.

207.4: The Orange County/San Diego County line. A RR sign proclaims it, next to a bridge known as Upper Trestles.

Why mileposts exist: They serve as a railroad map, specifying locations of infrastructures. They show train crews exactly where they are on a remote section of track, helping railroad maintenance and public safety personnel pinpoint where to respond to needs or incidents.

Poche: Named for an old former sign along the railroad. Spanish dictionaries do not list any noun of that spelling. It could be a place name or human name. It also could be the command version of the verb “pochar,” meaning to fry gently.

North Beach: The first time I heard “North Beach” was in an early 1970s conversation with San Clemente’s then City Manager Ken Carr. I thought, what a dull name for a beach.

Mariposa: Named for the street that leads to this beach.

Second Spot: The second stretch of sand north of the pier, just past Lifeguard Headquarters.

Cropley’s: A surf break in front of a hamburger stand operated for decades by Richard Cropley and family.

T-Street: The intersection of Avenida Esplanade with Paseo de Cristobal. It forms a T.

Beach house: Just south of the T-Street Overpass. A building once stood there.

The Hole: You used to be able to hike through a rustic canyon south of T-Street to surf this remote stretch of beach.

Lasuen: A street atop the bluff, closest to the path to the beach, is named for Fermin Lasuen, a Franciscan missionary associate of California founder Junipero Serra.

Lost Winds: Same beach, a take-off on the name ‘Lasuen.’ A photographer is said to have sent a photo to a surf magazine and wanted to keep the location secret, so called it Lost Winds.

Riviera: Named for a neighborhood.

Adoptable Pet of the Week: Belle