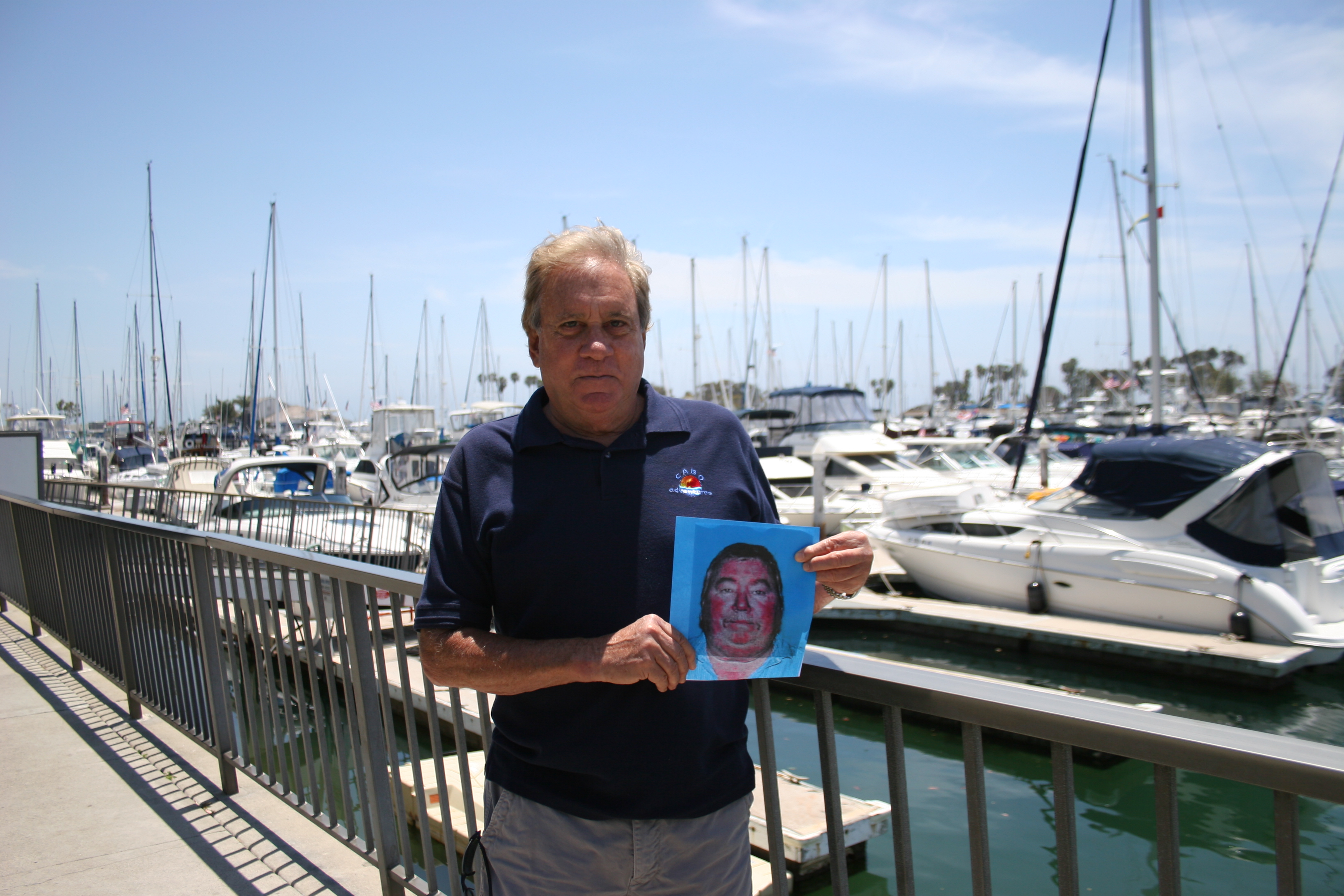 Richard Carnesale of Monarch Beach holds a picture of Ed Fitzgerald near the Dana Point Harbor office where Fitzgerald once ran his yacht brokerage business. Carnesale is one of many who say Fitzgerald stole money from them. As the three-year anniversary of Fitzgerald’s disappearance approaches, charges have yet to be filed. Photo by Andrea Swayne

This Dana Island Yachts sign that was displayed on the Dana Point Harbor building where Ed Fitzgerald ran his business was replaced with a “Space Available” sign shortly after his 2009 disappearance. The space has yet to be re-rented and Fitzgerald’s whereabouts remains a mystery. Photo by Tom Blake

The article reported that according to Orange County Sheriff’s Department spokesman Jim Amormino, Fitzgerald, a Laguna Beach resident, was wanted for questioning after more than 20 victims told authorities that more than $200,000 was missing from bank accounts and that he hadn’t been seen or heard from in a week.

“This could be just the tip of the iceberg,” Amormino said. “The money lost could be in the millions. There are 20 victims that we know of, but they keep coming forward. Some of the accusations against Fitzgerald include what might be a Ponzi scheme.”

Fitzgerald was accused of a scheme involving short-term yacht sales investments with the promise of quick returns and bilking boaters out of money paid up front for boat slip rentals.

As the Sheriff’s investigation continued, estimates emerged that as much as $3 million could be in question with as many as 40 people or more affected.

Fitzgerald’s disappearance appeared to be voluntary. Shortly after he departed, he mailed letters to Dana Island Yachts salesmen to whom he owed money and also to friends, claiming he hadn’t done anything illegal and didn’t intentionally hurt anybody. The letters were postmarked in San Diego.

“I just wanted to tell you guys, don’t believe everything you’ve read in the papers and online. Most of these people knew exactly what I was doing with their money…,” Fitzgerald said in one letter.

In early 2011, the Sheriff’s Department concluded their year-and-a-half-long investigation and turned the case over to the Orange County District Attorney’s office.

In the summer of 2011, some reported having received letters from Fitzgerald, ostensibly seeking investment money for a hot dog stand in Hawaii. That was the last known communication from him.

As the three-year anniversary of Fitzgerald’s disappearance approaches, many who say he stole their money remain frustrated, wondering why no arrest has been made.

Among the victims is Richard Carnesale of Monarch Beach, who said he is owed $40,000 by Fitzgerald.

“I was acquainted with Ed Fitzgerald for 28 years. I was a customer, employee of Dana Island Yachts, charter captain and did things with him socially. At times, I questioned his ethics but never to the point of suspecting him capable of running a Ponzi scheme and cheating so many who considered him a friend,” Carnesale said. “The DA has failed to issue a warrant for Ed’s arrest. I am not sure why this is taking so long.”

Brad Rambo of San Clemente said he sold a boat through Fitzgerald’s company and on May 14, 2009, the $85,000 check he received from Fitzgerald bounced.

According to Rambo, when he asked about the bad check, Fitzgerald told him it had been inadvertently written on the wrong account and that he’d pay Rambo $85,000 the following week, plus $2,500 for the inconvenience. When Rambo returned to collect the check, Fitzgerald had disappeared. Rambo said he is not only out the money, but his boat as well, and he had believed the proceeds from the boat sale were safe in an escrow account.

“I am amazed the District Attorney has done nothing,” Rambo said. “Since the get go, I asked if the DA could follow Ed’s bank accounts. They said they couldn’t. Now, he’s probably spent all of our money.”

Former Dana Island Yachts employee Susan Hickok, who lives in San Juan Capistrano and works in Dana Point, said, “There were many different ways he (Fitzgerald) affected me personally. The worst was my being ‘guilty by association.’ That made it extremely difficult to find a job. No one wanted to hire me.”

“I took a major cut in pay to get hired. I am still having difficulty within the new job because of repercussions and preconceptions with former employees and clients. It’s a small town, people talk, and that hurts too. Others in the office have been hurt as well.”

Don Jones, from Cardiff by the Sea, has heard nothing from the authorities. He and his wife paid to rent a boat slip in the Harbor only to learn the money they paid up front didn’t secure them a spot.

“My wife and I decided to join the world of power boaters after sailing since 1985 out of San Diego. We decided to seek a broker out of Dana Point with the goal of obtaining a sublet slip in Dana Point for the new boat,” Jones said.

“Ed had us work with one of his salesmen, who did a great job. We bought a boat located in Portland, Oregon. It arrived on July 4, 2009 in Dana Point Harbor and we were assigned a slip by Ed. All was well until we got the heads up in mid-July that something was fishy.”

“We were out 11 months of pre-paid slip fees, paid to Ed, and the balance of funds owed to us under the escrow account for the boat purchase. All told, we lost approximately $20,000. We filed a report with the Orange County Sheriff’s office, but we’ve had no follow up from them.”

When the District Attorney’s office received the case from the Sheriff’s Department, an attorney was assigned to it. Then, a second attorney took over. By April 2011, a third attorney, Matt Lockhart, had assumed responsibility for the Fitzgerald case. Each had to start over because the case is voluminous and required careful reading, said Lockhart in emails about the case.

“Orange County is plagued by much fraud and cases are constantly pouring into the District Attorney’s Office. The Fitzgerald matter, unfortunately, is just one case among many involving shocking amounts of theft and breaches of trust. As such, the attorneys in the Major Fraud Unit have to prioritize their caseloads and work them in an order usually determined by the statute of limitation,” Lockhart wrote in a January 19, 2012 email indicating he anticipated charges being filed within the following two weeks.

At least two more follow up emails were answered by Lockhart between January and June of 2012 indicating that he expected the filing of charges to be imminent.

Lockhart was transferred from the Major Fraud Unit last September to another assignment but said, in other email correspondence, that he knew the victims in the Fitzgerald matter were frustrated and therefore took the case with him so a fourth attorney would not have to start over again.

This offers little comfort to the people affected, who say they feel that the longer the delay, the greater the chance there will be little or no money left for them to be repaid.

Four single mothers who said they collectively lost more than $600,000 to Fitzgerald have felt this way since being interviewed back in 2009.

“I am shocked, saddened and dismayed that Ed Fitzgerald isn’t arrested and sentenced long before now,” said Jody Bremer, one of the four women. “This man stole almost $3 million dollars from dozens of people and continues to live free, spending our hard-earned money, and possibly designing the same scheme to hurt other people. I check the paper every day, hoping to see a headline that reads: ‘Dana Point Former Boat Owner and Ponzi Schemer Arrested, Found Guilty, Sentenced to Jail.’ Why is this taking so long? It is disgraceful! Where is our justice?”

Farrah Emami, Orange County District Attorney spokeswoman, on July 6, said, “Fraud cases take longer to investigate than other types of cases, due to the large number of possible victims and the vast amount of evidence and reports. We are continuing to review the Fitzgerald case.”

The three-year anniversary of Fitzgerald’s disappearance is July 17.

As of press time on July 11, he remains a free man.