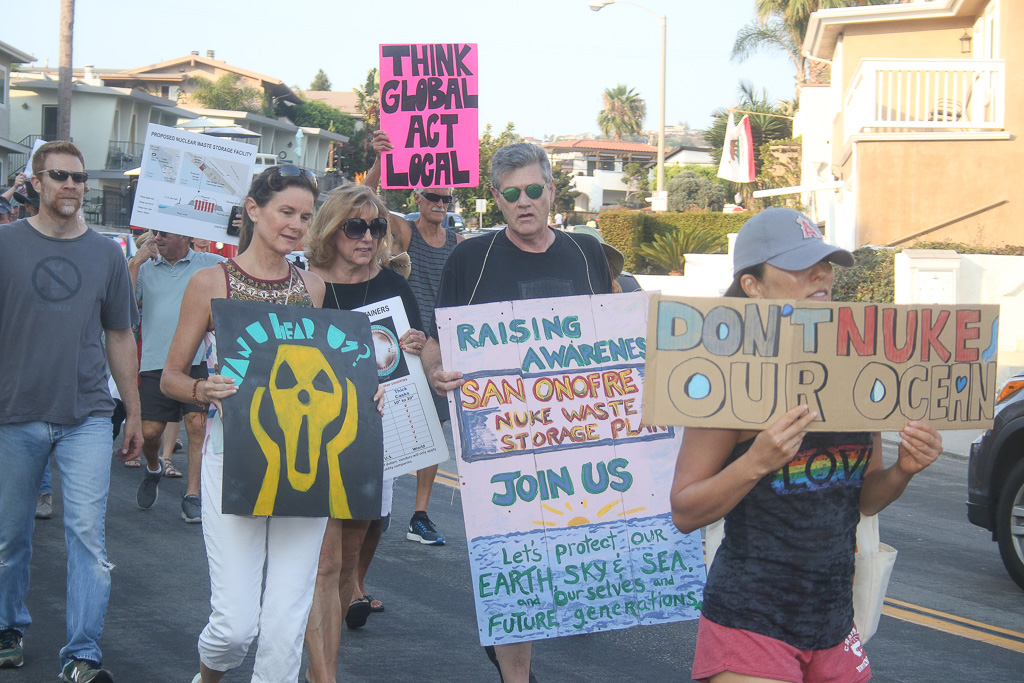 During the public comment section of the Aug. 9 Community Engagement Panel (CEP) meeting in Oceanside, a contractor working with the company Holtec, which is loading the spent nuclear fuel at San Onofre Nuclear Generating Station (SONGS), said an incident occurred that could have caused safety issues at the offline nuclear power plant.

David Fritch, who works on the “fuel loading campaign” managed by Holtec, said that on Aug. 3, one of the canisters being loaded into the cavity enclosure container (CEC) caught the edge of the cylindrical concrete structure and was hanging off the edge.

The “outer ring” of the CEC the cask was hanging from is about 18 feet high and because the crane lowering the canisters was losing its tension on the line, Fritch said it had the potential to drop.

“There is a very snug fit in the CECs, and it is not unusual for it to take the downloading team a few manipulations to get the canister aligned appropriately,” a statement from Southern California Edison (SCE), the majority owner of SONGS, stated.
SCE provides oversight to these procedures.

The canisters, which weigh more than 50 tons, are built to withstand a 25-foot drop, according to SCE, but that didn’t ease many people’s fears after Fritch’s statements.

Edison wouldn’t comment on which company employs Fritch, but Tom Palmisano, SCE’s vice president of decommissioning and chief nuclear officer, said during the CEP meeting that Fritch would not face retaliation, after Fritch said “I’m not sure if I’ll have a job after saying this” during public comment.

Fritch said he is a safety inspector tasked with Occupational Safety and Health Administration (OSHA) regulation oversight, and that he was deeply concerned with a lack of protocol observed during the loading process.

“Southern California Edison has directed its contractor, Holtec, to take corrective actions, including additional training, after evaluating performance errors discovered during the loading of a spent nuclear fuel canister on Aug. 3 into dry cask storage at the San Onofre nuclear plant,” according to a statement from SCE public relations officials.  “At no point during this incident was there a risk to employee(s) or public safety, and immediate lessons learned have already been integrated in our processes.”

The incident drew a frenzy from nonprofit organizations and activists dedicated to investigating activity at SONGS. Citizens Oversight Projects sent out a press release on Tuesday, Aug. 14, calling for an immediate safety review.

Gary Lanthrum, a former liaison to Yucca Mountain, spoke about the ways to transfer spent nuclear fuel as well as the nuclear energy industry's safety track record during the CEP meeting on Aug. 9 in Oceanside. Photo: Eric Heinz

“The crew performing this work did not initially recognize that the canister had stalled while caught on the inner ring; however, SCE’s oversight team determined the canister was not sitting properly, and the canister was repositioned and safely placed on the bottom of the CEC,” the statement read.

SCE also stated it has directed Holtec inspect the incident with the fuel-handling and downloading teams and “discuss lessons learned regarding the potential for the canister to become wedged in the process of lowering the canisters into the storage facility prior to loading the next canister.”
“Additional actions and training were added to the loading processes, which is a part of our ongoing efforts to continuously improve our work practices,” SCE’s statement read. “We do this routinely to ensure we are continuously evaluating our performance, communicating with the crews, and incorporating best practices.”

SCE also stated it would discuss performance concerns with the Nuclear Regulatory Commission.
Through third-party communications, the San Clemente Times was unable to reach Fritch for comment as of Wednesday, Aug. 15.

Real-time data provided by radiation monitoring is something people have demanded since the spent nuclear fuel storage process began. Although SCE has safety monitors to gauge radiation levels, the data is not immediately available to the public.

San Clemente City Councilmember Steve Swartz said he wanted an update and a plan of action to strategize this effort at the next CEP meeting.

There will also be a special CEP meeting, likely in October, to overview the extreme situations of danger that come with storing spent nuclear fuel.

The CEP meeting covered a multitude of topics, including ways that spent fuel could be transferred from SONGS to a temporary or permanent storage facility when one is available—as federal law does not permit temporary storage at this time. To view the meeting in its entirety, click here.