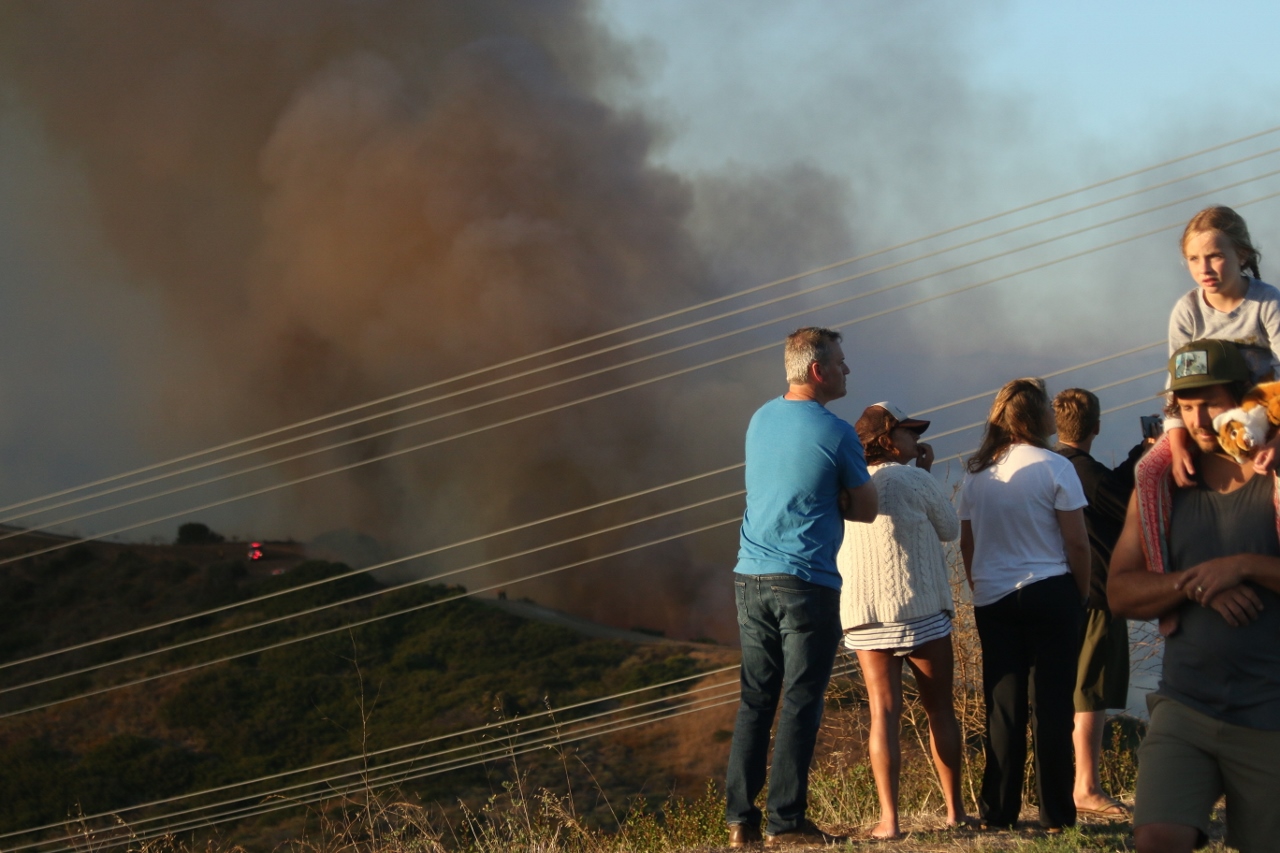 A wildland fire grew to 400 acres by 8:20 p.m. on Wednesday, June 28, on the north end of Camp Pendleton, just south of San Clemente. Firefighters will monitor the blaze throughout the night, and no evacuations have been ordered, according to OCFA. Photo: Jake Howard

Smoke had darkened much of the San Clemente sky on Wednesday, June 28. Photo: Eric Heinz

The billowing smoke could be seen for miles from Camp Pendleton on Wednesday, June 28. Photo: Courtesy of Danny Ritz

The billowing smoke could be seen for miles from Camp Pendleton on Wednesday, June 28. Photo: Courtesy of Frank Brennan.

Smoke had darkened much of the San Clemente sky on Wednesday, June 28. Photo: Eric Heinz

People by the hundreds came out to witness the wildland fire on Camp Pendleton from a safe distance in San Clemente on Wednesday, June 28. Photo: Eric Heinz

Fire on Camp Pendleton property is seen closing in on power lines on Wednesday, June 28. OCFA officials said SDG&E will monitor them to make sure they don't become a threat. Photo: Eric Heinz

A wildland fire broke out in June in southern San Clemente. Photo: File

On Thursday, June 29, city of San Clemente officials said the wildland fire that grew rapidly south of San Clemente the day before had reached a size of 700 acres during the night.

In a press release, city officials said firefighters have contained 10 percent of the fire, but 80 acres had burned in San Clemente. No evacuations have been mandated,  and Orange County Fire Authority officials expect to have full containment on the fire by Friday. No injuries have been reported from the fire.

“There is an area near Avenida Fabricante that OCFA is paying close attention to, but for the most part the fire is burning on itself,” the release stated.

Firefighters closed portions of south La Pata near the fire on Wednesday night in order to make easy passage for fire engines and create space for aircraft to refill water and fire suppression materials.

“The OCFA expects that the businesses at the end of Avenida Fabricante will open later this morning,” the release stated.

South Coast Air Quality Management District issued a smoke advisory on Thursday that will be in effect until Friday morning. Southern winds are blowing the smoke from the fire toward Orange County. People with respiratory or heart diseases should take extra caution, the release stated.

At a rapid pace, a wildland fire spread to 250-300 acres large, as of 8:20 p.m., in a matter of a few hours on Wednesday, June 28, adjacent to the southernmost parts of San Clemente. The fire is currently burning only on Camp Pendleton property and has not reached Orange County.

Orange County Fire Authority spokesperson Larry Kurtz told the San Clemente Times that the fire had stopped moving west as rapidly as it had been earlier in the day. Kurtz said there have been no evacuations ordered at this time, and crews will monitor the fire throughout the night.

At 10:14 p.m., OCFA officials said the fire had been stopped from moving in the direction of homes in San Clemente.

Camp Pendleton firefighters, Cal Fire, the U.S. Forest Service and Orange County Fire Authority sent a fleet of suppression units, engines, areal support and the Forest Service will have a helicopter flying at night, according to posts on Twitter.

About 350 firefighters were on scene at 8:20 p.m., Kurtz said, and the power lines that were in danger of catching on fire are being monitored by San Deigo Gas and Electric.

Hundreds of people near the canyons on the south end of San Clemente came out to witness the inferno, as chunks of burned foliage rained from the sky. Smoke from the fire had blocked out a great deal of sunlight, while fire suppression planes dropped retardant on the flames.

At about 5:30 p.m., people began posting photos and videos of the fire. Initially, Camp Pendleton officials said the fire was about 10 to 15 acres. That changed in the following two hours when the Marine base reported it had grown to 250.

OCFA stated just before 8 p.m. that the fire had grown to 400 acres on Twitter, but that was later downgraded to 250 to 300 acres.

Update-Acres Burned 250-300;Unified command with MCP;Forward progression has stopped on the East/West/South;working on north progression

As of 8:15 p.m., no home evacuations had been ordered for the San Clemente area, although flames could be seen less than a quarter mile from neighborhoods.

The cause of the fire has not yet been determined.

Winds may have been a factor in the fire’s rapid growth. Forecasts from Windfinder.com showed gusts of 10 miles per hour, based on the website’s San Clemente State Beach monitor. Kurtz said the fire is not “intense” but is located in a grassy area where it can spread fast.

The San Clemente Times will provide updates throughout the night. For immediate updates, follow us on Twitter at @SCTimesNews.

This is a developing story. We will provide more information when it becomes available.  Article last updated for change in size of the fire, as reported by OCFA.