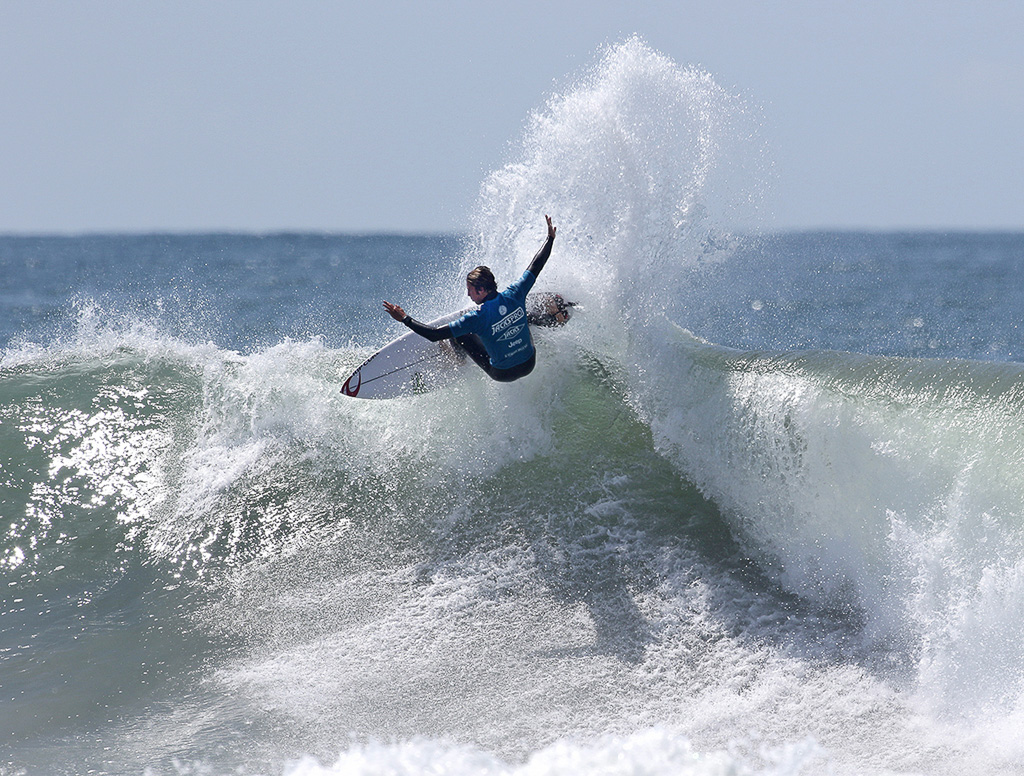 After a brief offseason this winter, the wheels of the World Surf League are grinding back to life. The 2019 season has kicked off with a consistent run of Qualifying Series (QS) contests, and local San Clemente and Dana Point surfers have been able to take full advantage.

Last weekend in Huntington Beach, with pristine springtime conditions and pumping head-high to overhead surf, San Clemente’s Crosby Colapinto got down to business at the Jack’s Surfboards Pro. After a breakout season on the Junior circuit last year, he carried the momentum and confidence with him into Huntington. Surging on the final day, the 17-year-old regular-footer blitzed through five heats on Sunday as he battled to get to the top of the podium.

“I knew there were going to be five heats if I made the final, so I was planning at the beginning of the day to drink water, stay energized and keep calm between heats,” Colapinto said after taking the win, a career highlight for him.

Saving his best for the end of the day, Colapinto went near-perfect in the quarterfinals, posting wave scores of an 8.67 (out of a possible 10) and a 9.60 for a final heat total of 18.27. In the semifinals, he found himself matched up against fellow Lowers regular and former event champion Nate Yeomans. Again, Colapinto put together two solid scores to send the veteran packing and earn his first finals appearance in a QS contest.

Facing Brazil’s Phillippe Chagas in the final, Colapinto had to dig deep to notch his first-ever QS victory. Chagas opened the heat with a stout 7.17. Colapinto countered, smashing two powerful, high-risk maneuvers to earn an 8.50 from the judges. With less than five minutes left in the final, Colapinto extended his lead with a 7.0 ride. Chagas made a last-ditch effort to take the win on a wave in the dying seconds, but he ended up falling.

“You had to be on the best waves,” Colapinto said. “That was one of the best feelings in my life so far, and this smile won’t leave my face for a long time. This is crazy. I was just coming into this event trying to get a couple of points, and to win, it is just a dream. I worked hard for this, and I had all my friends and family down here, so it was a really good moment.”

Colapinto’s older brother, Griffin, is currently preparing for his sophomore season on the WSL’s Championship Tour (CT). In 2018, Griffin finished 18th in the world rankings and is looking to keep the fire burning brightly this year. The first contest of the year, The Quiksilver Pro Gold Coast, kicks off April 3. It will be streamed live on worldsurfleague.com.

And speaking of Australia, Dana Point resident Alessa Quizon is coming off a huge win at the Sydney Women’s Pro. Originally hailing from Oahu, Quizon and her husband, Brazilian pro surfer Caio Ibelli, live in Dana Point and can usually be found down at Salt Creek when they’re not on the road. A former CT surfer, Quizon fell off tour in 2016, but her win at Manly Beach is a strong step forward to getting back to that elite level, where she belongs.

“I can’t really believe this is happening,” said Quizon, who now sits at fourth on the women’s WSL QS ratings. “I was mainly coming to Australia to support my husband and maybe surf a few events and just see how I would do. Then I came here and kept making heats, and then I ended up in the final. I wasn’t really planning on chasing the QS this year and going for re-qualification, but I might have to rethink that. This is all so surreal. I just need to let it all sink in.”

Quizon had reportedly opted to put less pressure on herself this year, focusing more on enjoying her surfing than her competitive results. She may have to change those plans because she could very well see herself back on the CT in 2020.