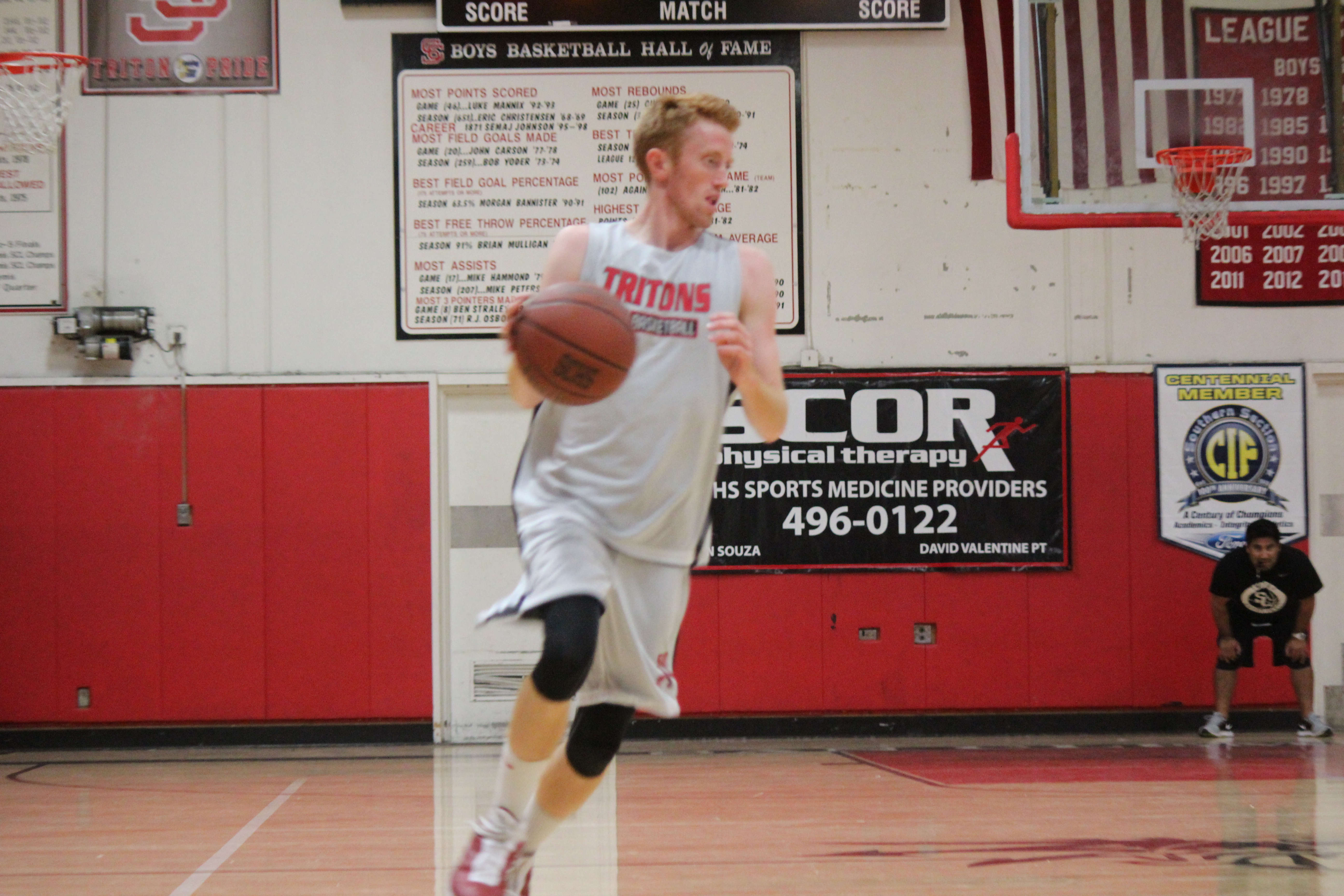 With Darnold Down, Tritons Bench Steps Up

With first place in the South Coast League on the line Feb. 4, the San Clemente boys basketball team leaned heavily on their bench for success.

It was not by choice, but after Tritons standout forward Sam Darnold went down with an apparent back injury just four minutes into the game, it was up to the role players on the bench to fill the void left by the team’s leading scorer.

Senior Scott Herrod and junior Cole Fotheringham were more than willing to accommodate, as the two combined for 36 points and 10 rebounds off the bench in a 74-66 victory over visiting Aliso Niguel.

Aliso Niguel had built an early 11-2 lead in the first quarter when Darnold went up for a rebound, drew contact and landed hard on his back. The senior went straight to the bench and was replaced by Fotheringham.

The Wolverines were led early by senior guard Jared Ryu, who scored 10 first-quarter points. San Clemente was able to cut into the 10-point deficit as a result of Herrod’s shooting from beyond the arc. Herrod hit a last-second 3-pointer in the first to bring San Clemente to within one at 20-19 then scored two more 3-pointers to start the second quarter as part of a 14-0 Tritons run. Herrod scored 10 of his career-high 24 points in the second quarter and San Clemente took a 33-31 lead into the break.

“Every basketball player knows when they’re in the zone and when they are they know to keep shooting I guess. That’s what I kept thinking,” Herrod said of his second quarter effort.

San Clemente built up a 63-50 lead in the fourth quarter but found themselves in foul trouble with five minutes to go. Aliso Niguel, now in the double bonus, attacked the paint and willingly got to the free throw line.

The Wolverines went 13-16 at the charity stripe in the fourth quarter but San Clemente had an answer for every push back. Herrod tacked on eight more points while seniors Nick Crankshaw and Joe Mann, along with Fotheringham, each scored five points in the fourth to maintain the lead. Crankshaw essentially ended the game on a dribble-drive layup through traffic that gave San Clemente a 72-65 advantage with 46 seconds left.

While Darnold going down early threw a wrench in the Tritons game plan, they were still able to play a free flowing, kick and drive style of basketball which has helped them seize the top of the standings.

“With Sam getting hurt, we had to get guys to step up and we had guys step up in droves tonight, it was awesome. That’s how you win right there,” San Clemente head coach Marc Popovich said. “Going forward it puts us in a great position. We’re up two (games) with three to play so if we can keep taking care of business this is going to end in a really fun way for us next week hopefully. We’re in a great spot but we have to keep pushing though.”