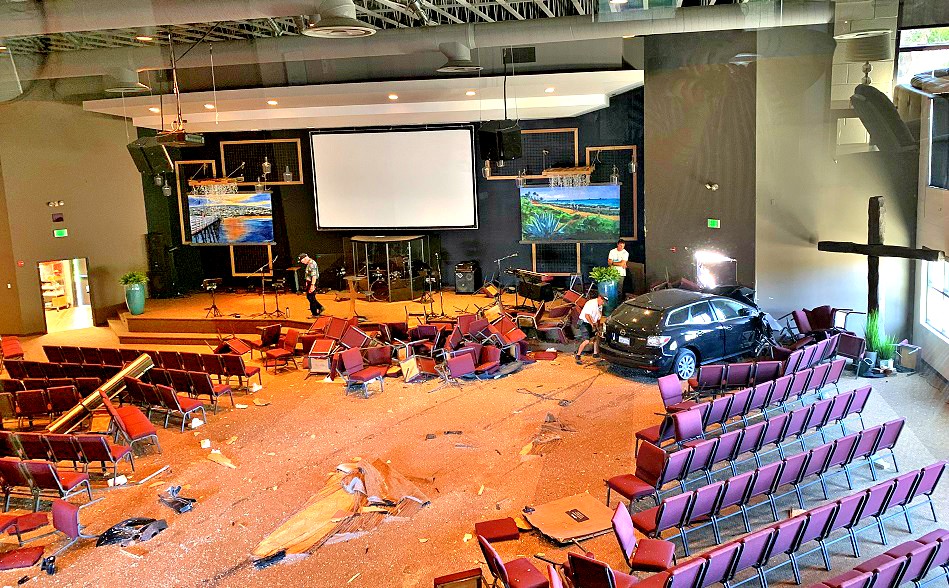 UPDATE: Woman Drives Car through Church, which in Turn Saves her Life

Carrie Braun, public information officer at OCSD, said police will not be releasing the name of the driver, who is an adult female.

“She was not cited or arrested,” Braun said. “It’s not believed at this time that she was under the influence of drugs or alcohol, and investigators will continue to work to determine the cause of the collision,” she said.

The driver suffered only minor scrapes, according to authorities.

A woman reportedly lost control of her car on Tuesday afternoon, August 6, blowing through an intersection and smashing into the front side of a San Clemente church.

Witnesses and church members said the woman was driving her mother’s black Mazda sedan when she sped through a stoplight at the intersection of Calle Amanecer and Avenida La Pata.

She didn’t stop there. Her car continued at unknown high speeds into Heritage Christian Fellowship’s parking lot, blasting through the church’s glass front entrance and into its main lobby, before plowing through a second set of doors and into the church’s main sanctuary.

According to witnesses, the impact sent doors and chairs flying across the room before the car finally came to a stop inside a storage closet on the backside of church.

“The chairs softened the blow and brought it to a stop,” said Roger Gales, senior pastor at Heritage Christian Fellowship, located at 190 Avenida La Pata. “Probably one hundred chairs saved her life,” he said.

A woman reportedly lost control of her car on Tuesday, August 6, blowing through an intersection and smashing into the front side of a San Clemente church. Photo: Courtesy of Heritage Christian Fellowship

A church member stands in the lobby of Heritage Christian Fellowship where a car plowed through the church's main glass entrance, now boarded up. Photo: Cari Hachmann

Roger Gales, senior pastor at Heritage Christian Fellowship, points to where glass shards were embedded into a fixture on the wall after a car plowed through the church's main entrance and sanctuary doors. Photo: Cari Hachmann

Carpet was torn up when the car accelerated into the main worship area of the church. Photo: Cari Hachmann

A look out the window at a pile of chairs, broken and run over by an out of control driver on August 6 at Heritage Christian Fellowship. By: Cari Hachmann

A painting is unscathed after a driver plowed her car into a San Clemente church. Photo: Cari Hachmann

A storage closet was the landing zone for the car that plowed through the church at unknown high speeds. Photo: Cari Hachmann

Eileen James, a volunteer at the church who was in the office at the time, said she thought a bomb went off, or an earthquake.

“We just heard this huge explosion, the whole building shook,” James said. “We opened the office door and looked down the hall and we saw glass everywhere.”

James and other church staff walked into the main sanctuary to find a car idling in a storage closet at the back of worship center.

“The brake lights were on,” said James. “She said that the brakes weren’t working that’s why she didn’t stop. My speculation is that’s not exactly accurate.”

James said the woman was conscious after the accident and was telling witnesses she was okay.

“The police were here lickety split,” she said. “The fire department, everybody showed up.”

The driver, whose airbag deployed, had virtually no injuries, church staff said.

“She had a little piece of glass that had got her arm and that was it,” James said. “It was a miracle. Literally the whole thing was miracle. The fact that just stuff was damaged, that she’s safe, and her coming down Amanecer at the rate she was going, coming across the intersection and not hitting something or anything else—Glory to God! I’ve got goosebumps all over again.”

The front end of the car was completely totaled, but James said it should have been in the shape of a pretzel.

Thankfully, no one at the church was killed or injured, and no services were going on at the time of the accident– around 1:15 p.m.

“If there was, it would have been tragic,” said Pastor Gales.

However, Todd McNeill, a part-time maintenance worker at the church, was in the sanctuary moments before the car exploded into the room.

“He got pulled away regarding a garbage disposal thing in the kitchen,” Gales said. “He could have been killed.”

Gales said the church suffered some structural damage. The car hit the doors to the sanctuary hard enough that one door flew across the open room and hit the back wall. Two support beams were also taken out. Most of the damage, the pastor said, was to the windows, doors, carpet and chairs, which lay in a broken heap on the back lawn, waiting to be sorted through.

After the crash, church members and volunteers got right to work cleaning up the mess with high hopes of being open for Sunday’s services.

On the day following the accident, glass shards were still scattered across the floor as an insurance adjuster met with church leaders to assess the damage.

Gales didn’t have a complete estimate of damages at the time.

“It will be a couple of months of repairing,” he said.

As of press time, Orange County Sheriff’s Department, which responded to the accident, had not returned San Clemente Times’ request for additional information including the woman’s identity, whether or not she was cited and if police were still investigating what lead up to the singular high-speed crash.

“We are just very happy that the woman was not hurt and nobody else was hurt,” Gales said. He showed less concern for the building, constructed almost 20 years ago.

As for the driver, he said, “The church saved her life.”

San Clemente Times will continue to update the story as it unfolds.