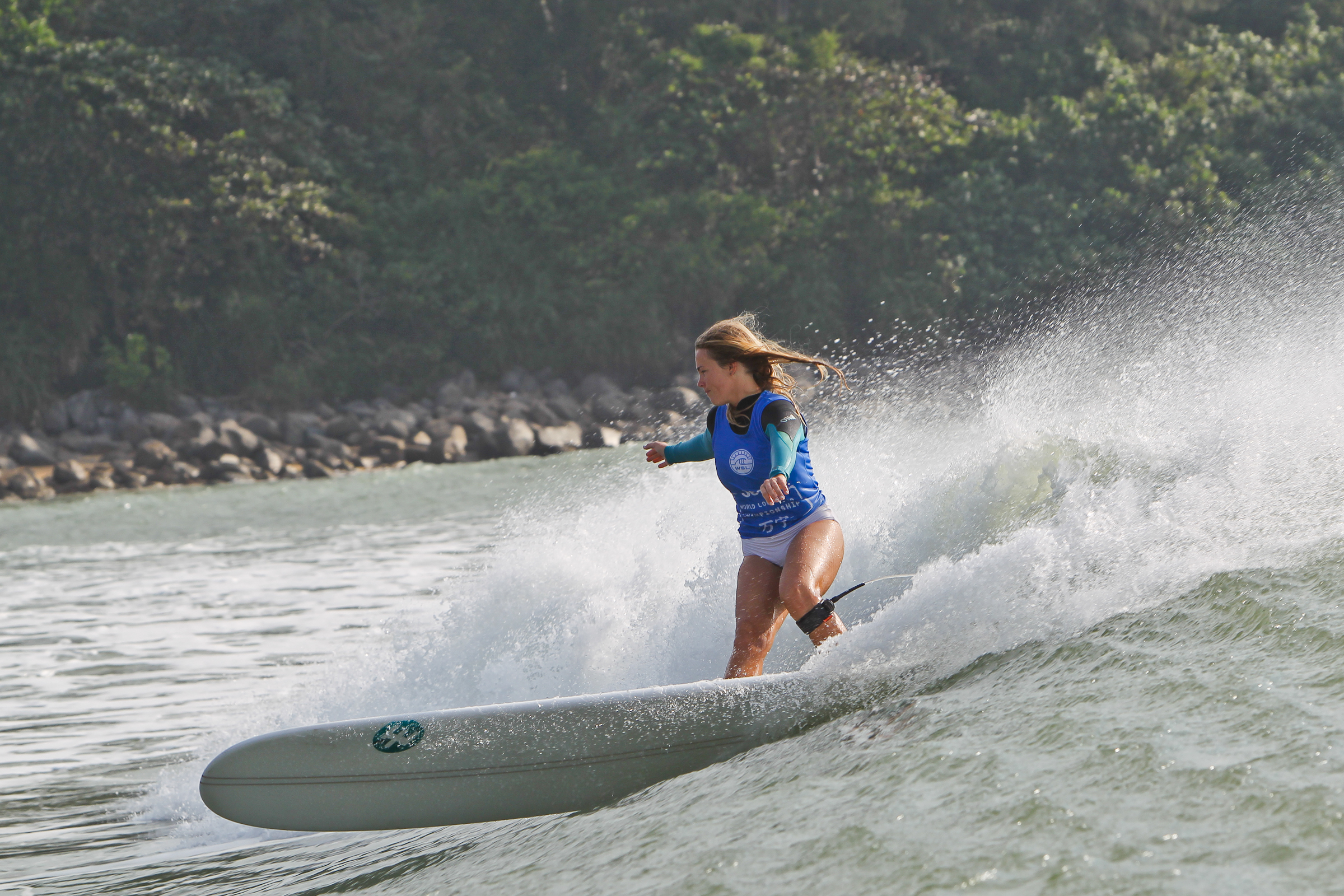 When asked about her surfing aspirations in a 2014 interview, San Clemente’s Tory Gilkerson, then only 20 years old, said, “I would love to be the world champ!”

Competing as a relative dark horse compared to some of the other more established names in the draw, Gilkerson found a consistent rhythm early in the event, and by the time she hit the money rounds, she was firing on all cylinders. En route to the final, she tallied the highest single wave score and highest heat score of the entire contest.

In the final, she found herself matched up against Brazil’s Chloe Calmon. In a somewhat anticlimactic affair, Calmon couldn’t find the waves she was looking for and posted her lowest heat score of the contest, essentially handing the title to Gilkerson, who tallied a 15.93 heat score to win the final.

“This means a lot to me,” said Gilkerson after being chaired up the beach by her friends and countrymen. “It was really stressful out there. I was really stoked to get that 8.00 at the end, it just made it that little bit harder for Chloe.”

“I was so nervous in that heat because I knew how well Tory had been surfing all event,” said Calmon. “I think I let my nerves get the better of me and could not calm myself. I’m upset, but I think I’m hungrier to go and learn from my mistakes and come back next year. I believe everything happens for a reason and obviously today wasn’t meant to be my day.”

For Gilkerson, the win is the result of years of dedication and training.

“I’ve been working on staying calm and smooth and I think that really helped me this year,” she said. “Surfing against the best women longboarders in the world is an honor, and I put a lot of pressure on myself to perform at this level. To win the whole thing is just amazing.”

One of the reasons Gilkerson may have put so much pressure on herself was due to the fact that last year 18-year-old Rachael Tilly, another San Onofre regular, won the title and keeping the world title trophy in San Clemente had a nice ring to it.

“I was here last year when Rachael won and as an American, it was a really proud moment for all of us. I’m so stoked that I can keep it in California for another year; it means the world to me,” said Gilkerson.

Before her win at Riyue Bay, Gilkerson had never advanced out of the quarterfinals of the World Longboard Championship. Previously, she’s won the U.S. national title three times, but this is by far the biggest accomplishment of her budding career. She’s also appeared in a women’s only longboard surf film entitled Say No More. She first started surfing at the age of seven and has noted that her initial motivation was just to keep up with her twin brother in the water. But by the time she was 13, Gilkerson had grown into a seasoned competitor and won her first U.S. title.

Considering that the marquee spot at San Onofre is called Old Man’s and one of the world’s most high performance waves is less than a mile up the beach at Lowers, longboarding may have seemed like an odd choice for a young surf rat in San Clemente, but the style and grace of gliding across a wave face on a big, old log was too fun for her to ignore. So, while her classmates were learning to do airs at T Street, Gilkerson was cross-stepping at The Point. The nostalgia proved inescapable.

“I just love the vibe that comes along with longboarding,” said Gilkerson. “The community is great, with a laid-back feeling out in the water and on the beach. Nose riding is my favorite part of being a longboarder, it’s the best feeling to be perched on the nose.”

Being perched on the nose is pretty sweet, but to be fair, being perched atop the winner’s podium being crowned the best surfer in the world, that has to rank right up there.