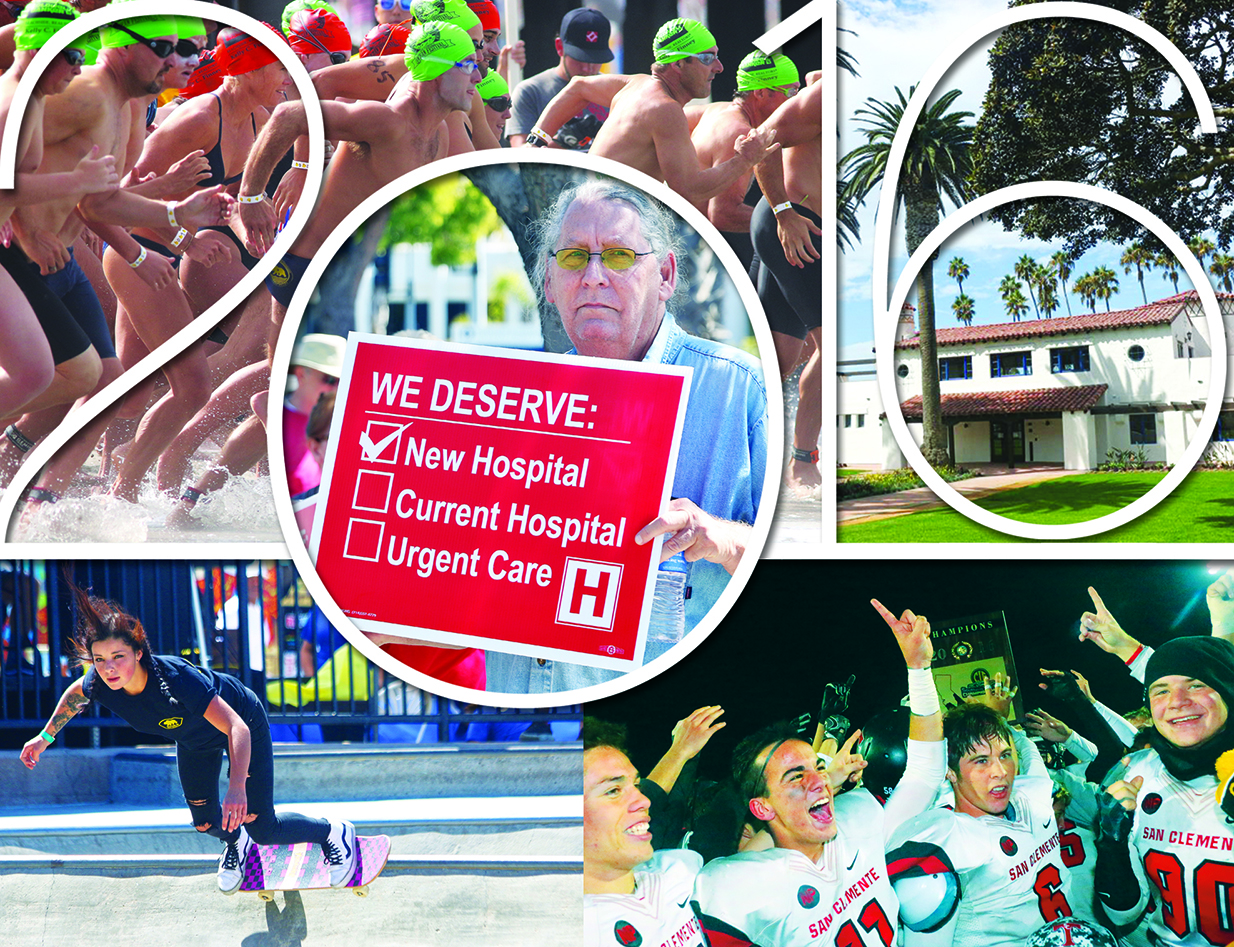 Year in Review: Highlighting Stories that Affected San Clemente Most in 2016

It was a very busy year for many people in San Clemente. As 2016 comes to a close, we take a look back at some of the most read stories and the events that shaped San Clemente this year.

The city was in the midst of battling to keep Saddleback Memorial Medical Center open. Then-Mayor Bob Baker and Councilman Chris Hamm went to speak in front of the California State Legislature to convince them to allow for a free-standing emergency room, which is basically an emergency room that is not attached to a fully functioning hospital.

The amendment didn’t make it past the Assembly or Senate health committees.

Later in the month, the city adopted a zoning amendment requiring the owner of the land, in this case Saddleback, to operate an emergency room.

Saddleback was the only full hospital in San Clemente.

The ordinances to regulate sober living homes and short-term rentals also were manifesting. City Council vigorously debated what should be required from the newly designated establishments to maintain order based on residents’ complaints against them.

City officials also stamped a ban on medical marijuana sales and distribution in an anticipation of the adoption of Prop. 64.

One of the more compelling stories featured in the San Clemente Times in January explored the lives of four bikers who joined a sober riders club. Brotherhood of United Bikers Motorcycle Club-San Clemente continues to help people who are looking for ways to maintain sobriety.
February

One of the windiest storms of the year in San Clemente took place at the start of February, as gusts of up to 45 miles per hour knocked down trees across train tracks, destroyed cars and caused other damage around town.

Capistrano Unified School District students began talking to the Board of Trustees about installing solar panels to offset costs the district uses for electricity and to provide sustainable energy.

Toward the end of the month, the Orange County Transportation Authority (OCTA) announced the closure of two bus routes in San Clemente: the 191 and the 193.

San Clemente Skatepark Coalition (SCSC) was formed and started its campaign to expand the current Ralphs Skate Court, add lighting to it or establish a new skate court. The organization is currently involved with the ongoing Beaches, Parks & Recreation Master Plan with the city of San Clemente.

On March, Saddleback Memorial Medical Center closed its doors. Hospital officials said a fully functioning hospital wasn’t feasible in San Clemente anymore because of changes and advances in the medical industry. Locals argued Saddleback did this to cut costs and increase its bottom line, leaving emergency services hindered in a busy corridor of Interstate 5.

The City Council finalized a long-debated sign ordinance regarding freeway-facing signs and other forms of business identification or advertising. The ordinance allows for “pole signs” along the freeway to continue to stand without being significantly altered, while barring new pole signs from being established.

The Henderson House, which serves people who have mental disabilities, finished a complete makeover for its tenants.

U.S. Rep. Darrell Issa vowed to submit legislation to amend the Nuclear Waste Policy Act in order to move the stored nuclear waste at San Onofre Nuclear Generating Station into interim storage as quickly as possible. He made the promise over a video that was shown at the April Community Engagement Panel meeting.

Saddleback filed its $42.5 million lawsuit against the city for the hospital zoning ordinance.

A mobile home owner in Capistrano Shores filed a lawsuit against the California Coastal Commission regarding his ability to replace his home. He successfully argued later in the year in Orange County Superior Court that he was not adversely affecting the coastal region on which his home is located.

Slyde Handboards based out of San Clemente secured a deal on Shark Tank with guest investor Ashton Kutcher and entrepreneur and “shark” Mark Cuban. The deal was finalized in 2015, but the show didn’t air until April 2016.

Cabrillo Playhouse celebrated its 50th year in its current location. The small theater continues to host a variety of shows and programs.

After what was almost a doomed project, the Estrella Plaza opened a variety of shops after being closed for more than a year due to renovations and upgrades.

San Clemente resident Deb Jackson began a campaign to collect donated walkers and crutches and get them to people who are injured and can’t afford them.

Joyce Hoffman, Bob Yoder and Doris Stephens were all inducted into the San Clemente Sports Wall of Fame.

The OCTA finalized the “quiet trains” project, which significantly lowered the decibel level of noise produced by trains going over crosswalks.

Secure Nuclear Waste, an advocacy ground that meets to combat the storage of spent nuclear fuel at SONGS, hosted more than 100 people at a meeting in Laguna Beach. The group includes then-San Juan Capistrano Mayor Pam Paterson, representatives from watchdog organizations and scientists who are skeptical of the process by which Southern California Edison is planning to harbor the fuel.

San Clemente native John “Spike” Ivins saved four people from drowning off the coast of Catalina Island in June. Three other people, who were sailing with the people saved, died in the incident.

The largest event of the year in San Clemente, Ocean Festival, celebrated its 40th year. Charlie Ware retired as the emcee of the all-day festivities after holding the position since the very first Ocean Festival.

The ballot initiative to establish district elections in San Clemente was verified by the Orange County Registrar of Voters but was held up at the last minute after the City Council ordered a report on the initiative, which delayed it past the final submission date. The ballot can be resubmitted for the 2018 midterm and City Council elections.

Plans to revamp the Miramar Theater were brought forth by the theater’s owners as well as local Wayne Eggleston. The plans that were submitted include turning the old bowling alley into a restaurant center and improving the theater portion to be an event center. They are being considered by city staff at this time.

Avenida La Pata was opened with a ribbon-cutting ceremony that featured dozens of local officials and people who have waited for the connection to San Juan Capistrano to be completed.

Burger Stop, a longtime favorite of locals in San Clemente, closed its doors permanently to make way for the I-5 Pico Corridor Extension, which will be completed sometime in 2017 or early 2018. People lined up all the way around the block to get one last taste.

Pier Pride began its campaign to raise funds for the San Clemente Pier maintenance, as costs can exceed $450,000 on an annual basis. Many high school students came out to light their cell phones as aerial footage was taken by drones.
City Council approved an amendment to the marijuana cultivation ordinance, allowing people to grow up to six plants in their homes, provided that Prop. 64 passed (it did).

Ole Hanson Beach Club reopened after $5.1 million in renovations and upgrades were made over five years. The club’s hours are still being debated by the City Council and the public.

After the closure of the bus routes, the city initiated its Beta Rideshare Test with Lyft, the mobile app transportation company. The Lyft drivers treat the former bus routes in San Clemente before they were discontinued by OCTA.

In the 2016 election, Measure M, which would have directed funds for Capistrano Unified School District building and facility improvement, failed to pass after voters were dissuaded by the $889 million bond principal. Steven Swartz was elected to San Clemente City Council.

To help children who are forced into slavery in Pakistan, Dana Point author Josh McDowell and Heritage Christian Fellowship pastor Roger Gales in San Clemente teamed up to sell McDowell’s extensive collection of worldwide artifacts. The money will be used from the sale to help build another structure for the school in Pakistan.

Three men in the Surf N’ Turf fraud case, who grifted investors of a wave pool and mini golf course, facility were sentenced to a year in jail plus probationary measures and restitution.

Jonathan Hancock finished his 11,000-mile walk across America in San Clemente. Hancock is a combat veteran who served in the Marines during the battle of Ramadi in 2004.