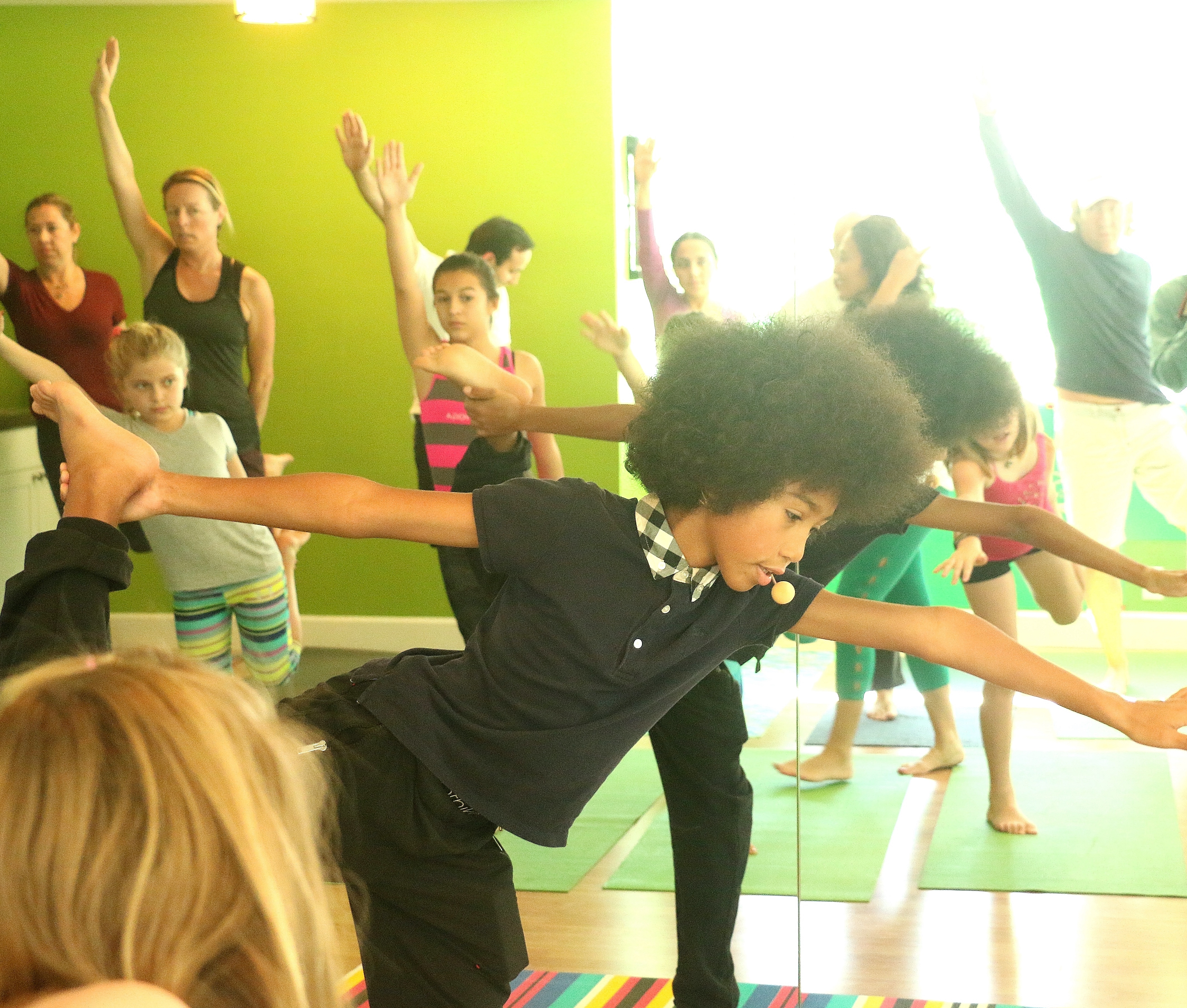 On quest to help people, local child teaches yoga to children and adults

He laid still on a yoga mat in the middle of the center, eyes closed and giving soft directions to his students.

The preteen teacher cultivated a Zen atmosphere by meditative recitation during a recent yoga class.

Larry Tabay Atkins IV, from San Clemente, is 11 years old and already has four different certifications in yoga in different disciplines. He goes by his middle name, Tabay.

“During the summer, my mom gave me the choice to either go to Europe or go to Paris and London,” Tabay said. “Instead, I said I’d like to do a 200-hour teacher training (course). I said so I could help other people, like yoga helped her.”

Sahel Anvarinejad, Tabay’s mother, had cancer a few years ago. She said going through treatment made it difficult to walk, let alone do yoga. As she recovered from treatment, Anvarinejad did her own 200-hour teaching course.

“Emotionally, I just broke down,” Anvarinejad said. “Tabay saw that yoga was helping physically and mentally. So… he said many people have cancer and don’t know how to do yoga, and he said he wanted to share it with as many people as possible and help them heal.”

Anvarinejad said she has been cancer-free for four years. She said she wasn’t surprised that Tabay wanted to do the 200-hour course.

“All throughout the year he had been saying he wanted to do it,” Anvarinejad said. “So I gave him the choice, and I was a little surprised because he loves to travel, but he was very eager to get the certificate.”

Throughout his training, Tabay had to learn a plethora of poses and how to teach the correct form. He said the classes taught him to differentiate between popular poses that are often incorrectly done and how to correct practitioners’ form.

“I’ve been doing yoga for years now, and the training was very intense, but it was worth it,” he said. “We had to answer a lot of questions and do midterms and finals. During the last part of the yoga training, I wasn’t feeling very well. But I didn’t want to quit.”

Anvarinejad said she thinks Tabay is one of—if not, the—youngest yoga instructor in the country based on some research she did online and a news cast on a 12-year-old girl that claimed she was the youngest person. Either way, India’s Shruti Pandey was 6 years old when she started teaching.

“It helps people with so many different things, with stress, work, family, relationships, health and not a lot of people know that,” Anvarinejad said.

Tabay said he wants to teach yoga around the world and develop his own brand or company dedicated to spreading education in yoga. His entrepreneurial spirit is calling him to open as many yoga studios as possible.

“Some of the kids from (his middle school) class have stress from school, and it really helps them deal with that stress,” Tabay said.

Tabay wants to do a third certification in circus yoga, but he said it’s easier to teach children his own age as he can relate to them. On Wednesdays, Tabay hosts a LEGO yoga therapy session, which involves using the toy building blocks as a way to center themselves.

Anvarinejad said in order to keep children focused and involved in yoga, it takes a certain level of skill. The classes must continue to move on different skill sets to address breathing patterns and the different types of stress adults and children deal with.

Bahar Amjaei, Anvarinejad’s close friend, said she’s known Tabay since he was little, and she stuck with his mother through her bout with cancer.

“I’ve never done yoga before and today was my first time,” Amjaei said. “I thought Tabay did a great job, and I’d like to come back again.”

Anvarinejad has a wall full of yoga certifications of her own.

Amjaei said she thinks yoga has brought Tabay and his mother closer together.

Tabay’s father, Larry Atkins III, was a linebacker in the NFL for a few years. Atkins III said he’s noticed his own physical improvements after taking up yoga.

“Being an athlete and going through physical training, when he took me through his sessions, it was up there with some of the toughest things I’ve had to do physically,” Atkins III said. “I was surprised how hard it was, but at the same time (I enjoyed) how good it is for you. I’ve never really been through it before, but after going through it with him I wish it was something I had done a long time ago.”

Atkins III said he tried to keep up as best he could.

“I’m with him 100 percent with him with whatever he wants to do to support him,” Atkins III said. “It’s a great accomplishment, as far as what he’s been doing, and just his heart. He has a genuine heart, and he truly is an amazing kid. I think his energy just lifts everyone up.”

Kim Hanley, a teacher at Vista Del Mar Middle School, has been practicing yoga for 16 years and is Tabay’s English teacher

“It was fun for me to be his student,” Hanley said. “He’s got this peaceful demeanor in class, kind of like (what you’d expect of) a yoga instructor. He’s very calm and focused in class. He does what he needs to do, and he’s a great student.”

Hanley said she learned a couple things about Vinyasa yoga in the class.

John Castillo, who participated in the class on Saturday, said his daughter had been taking classes from care4yoga for years.

“Just realizing every time I do yoga, it makes me feel better, and I’d like to come back,” Castillo said of why he sat in on the class.

Madeline Macchia, a sixth-grader, said the class was fun and exciting.

“I was really excited to see Tabay do all these special things and be recognized for all he has done,” Macchia said. “Every time I come here, I just know that I’m going to be happy for the rest of the day. It helps me think.”