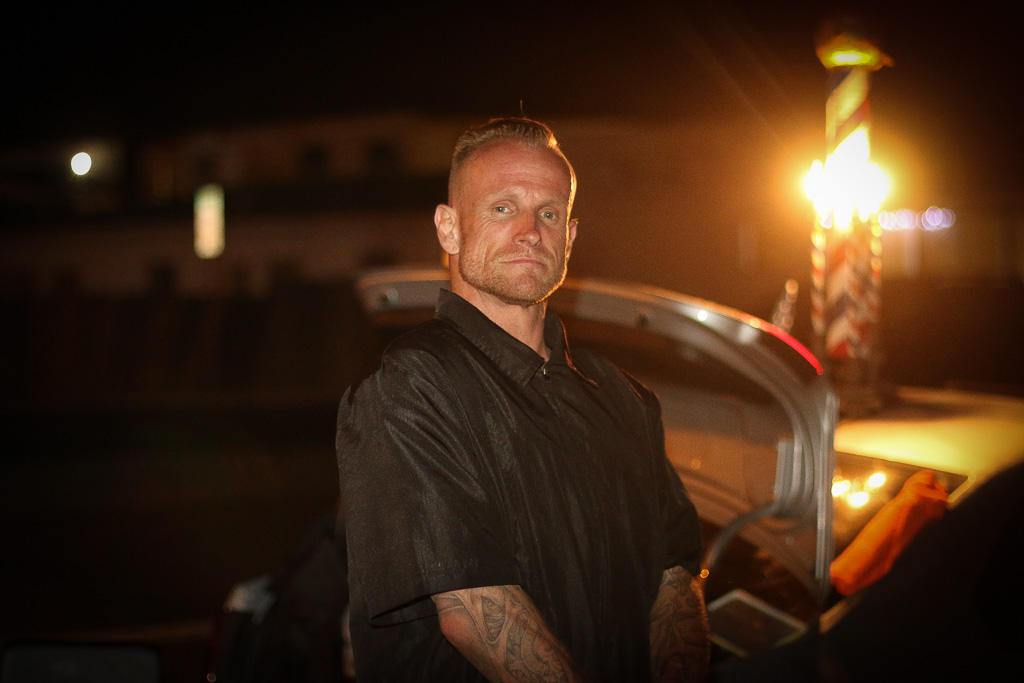 Cutting it Close: Mobile Barber Looks to Give Back, Start Anew

Stored in the back of a silver compact car were shearers, shaving cream, clippers and other essentials a barber would need.

Royce Kling, a San Clemente resident, wasn’t trying to take this equipment to a brick-and-mortar location. The car is his shop. His business card reads “Your Mobile Barber,” except Kling said he doesn’t take any money for haircuts and shaves, services he provides to members of the United States Marine Corps for free. He said he’s trying to do right by society after several brushes with the law.

Kling’s barber’s pole is fastened to the top of the car and was one of the few illuminations on a Sunday night near the corner of Avenida Granada and El Camino Real, where he typically sets up his pop-up shop. Working by dark, his girlfriend and her children assist Kling by holding up a light and other materials.

According to Orange County court records, dating back to 2008, Kling was arrested for breaking and entering, car theft, manufacturing illegal drugs, possession of such substances and other minor misdemeanors and low-level felonies. He said he has since gotten off parole and started a new life.
“I’ve cut hair for more than 12 years, mostly in prison,” Kling said. “This last time I got off parole, I had a goal to become a barber.”

His last sentence came in 2013 for a controlled substance charge that was dismissed and he’s kept his record clean since then.

“This last sentence was pretty rough,” Kling said, adding most of his sentence was in segregated housing, or solitary confinement. “Somehow, some way I was able to get through that. I attribute everything to God, no matter how many mistakes I’ve made.”

Royce Kling spent years in prison for a laundry list of convictions related to drugs, theft and other miscellaneous crimes, none of which were violent crimes. He now seeks to provide haircuts to those who can’t afford them. Photo: Eric Heinz

Royce Kling, left, gives a kiss to his girlfriend, who helps light his free barber operation for Marines. Kling has set up near the corner of Avenida Granada and El Camino Real for the last few weeks on Sunday nights.

Royce Kling spent years in prison for a laundry list of convictions related to drugs, theft and other miscellaneous crimes, none of which were violent crimes. He now seeks to provide haircuts to those who can’t afford them. Photo: Eric Heinz

Kling said he was working at a local barbershop until he decided to venture out on his own. He claims what he’s doing doesn’t violate any laws as he’s not charging for the cuts. The California state statute that governs barbering requires people to obtain a license if they perform such services, but it doesn’t define whether someone takes money or not as a contingency.

When asked if he is concerned about cutting the market for traditional barbershops, Kling said he doesn’t want to be a competitor, but he wants to be able to help those who don’t have the money for haircuts and shaves.

“A lot of my clientele doesn’t know that I’m out here, and when they do, I hope they come and find me,” Kling said. “None of us are perfect, and sometimes we let our fears override our common sense, and it makes things worse.”

Kling takes pride in his work, but it’s not his only craft. In addition to giving Marines free haircuts, Kling said he wants to provide services to homeless people who cannot afford to get a trim.

“I’ve taken so much from this world and from people around me my whole life,” Kling said. “This is all about paying it forward.”

Kling, “Your Mobile Barber,” is available for cuts and shaves on Sundays in San Clemente and can be reached at 949.600.0237.