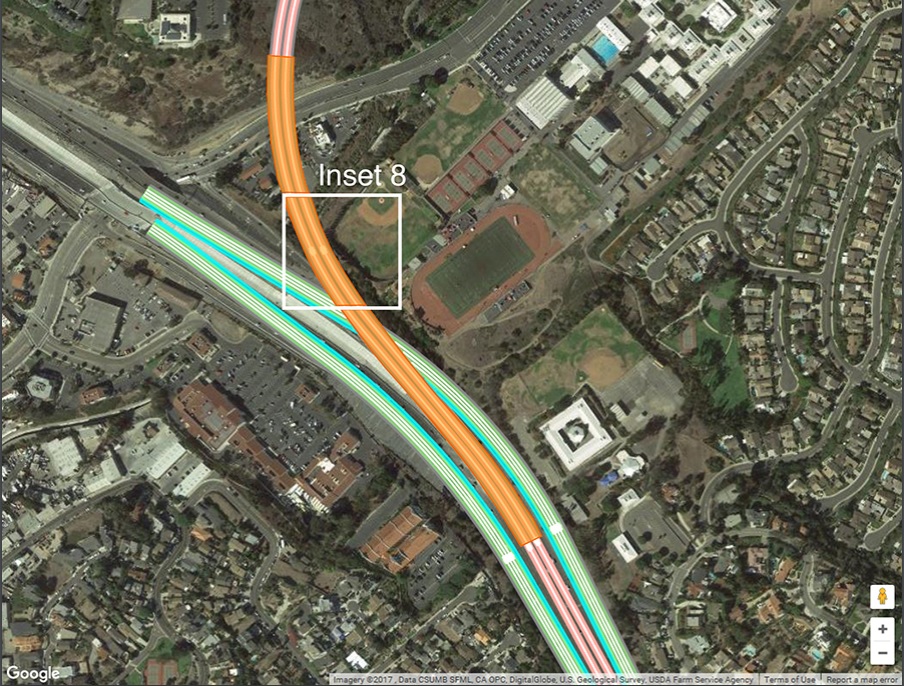 Images from the Transportation Corridor Agencies (TCA) show that one of the proposed toll roads through San Clemente—and the most talked about around the city—would require doubling the size of I-5 and could include access ramps throughout its path.

Mark McGuire, a member of the Coalition to Save San Clemente, spoke to City Council on Nov. 21 about a meeting he had with TCA CEO Mike Kraman. During that meeting, Kraman confirmed that should 14 be the selected path, the TCA would have to increase the lanes on I-5.

The significance of this, McGuire said, is that it would undoubtedly require eminent domain to be enacted, especially in southern San Clemente where I-5 abuts the walls of the highway.

“We’ve gone through every layer of city general plan enactments, Measure V and land use (documents) and a stack of specific plans that have been adopted,” Smith said. “What we’ve done is gone through any designation of right of way for the 241 extension through San Clemente. And now that the extension is a possibility, we wanted to bring forward those cleanup amendments.”

Smith said they’ve received report support from the homeowner’s associations that own the land, which could be there by year’s end.

The city has also moved to have its lawsuit against the TCA’s process in putting toll roads through San Clemente to Riverside County Court from Orange County, which Smith said would be a “more neutral” court.

The next joint board meeting of the TCA’s Foothill/Eastern and San Joaquin Hills corridor agencies will take place at 9:30 a.m. on Thursday, Dec. 14 at The Toll Roads headquarters, located at 125 Pacifica in Irvine.