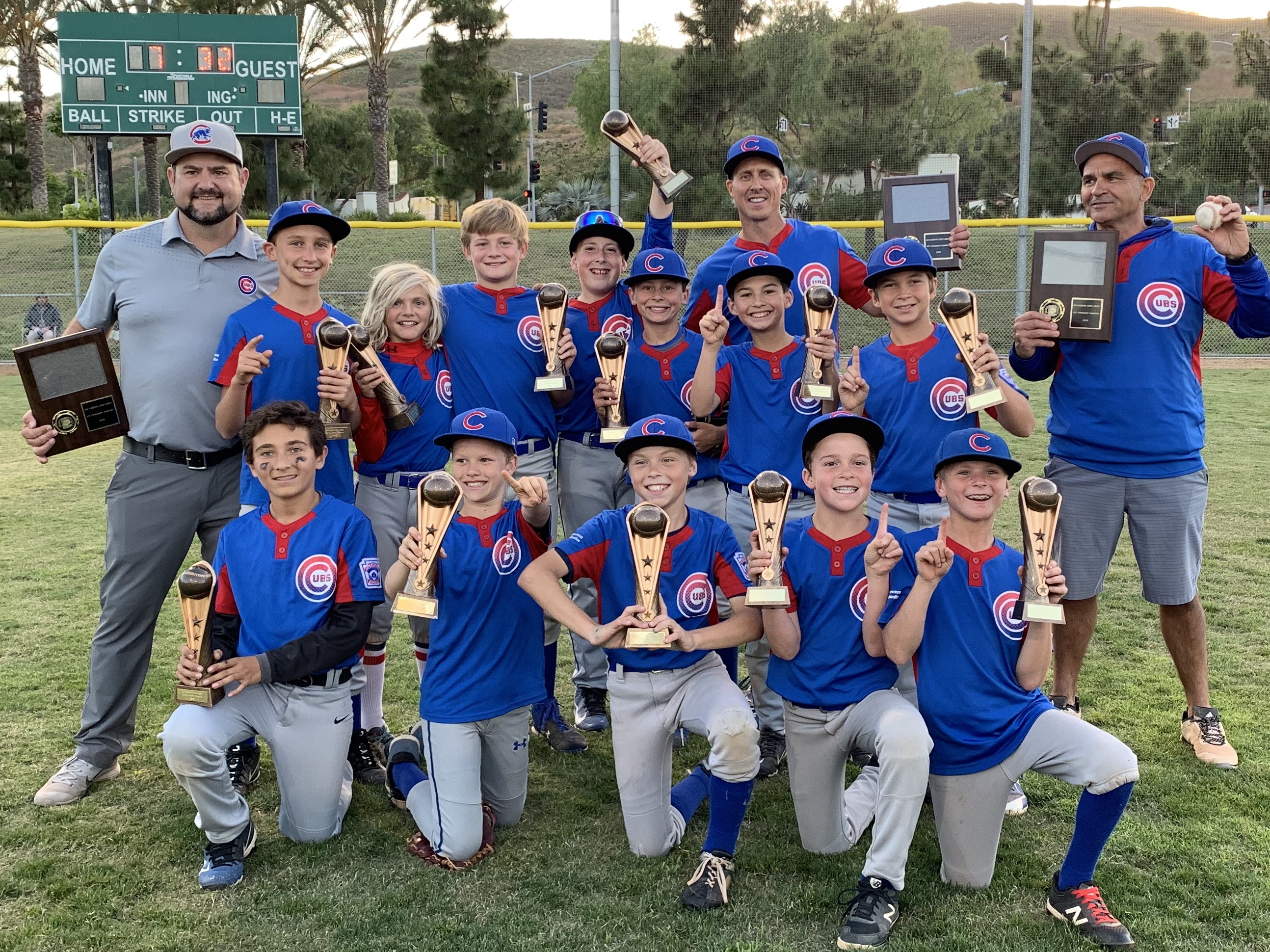 The San Clemente Little League hosted its city playoffs over the past week, and four champions were crowned in the Majors and AAA divisions.

In Majors, the highest division with predominantly 11-year-olds, the Cubs claimed the National bracket championship on Friday, May 24 at Vista Hermosa Sports Park with an undefeated run through the playoffs. The Cubs beat the Pirates, 6-4, and shut out the Cardinals, 2-0, to advance to the championship game.

In the championship, the Cubs took on the Cardinals again, but they trailed, 2-0, through four innings. In the fifth, the Cubs rallied with hits by Owen Goulet, Caden Teeple, Luke Mogavero, Luke Karidis, Jesse Ewell and Gavin Wojtkiewicz for a 5-2 lead and eventual win. Otto Graham was also strong on the mound.

In the American bracket, the Red Sox were pushed to a second championship game in the double-elimination tournament, but they outlasted the Yankees in extra innings, 3-2, on Tuesday, May 28 at Vista Hermosa Sports Park. The Red Sox are 13-3 this season.

The Red Sox clobbered the Astros in the opener, 12-0, and beat the Yankees in their first game, 5-4, to advance to the championship. The Yankees fought their way to the title matchup and forced a second game with a 5-2 win before the Red Sox’s ultimate victory.

The Cubs and Red Sox will both represent San Clemente at the District 68 Majors Tournament of Champions, which begins Saturday, June 1 at Cox Sports Park in Ladera Ranch.

The Cubs took the National title on May 22 at Vista Hermosa Sports Park with an offensive outburst in a 19-7 romp over the Cardinals. The Cubs opened with a bye and then crushed the Mets, 12-5, to advance to the championship. The Cardinals forced a second game with a 4-1 win on May 18 before the Cubs finished it off.

The Angels and Cubs will play in the District 68 AAA Tournament of Champions beginning Saturday, June 1 at Gilleran Park in Mission Viejo.

San Clemente Girls Softball crowned one of its own as champion of its annual Memorial Day Tournament on Monday, May 27 at Richard T. Steed Memorial Park.

San Clemente Girls Softball hosts the 70-team, seven-division tournament each year, and the Rampage posted an undefeated record to take the 10U Silver Division title on its home field.

The Rampage dominated its two pool-play games with a 8-2 win over Capo and a 16-0 win over UC Del Sol. In the bracket, the Rampage advanced to the title game in wins over two Northshore teams, 8-7 and 6-4, and beat out Diamond Bar in the semifinals, 12-8.

In the title game, San Clemente and Brea traded runs to forge 4-4 tie after four innings. The Rampage took the lead in the fifth inning and held off Brea through the seventh for the 5-4 win.

The Our Lady of Fatima seventh- and eighth-grade coed soccer team posted a thrilling, 2-1 overtime victory to capture the Parochial Athletic League championship on May 9.

Our Lady of Fatima pushed into double overtime against Stoneybrooke, and with 30 seconds remaining, Joey Gegenfurtner scored his second goal of the game for the win and the title.

Participants will be helping to raise money for youth programs in the city. The programs include swimming and recreational scholarships for underprivileged children and the Fun-on-the-Run children’s mobile education program.

The entry fee is $500 for foursomes and $150 for individuals, which includes food, carts, beer and drinks on the course followed by dinner, wine and awards. Rainbow Sandals will also donate a pair of sandals to each participant, and there will be an opportunity drawing for other prizes.