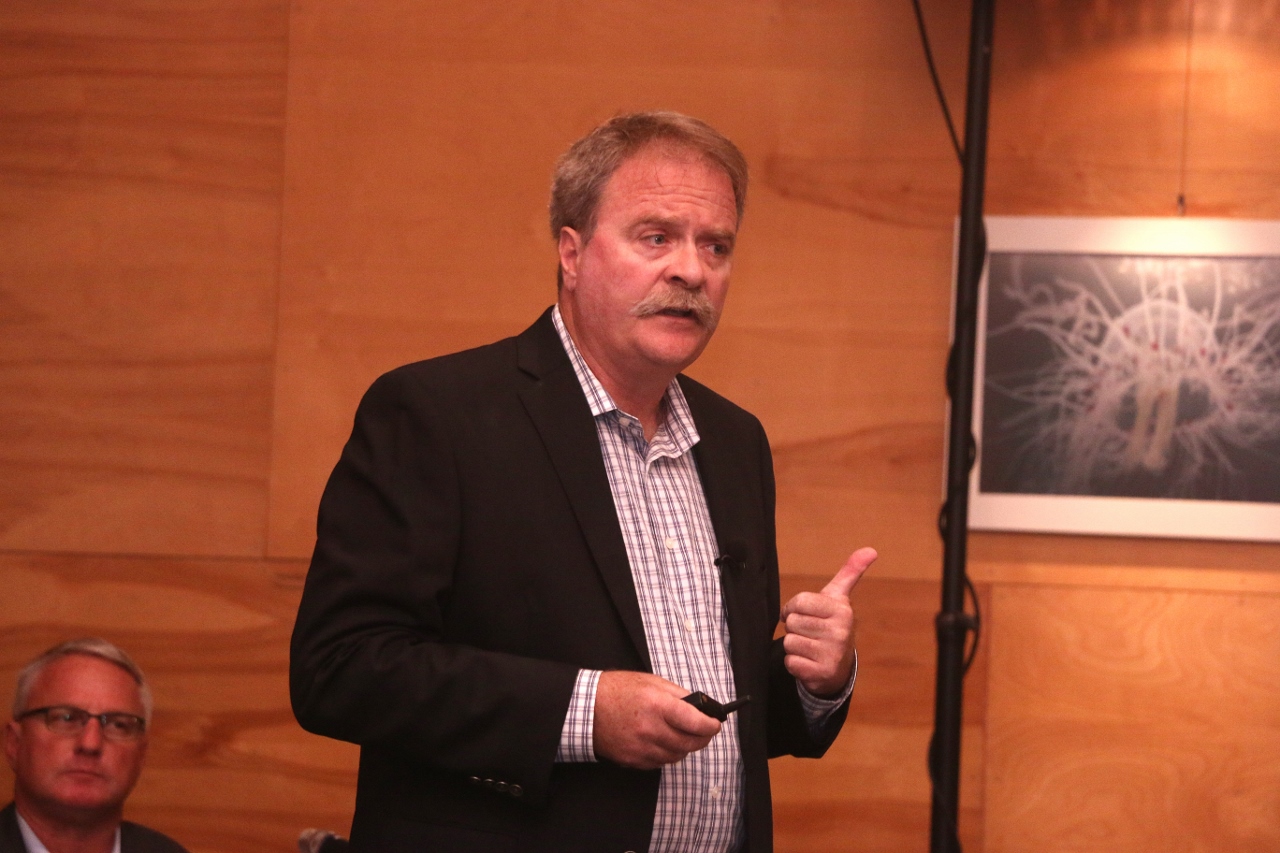 Team of Geologists Say Threats of Earthquake, Tsunami to SONGS not as Dire as Believed

Major earthquakes and tsunamis that could threaten San Onofre Nuclear Generating Station (SONGS) are probably less of a problem than once perceived, according to geologists who studied the seismic landscape of the area for six years.

But that doesn’t mean they can’t happen, they said.

At the Community Engagement Panel meeting on Thursday, Feb. 16, hosted at the Ocean Institute in Dana Point, Dr. Neal Driscoll, a professor of geosciences at the University of California-San Diego’s Scripps Institution of Oceanography, gave a presentation of the findings from the research his team conducted. Driscoll said the research has been vetted by peer review.

Horizontal shifts along the Southern California coastline could be capable of producing earthquakes as strong as 7.4 magnitude on the Richter Scale. The measurements from the study incorporated a “complex equation,” Driscoll said, that involves the Wells-Coppersmith measurement, which takes into account the distance and force of the epicenter of an earthquake.

Most of the study examined the Newport-Inglewood/Rose Canyon fault lines, which exist along the Southern California coastline.

According to SCE officials, the power plant and dry cask storage containers can withstand more than a 7.4-magnitude earthquake could bring.

Certain pockets of “active” fault lines—lines that have shown activity within the last 10,000 years—were detected during the study, and they have the potential all to go off at the same time, from Newport to south of San Clemente.

The reason for this is the geologic features that separate each fault pocket are not situated to prevent a chain reaction from occurring, Driscoll said.

In addition, some of these blocks along the faults are moving south, away from SONGS and not toward it, as opposed to what was recently hypothesized, Driscoll said.

Certain features of San Clemente’s coastline—and the area just west of it—are not suitable for tsunamis, Driscoll said. The bathymetry (the measurement of depth of water) gives the San Onofre location a “unique” buffer, Driscoll said.

The area was studied by new technology that allows for 3D, high resolution imaging, which was used to assess the area, according to the report.

The two types of tsunamis that could be created by earthquakes include near-field tsunamis, which happen when vertical movement of fault lines takes place; in this case, people nearby would have minutes to a half hour to evacuate, if necessary. With far-field earthquakes, people can detect them earlier and give warnings, Driscoll said.

Since the 2011 Fukushima Daiichi disaster in Japan in which a nuclear power plant released radiation in its surrounding areas and into the Pacific Ocean, many people have voiced concerns over SONGS’ ability to weather a giant tsunami.

The information provided did not do much to comfort skeptics of all things SONGS, who said during public speaking that even if there is lesser risk of these natural disasters, they still question the quality of the canisters that have been selected to store the spent nuclear waste.

Torgen Johnson spoke at the meeting and cited a 2005 study published by Gerald G. Kuhn that differs with the research presented by Driscoll. Johnson also questioned the strength of the canisters and their reliability.

Charles Langley, executive director of Public Watchdogs, spoke during the CEP meeting on Feb. 16. Langley and his organization has been outspoken against the storage of spent nuclear fuel at SONGS as well as its track record with transparency. Photo: Eric Heinz

Dr. Neal Driscoll of the University of California-San Diego gave a presentation about seismic activity near SONGS, which included six years of research. Photo: Eric Heinz

Robert Pope, a geologist and environmental scientist, has spoken against some of the claims made by speakers at CEP meetings. Pope described a dangerous scenario at a meeting last June should the active radiation at the power plant be released into the atmosphere. Photo: Eric Heinz

“When you canister fuel, you can’t have it jostled around,” Johnson said. “The problem is you can’t monitor it for leaks or cracks … (and locals just have to) cross their fingers that everything will be OK for the next million years.”

Johnson said he was not reassured by anything Driscoll said because the research incorporated sediment configuration in the area, which he said is unrelated.

Holtec International, the company that has been awarded the contract to make the canisters that will store the remaining spent fuel at San Onofre Nuclear Generating Station, has asserted at past meetings that the canisters can withstand more force than the shockwaves generated by the most powerful earthquake ever recorded—about 9.5 magnitude—but skeptics have raised other questions regarding the thickness of the units and reliability.

Angela Mooney D’Arcy, the founder and executive director of the Sacred Places Institute for Indigenous Peoples, said she would like to see a representative on the CEP from the Acjachemen-Juañeno Band of Mission Indians. The reason for this, D’Arcy said, is because it is a requirement, as part of the National Environmental Protection Act, to notify native tribes of ongoing activity at sites of tribal importance. The tribe’s sacred land of Panhe is located just north of SONGS and is within the jurisdiction of Camp Pendleton.

Matt Martson of AECOM, who is leading his company’s portion of the project, said at least two-thirds of the jobs needed for the decommissioning would be filled by people from the local area. He also said lots of resources would be purchased in South Orange County.

Proponents of the bill hope that a facility in New Mexico or Texas will accept the fuel until the Department of Energy finds a final home for it. As it stands, the spent nuclear fuel is expected to be taken from the cooling pools, where it is now, to dry cask storage by 2020 or 2021, and could be shipped out of the area by 2025, if the act is amended.

Col. Doug Applegate, who ran for Congress in California’s 49th district, which includes San Clemente and SONGS, said during the meeting that people must contact their representatives if they want anything regarding current legislation of the interim nuclear storage bill to gather momentum.