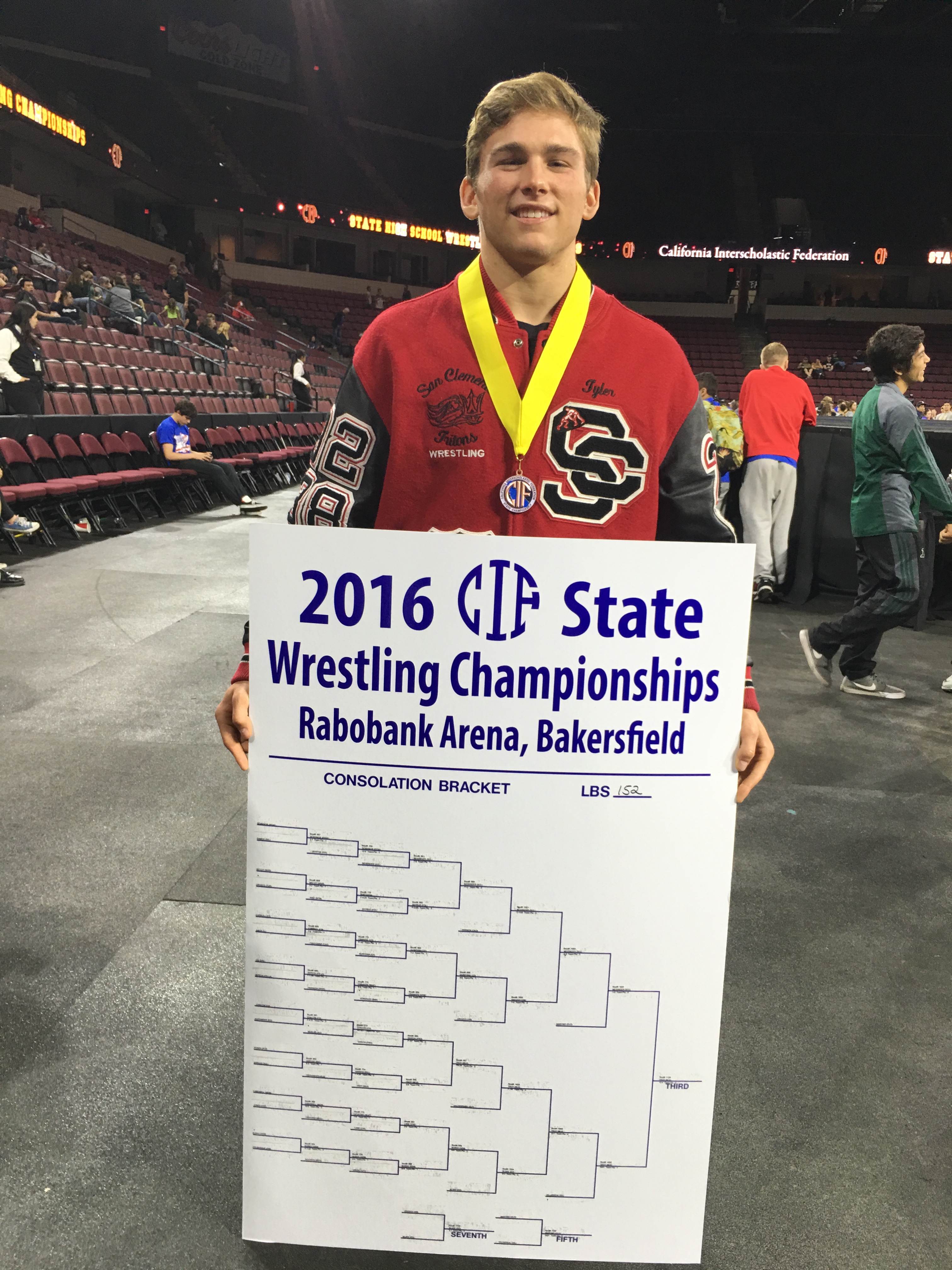 For in-game updates, scores, news and more for all of the San Clemente High School spring sport programs, follow us on Twitter @SouthOCsports.

San Clemente senior wrestler Tyler Meisinger continued his stellar 2016 campaign at the ORCA Duals in Washington on March 12. The ORCA Duals consists of three all-star teams from Washington, Oregon and California competing against each other.

Meisinger, who was invited to represent the Golden State, defeated Oregon state champion Tristin Molanari 7-3 at the event, and defeated Washington’s Division 4A state champion Adrian Avena by pin.

Meisinger qualified for the National High School Wrestling Championships in Virginia earlier this month and will head to the prestigious tournament on March 31, according to San Clemente head coach Mark Calentino.

The San Clemente baseball team found success in the Anaheim Lions Tournament this week. The Tritons (8-2-1, 1-1) are currently 2-0-1 in the tournament and were slated to play Kennedy on March 30. Results were not available at press time.

San Clemente started the tournament off with a 5-4 extra innings victory over Palos Verdes on March 26. The game lasted 12 innings and Jake Mills ended up as the winning pitcher after going six innings. San Clemente’s Evan Banks went 3 for 6 with 2 RBI and Eric Burckle went 2 for 4.

The San Clemente offense exploded for its highest run output of the season in the afternoon game on March 26, defeating Murrieta Valley 15-8. Cole Asakowicz went 4 for 4 with 2 RBI and Ryan Russell went 4 for 5 with 3 RBI to lead the Triton bats.

Prior to entering the tournament, San Clemente lost 2-1 to Laguna Hills in its Sea View League opener on March 24.

The San Clemente boys lacrosse team could not hold on to an early lead over visiting Palos Verdes in a nonleague game on March 26, as the Sea Kings came back and emerged with an 11-6 victory.

San Clemente (4-4) had a 4-1 lead in the first quarter, but were shut out by the Palos Verdes defense for the entire second and third quarters. San Clemente did not score again until the fourth quarter.

San Clemente was set to play Tesoro in a league game on March 30. Results were not available at press time.

The San Clemente and Capistrano Valley girls lacrosse teams entered the second half of their South Coast League matchup tied 4-4 on March 24. Both teams’ defenses clamped down over the final two quarters, but the Cougars came out on top, 6-5.

Kiley Buckley scored twice and Victoria LeCause and Shay Hefft each scored once for San Clemente (4-6, 0-2).

The San Clemente boys golf team improved to a perfect 5-0 on the season following back-to-back wins over San Juan Hills on March 22 and March 23.

San Clemente will host El Toro in a league match at Shorecliffs Golf Club on April 19.