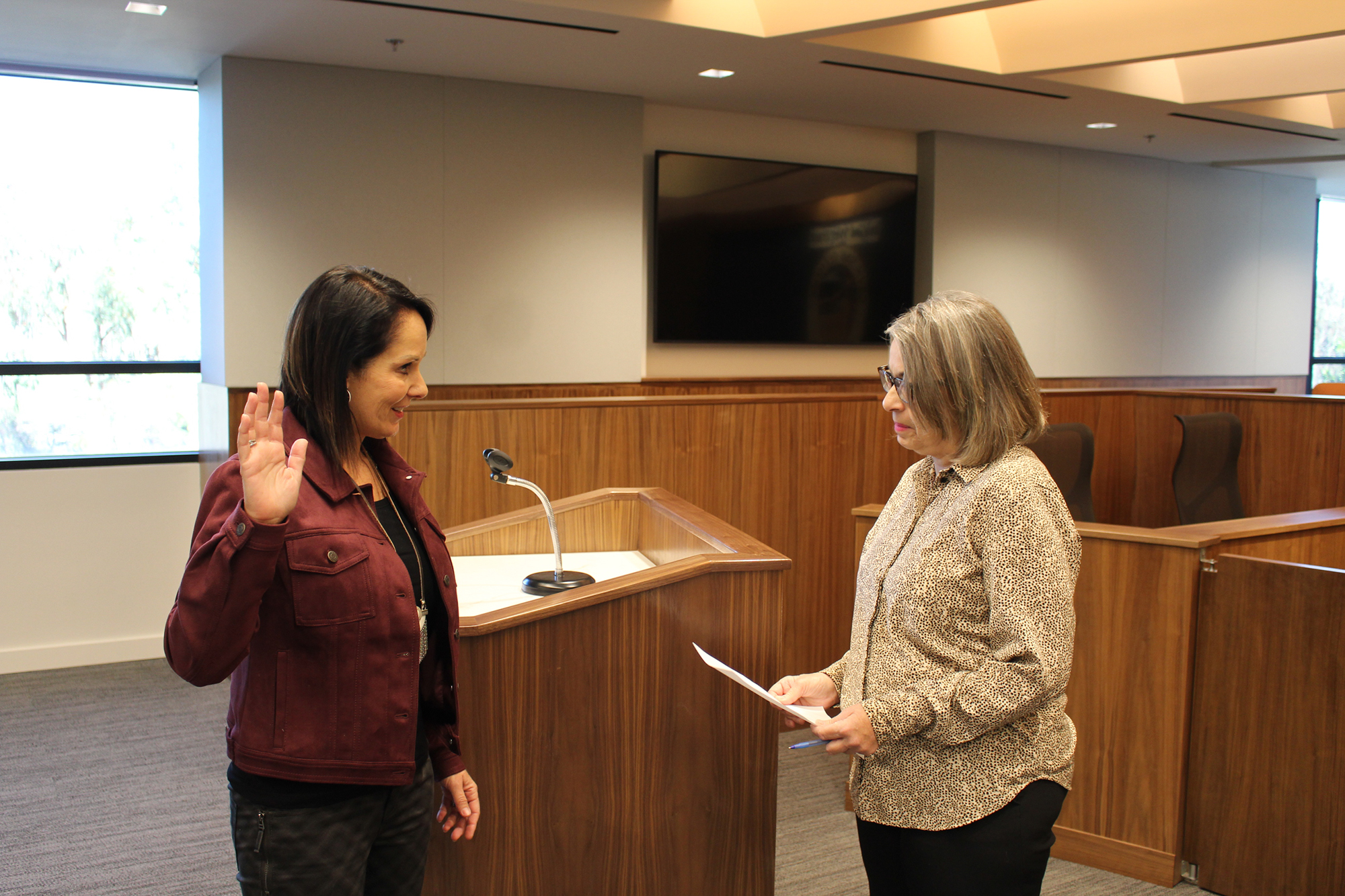 In her final act as San Clemente’s city clerk on Friday morning, Nov. 18, Joanne Baade swore in longtime coworker and friend Laura Campagnolo as her successor. Campagnolo then turned right around, performing her first action on the job, to swear-in Charlie Smith as the town’s new city treasurer.

The occasion was an emotional affair as colleagues were present in the City Council Chambers of City Hall to watch Baade turn over her position, after serving three and a half terms in the elected official role and 36 total years working with the city.

“The city’s going to be in great hands,” she said. “I loved serving this city. I still live here, I’m available to help, and (San Clemente) will be fine.”

Baade then rushed off to fulfill babysitting duties as a grandmother, something she’ll look to do more often as expressed in her Oct. 1 resignation letter.

Friday’s event occurred after the City Council met Thursday afternoon, Nov. 17, to interview candidates they wanted to replace the outgoing Baade and former Treasurer Mark Taylor, who submitted his resignation on Oct. 2.

Taylor, who was initially appointed to the role in early 2013 and won subsequent bids for reelection, including in 2020, was not present for the swearing-in ceremony.

Mayor Gene James spoke glowingly of Baade, recognizing the “amazing job” that the detailed and focused former clerk had performed in her career with the city. James also said that he has enjoyed working with Campagnolo since his election to the council in 2019 and that she would be able to pick up right where Baade left off.

“I think it’d be fair to say you were Joanne’s protégé, (and) she was your mentor,” James told Campagnolo. “She did a great job.”

James added that Smith, who campaigned for a council seat in 2020 along with James, had a background that placed him well above the competition. He expressed confidence in Smith’s ability to continue Taylor’s work as a good steward of the city’s finances.

“I just wanted to wish Joanne the very best in her retirement, and wish Laura the very best going forward,” James said. “We won’t see one blip on the radar screen in differences between what Joanne did and what Laura (will do) because of Joanne’s tutelage.”

Smith’s involvement with San Clemente dates to his time as a Beaches, Parks & Recreation commissioner in 2016 and on the Coastal Advisory Committee.

The new treasurer said his family’s presence Friday and support in his new venture meant the world to him.

“I think, first and foremost, (my responsibility) is to ensure that we keep the capital in this city as safe as possible,” said Smith, adding, “Secondarily, (it’s) trying to figure out if there’s things we can do that enhance on the margin.”

Smith respected the job Taylor had done and maintained that he wanted to avoid dramatic changes, yet he desired to bring in his experience to improve financial aspects when appropriate.

Campagnolo, who has worked within both the city manager’s and city clerk’s offices in her 16 years with the city, said she was familiar with dealing with both the public and internal matters that include staff, council, and commissions.

She added that she has learned an abundance of information while working alongside Baade, who has won awards for her work.

“Joanne is very diligent, and I think she ingrained in all of us that the bar needs to always be high in how we deal with, again, internal employees, the public, elected officials, everybody,” said Campagnolo.

Campagnolo expressed a need for her office to respond to challenges it faces, to be efficient, and provide quality customer service.

“Everything that goes to City Council begins in different departments but comes to us; we push it out through the agenda, and then everything finishes through us,” Campagnolo said. “So, ordinances, resolutions, contracts, all of that. We need to be at the top of our game every day.”